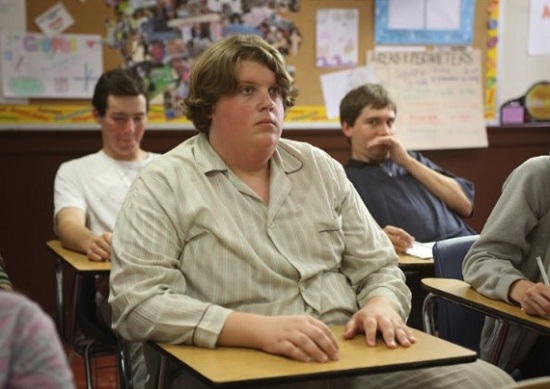 Wysocki plays the lead character Terri Thompson in “Terri” ( a pretty astonishing star turn), an overweight high school student who is abandoned by his parents to his mentally flagging Uncle James (Creed Bratton of “The Office,” doing a complete and memorable 180 from anything we’ve seen him in) in a small, wooded Midwestern town. Like a blown-out breeze of a kid, Terry shlumps into class wearing only his pajamas, and can barely muster up the effort to care about the itinerant teasing and badgering gently yet deftly inflicted upon him by his classmates. The weight on his shoulders seems undefined yet pretty dense. Wysocki’s performance defines the film as a new type of teen movie- a mainstream film with actual teenagers in it- not at one extreme of the adorable, sassy extreme, or the wicked-slash-drug-doing-slash classic indie film-versionized other. Wysocki’s “fat kid” portrayal here is neither jolly or wisecracking nor self-loathing and hell-bent on destruction. He appears to be, quite simply, tired and bored- like most teenagers historically represent themselves. He is deadpan funny and gracefully enlightening in this exacting, momentous performance.

Jacobs has a keen way of filling us in on the details without telling us much- which is, quite happily for the audience, how one’s high school experience probably was for most of us. It works so very well here, his way of letting the film breathe, and just as we are getting a feeling of the movie’s off-kilter atmosphere, in strides John C. Reilly.

Who doesn’t love him, first of all? He can do no wrong, it seems, and casting Reilly, as Vice Principal “Mr. Fitzgerald,” was the perfect complement to a cast of characters that is rounded out only by their own sense of feeling terribly lost. Mr. Fitzgerald is someone who wants to make a difference, and does this by befriending and trying to become a defacto mentor to all of the misfits in the school. Soon, Fitzgerald is inviting Terri into his office for malted milk balls and guy talk. What happens may sound predictable, but in the hands of Reilly and Wysocki, something truly beautiful develops: A real friendship, with genuine give and take, and the realization that everyone, always, is forever growing up.

Bridger Zadina plays Chad- truly one of the sweetest, funniest and most oddball high school outcasts in recent cinematic history, and Olivia Crocicchia plays Heather, the object of first systematic lust, then derision, by the entire high school student body. Heather first comes across as every high school girl termed “slut” always does- oddly powerful and simultaneously powerless. The scene in the shed will leave many recalling how an innocent night can turn somehow oddly dangerous right after one hits puberty, and the turn the film takes is quickly brought back to life, just as soon as the characters sober up themselves. The film seems to have the steady heart of an actual life rhythm, and really is one of those films that leaves you guessing – is it Jacobs, the actors, the writing, or all three that pumps the life blood through it? Novelist Patrick DeWitt (author of “Ablutions” and “My Brothers Sisters”) turned in an amazing freshman effort here, and Jacobs himself told me that they were in constant communication as DeWitt turned in first pages. It all works perfectly well.

Not formally perfect, stylized or over-produced in the least, Terri is a movie to watch, enjoy and revel in. We will hopefully be seeing much more of Azazel Jacobs work in the future. Go and see this film this weekend. Vimooz highly recommends it…