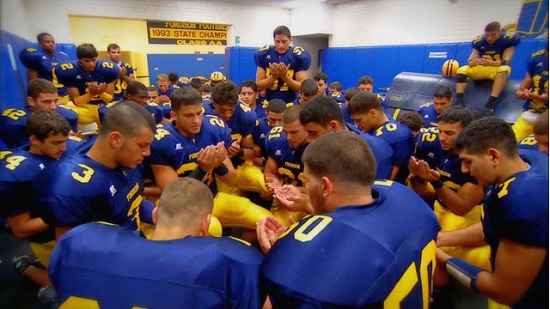 The award-winning documentary film, Fordson: Faith, Fasting, Football, has a release date; the film about high school football and Arab-Americans living in post 9-11 America will open exclusively at select AMC Theatres in 11 cities on Sept. 9, 2011.

‘Fordson: Faith, Fasting, Football’ is a feature length documentary film that follows four talented high school football players from Dearborn Michigan as they gear up for their big senior year rivalry game during the last ten days of Ramadan, a month when Muslims traditionally fast every day from sunrise to sundown.

The film begins on September 11, 2009 and concludes at the end of Ramadan ten days later. The story is set against the backdrop of the stunningly beautiful Fordson High School, a public high school built by Henry Ford in 1922, which was once all white, but now boasts a 98% Arab population. As our team readies itself to play its affluent, cross town rival, we unearth the adversity faced by a community that is desperately holding onto its Islamic faith while struggling to gain acceptance in post 9-11 America.

‘Fordson’ documents not only the players’ outer struggle to overcome the hunger and thirst of fasting as they prepare for the big game, but also their inner struggle to reconcile their Arab heritage with their American birthright. It is an inspirational story of an immigrant community’s resilience, that attempts to answer the question, ‘Who is an American?’

Through the eyes of the team, their coaches, and their fans, we get an unprecedented glimpse inside the lives of a community that is home to the largest concentration of Arabs in any city outside of the Middle East, and their determination to hold on to the American Dream.