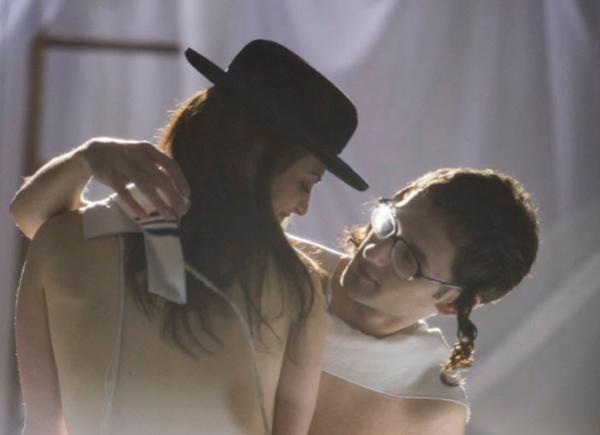 San Francisco Bay Area based distributor Nancy Fishman Film Releasing announced that it will release Eve Annenberg’s “Romeo and Juliet in Yiddish,” described as a gritty, funny New York drama about encounters between Satmar Hasid bad boys and the work of Shakespeare.  Directed and produced by Eve Annenberg, “Romeo and Juliet in Yiddish” will be released nationally to theaters through Nancy Fishman Film Releasing, and internationally to festivals and broadcasters.

The play Romeo and Juliet has been translated around the world. Now Eve Annenberg’s quirky new feature film sets William Shakespeare’s Romeo and Juliet in contemporary New York City with Brooklyn-inflected English and Yiddish spoken by a talented cast. A jaded middle-aged E.R. nurse with a chip on her shoulder about the Ultra Orthodox is assigned a translation of “Romeo and Juliet”—from old Yiddish to new Yiddish—in her pursuit of a Master’s degree. In over her head, she accepts help from some charismatic and ethically challenged (a.k.a. scamming) young Ultra Orthodox dropouts. When another ex-Orthodox leaver enchants her apartment with Kabbalah magic that he is leaking due to over studying, the boys begin to live Shakespeare’s play in their heads, in a gauzy and beautiful alternate reality where everyone is Orthodox.

In what might be the first Yiddish “mumblecore” film, Annenberg creates a magical universe (set in Williamsburg, Brooklyn), where Romeo and Juliet hail from divergent streams of ultra-Orthodox Judaism and speak their lines in street-smart Yiddish. The Bard may have never dreamed of the Montagues as Satmar Jews, but Annenberg’s fanciful direction makes the story of feuding Orthodox families both poignant and timeless. As they start to “modernize” and act in the archaic play, the young men fall under its rapturous incantation. Annenberg’s utterly enchanting meditation on life and love in New York yields a rapprochement between Secular and ultra Orthodox Worlds. “Romeo and Juliet in Yiddish” magically explores how everyone—from a jaded E.R. nurse to edgy black-hatted slackers—falls under the spell of love and Shakespeare.

Talihina Sky: The Story of Kings of Leon Documentary to Premiere on Showtime