Bollywood actor, filmmaker, and activist Puneet Issar Tackles Discrimination in I Am Singh 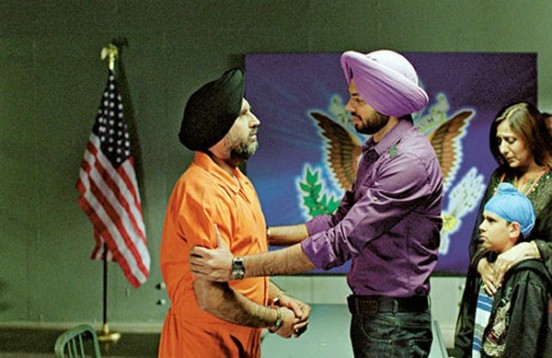 I Am Singh, a new film directed by a veteran Bollywood actor, Puneet Issar, opens today in 50 theaters across North America. It explores the untold story of Sikhs in the post-9/11 U.S. who were subject to discrimination and violence, and targeted as possible terrorists. It is Issar’s second film as director, and he also acts in it. The film does not have a Bollywood star-studded cast, like his first film had. The actor/director told glamsham.com that he wanted his subject to be the star of the film.

I Am Singh focuses on a young Sikh named Ranveer Singh (Gulzar Chahal) who lives in India. His brothers are citizens of the U.S., and when he learns that one of them has suddenly died, the other gone missing, and his father seriously injured, he takes a journey to find what the cause was. He is met with elusive answers and frustrating excuses from authorities and governmental officials. Without any help from local authorities, he teams up with a Pakistani, Rizwan Haider (Rizwan Hyder), who is an American citizen, as well as Fateh Singh (Puneet Issar) a LAPD police officer. He also eventually finds two American attorneys, Amy Washington (Amy Rasimas), a Senior Attorney, and Amelia White (Brooke Johnston), a human rights activist, to fight for his case. With the help of this diverse group of citizens, Ranveer Singh battles injustice while still having faith in the American judicial system to help his family and his people who have been wronged by a country paranoid with fear of outsiders.

This is an important and intriguing new Bollywood film, exploring the ignored story of Sikhs living in post 9/11 America, told from their own point of view.