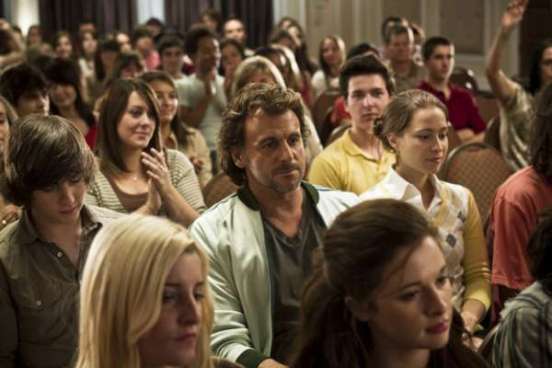 The 23rd Annual Palm Springs International Film Festival (PSIFF) wraps today Monday with the Best of the Fest screenings but announced this year’s award winners at a luncheon on Sunday, January 15, 2012.

AUDIENCE AWARDS
This year’s Festival attendees selected Starbuck (Canada) directed by Ken Scott, as the Mercedes-Benz Audience Award Best Narrative Feature. The past comes back with a vengeance in this Canadian comedy about a class action suit against prolific sperm donor David Wozniak, aka Starbuck. Twenty years after his successful moneymaking scheme, all David’s 142 children want to know is, “Who’s my Daddy?”

The runner-up film was Come As You Are (Belgium) directed by Geoffrey Enthoven. The other narrative films in alphabetical order include: The Flowers of War (China), If I Were You (Canada), In Darkness (Poland), Monsieur Lazhar (Canada), Salmon Fishing in the Yemen (UK), Simon and the Oaks (Sweden), A Simple Life (Hong Kong), Sonny Boy (Netherlands), War of the Buttons (France) and Wunderkinder (Germany).

The Girls in the Band (USA) directed by Judy Chaikin and Wish Me Away (USA) directed by Bobbi Birleffii and Beverly Kopf tied for the Audience Award Best Documentary Feature. The Girls in the Band is about the hidden history of women jazz musicians in this glorious celebration of some of our greatest musicians, period. Wish Me Away is the inspiring, award-winning documentary about courageous singer-songwriter Chely Wright, a devout Christian who also happens to be a lesbian.

Both winners will receive the John Kennedy Statue (“The Entertainer”) specially designed for the Festival.

FIPRESCI AWARD
A special jury of international film critics reviewed 40 of the 63 official Foreign Language submissions to the Academy Awards® screened at this year’s Festival to award the FIPRESCI Award for Best Foreign Language Film of the Year. The jury selected The Turin Horse, Hungary’s official entry for the Best Foreign Language Film Oscar, directed by Béla Tarr, “for the power of its austerity and radical commitment to its vision.” The film is an unforgettable end-of-days parable largely confined to an ascetic shack shared by an old man and his daughter as a terrible blight takes hold outside.

Matthias Schoenaerts received the FIPRESCI Award for Best Actor for his role in Bullhead (Belgium) directed by Michaël R. Roskam, “for his superb portrayal of an innocent and sensitive man trapped in a truculent body.” The ensemble female cast (Leila Hatami, Sareh Bayat and Sarina Farhadi) from A Separation (Iran) received the FIPRESCI Award for Best Actress, “for their naturalistic, powerful and fully interdependent portrayals of three women grappling with complex questions of guilt and morality.” The film is directed by Asghar Farhadi.

The jury stated “Although the story told in The House is not a new one, we felt that the direction and performances took the film to the next level, and made us understand why a father may not be able to let go of his children, and also why they would want to leave. The motivations behind the characters felt real and made for a compelling film about a girl’s journey to adulthood.” The film is about contemporary Eastern Europe’s divisions – between generations, genders, economic strata, city and country – are given incisive treatment in this affecting family drama about an ambitious teen, her disowned elder sister and their dour, controlling father.

THE JOHN SCHLESINGER AWARD
The Tiniest Place (Mexico), directed by Tatiana Huezo Sanchez, received The John Schlesinger Award, which is presented a first-time documentary filmmaker. The Tiniest Place is the heartbreaking yet hopeful story of Cinquera, a small town in rural El Salvador that was completely depopulated during the Civil War, as told by the survivors who have returned with astonishing resilience to rebuild their lives on their native soil. The winner receives the John Kennedy Statue (“The Entertainer”).

The films were judged by Mark Jonathan Harris, three-time Oscar-winning documentary director of Into the Arms of Strangers: Stories of the Kindertransport, The Long Way Home, and The Redwoods; Oliver Ike, director of theatrical and non-theatrical sales at Seventh Art Releasing; and Michael Lumpkin, Executive Director of the International Documentary Association (IDA).

THE HP BRIDGING THE BORDERS AWARD
Terraferma (Italy), directed by Emanuele Crialese, received the HP Bridging the Borders Award presented by Cinema Without Borders and Hewlett Packard, which honors the film that is most successful in exemplifying art that promotes bringing the people of our world closer together. In Italy’s Best Foreign Language Film Oscar submission, an elderly Sicilian fisherman who rescues a boatload of African immigrants, must decide whether to do what the law demands or what he knows to be right. The prize includes an HP 8560w Elitebook Mobile Workstation with a built-in HP DreamColor display, valued at $4000.

The Descendants and The Artist Lead the 69th Golden Globes Awards