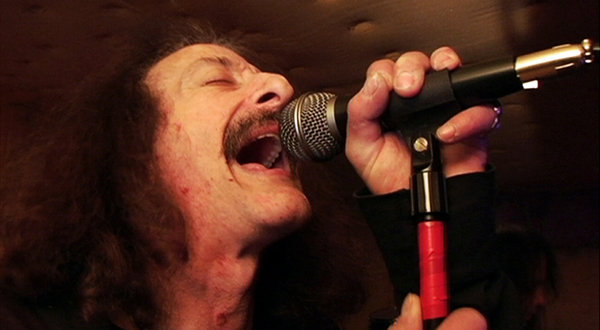 The new documentary “Last Days Here” (opening today March 2nd at the IFC Center in NYC) directed by Don Argott and Demian Fenton, had so much crazy subtext going on, it could be a few tiny little films in itself: The film focuses on “underground heavy metal legend” Bobby Liebling, the singer- songwriter-guitarist for the ‘70s metal band Pentagram. According to some rabid fans, Pentagram was the best metal band from that era, actually helping to form and create what soon became known as “heavy metal” music.

We are first introduced to adorable, bespectacled fan-boy and record collector extraordinaire Sean “Pellet” Pelletier, who enthusiastically tells us that a discovery of an old, vinyl Pentagram album wildly and permanently changed his life. From that point on, it would seem, Pellet has made it his mission to befriend, help, cajole and coax the nearly impossible Bobby, a very active user of crack-cocaine, to mend his ways and get the damn band back together. (As apparently do a great many thousands of other fans across the country.) Pellet’s genuine love for Bobby, as well as his almost obsessive dedication to Bobby’s music as his mission, is the true heart and soul of the film.

The different strains and levels of the story are what I found to be truly fascinating, apart from the much talked-about train wreck which is seeing Bobby (at times) disintegrate in front of the camera: Here we have a heroine and crack user living in the basement of his parent’s house, a place from which the far-older-than-he looks -fifty-four year old Bobby rarely ventures. His parents astoundingly know and enable his drug problem, sweet souls that they are, apparently terrified of what would happen if he was left on his own, and deal with is bouts of appealingly schizophrenic ravings.

Which, for me, got a bit strange. For a few moments, I found the film faltering, exploitative, and very, very hard-to-watch…(Although the editing in clever and the overall production value is quite good for the obvious low-budget, watching someone rant while on crack makes one feel confused about how to feel, to say the very least.) But then, things started to emerge and simmer.

The incredible part of the Liebling family history I found to be this: We are soon shown that Bobby’s father was an security advisor under both the Johnson and Nixon administrations. Flashback photos from the mid-sixties make Liebling, Sr. out to look like an earnest, uber-serious CIA agent. Bobby’s father was once the very picture of Sixties conservatism. Then to top off having a whacked-out metalhead for a son living in the “sub-basement,” his wife, (Bobby’s natural mother) blames their father-son “rivalry” as the very cause of Bobby’s drug problem. What is even more disturbing is how readily the lovely and elderly Liebling Sr. agrees with her. There is then inherent in the film the incredible commentary about one generation producing what is probably its worst nightmare; the story is only unique in the way both parents seem to really adore and genuinely respect their itinerant son.

There are the poignant reminiscences of former Pentagram bandmates, who tell of not once but two times Bobby blew the biggest chance they had to make it big. (Once members of KISS came to their home to see them perform in the 70s, only to be shooed away by an irate landlord; the second time a famous rock-n-roll producer actually working with them stormed out on their demo recording because of Bobby’s unbearable histrionics, never to return again.)

And in the midst of all of this the super-positive and patient Pellet, trying desperately to conjure together a compilation record deal and national tour. Bobby also inexplicably manages to fall in love with an uncommonly beautiful and bright young woman named Halley, who seems just as inexplicably to be in love with him…Whoa. A story of a group of enablers? Rock-n-roll lifestyle commentary? How sixties conservatism nearly ruined the world? Or just a sweet and sharp little film about what happens when your favorite unknown band is so damn great, you want the whole world to know it?

The rest of the film is an ardent, enjoyable rollercoaster ride, making us question the cost of not simply seeking out fame and fortune, but what happens when you are arguable once just this close to it, and it breezily passes you by?

There is a fine line between sanity and greatness in rock-n-roll, and I suppose that Bobby Liebling is living proof. I could have used more of the band’s music throughout, but the two filmmakers have some very obvious talent and chops. If nothing else, in the case of both Bobby and his true-blue buddy Pellet, the film is a gigantic testament to how music you truly love can really change your damn life.