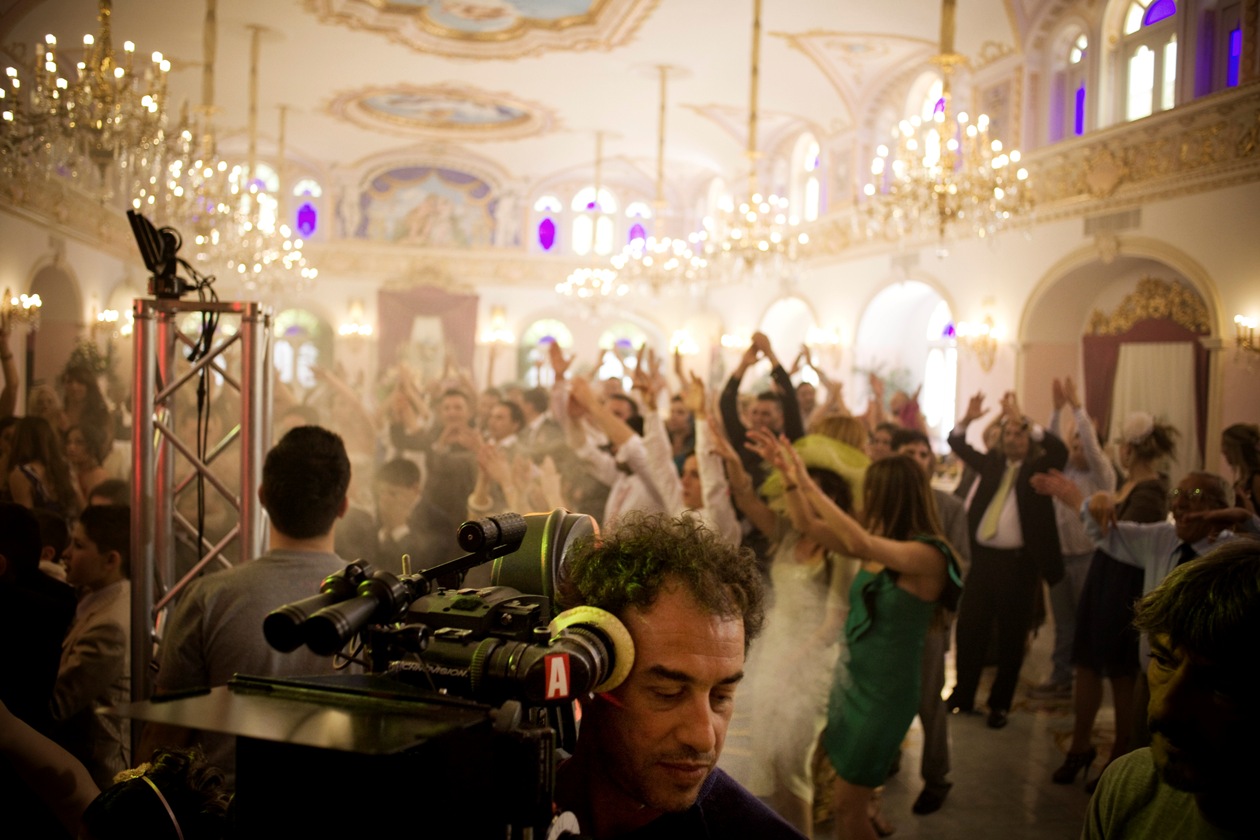 Garnering the illustrious Grand Prix at Cannes this year, Reality is an Italian film that is much more American in nature than we would want to believe possible.  Following up his gritty, grimy crime drama Gomorrah,  director Matteo Garrone is a master at keeping it real while telling a profound story about humanity in its most vulnerable state.(It helps that Garrone has a natural talent for finding brilliant non-actors. His lead actor is actually a prisoner who had to get permission to come to set and film.)

Shot in the city of Naples, Reality opens taking us right into a city that is grimy and filled with the sweat and dirt of every day people hustling and struggling. Crammed into tiny apartments together, with extended families living several to a room, you can smell the city of Naples from the beautiful opening.  His story centers around Luciano (an amazing Aniello Arena), a local fishmonger who is busy unloading robotic pasta-makers for extra cash with his wife, and trying to make a decent living for the entire family.  Apparently, the reality show Big Brother is somewhat of a major obsession in Italy in its own incarnation there, and at a friend’s wedding, the dorky hipster “Enzo” from the cast makes a paid appearance, wishing the bride and groom congrats. As a gag, Luciano dresses a woman and schticks around for a few moments with Enzo, garnering a cherished photo with Enzo for his daughter. When sweetly bull-dozed by cellphone by the same daughter, as well as his amused wife, to come to the mall for an “audition” for Big Brother, Luciano at first refuses, not really caring a bit. But then, to make everyone happy and shut them up, he decides to go. What follows is a long and winding trip into the psyche of someone who trades his life for a profound, inexplicable fantasy version, and it is completely mesmerizing to watch.

Garrone manages, somehow, to exert a glaring and tender touch, and Arena’s performance is so complete, so, well, both adorable and devastating, it is hard not to follow him down this path with both awe and an ashamed “I get it!” Because who among us living in the US, with extra time on their hands, has not at least once in a while fallen prey to the the thoughts of what others more powerful, beautiful, wealthier or more “fabulous” in general are doing with their lives? I don’t know if it makes one feel to better to know than even in Europe they are as bad as we are in terms of projecting themselves into alternate versions of their own lives, or much, much worse. The point is, Garrone is digging deeper than our obsession with reality TV. He is not skewering us, judging us, or gleefully unveiling something vile- Garrone is simply and effectively recreating his own version of classic Italian neo-realism in Reality, and is exciting to witness this evolution of an artist. The film open in the US on March 15th. We were lucky enough to sit down with the director last week, the once-painter who is now taking the helm as a new Italian, cinematic wonder…

VIMOOZ: Can you tell us what inspired the script? How did it develop, exactly?

Matteo Garrone: From a true story! It happened to the brother of my wife. My wife is from Naples, and she comes from a very big family. Her brother was a guy, that, every time there was a party, he was always making fun, the life of the party; everyone would always say to him, “You are perfect to go on television…” He asked me if I could help to film an audition for him. At that time. My studio was where they were doing the big casting for Big Brother.   So I said “sure.” What I didn’t know that it was the beginning of at tragedy! (laughs) Enzo, in the film, is me, in a way. We had to invent him, a character to give him the chance to make an audition.  I went through several treatments for the idea of the film, and soon asked him to look at them. We then decided together to do it.

VIMOOZ: How did it make him feel? Did he mind, at first, that you were basing the story on him?

Matteo Garrone: He followed me during the shooting, and talked a lot with the actor  (playing Luciano) and we had a happy ending, because we gave him money to re-buy his fish shop!

VIMOOZ: He actually had a fish shop in real life in Naples?

MG: Yeah. He had sold it. We invented some things, but the parts that we invented  are the more normal things. For instance, when the brother makes the crank phone call, pretending to be the Big Brother producer, we incented. The cricket , though, which seems more surreal, really happened! His fish shop is now going well. The real story has a happy ending. The movie, well…(laughs again)

VIMOOZ: Did you have the cinematic temptation to show Luciano losing his mind stylistically? To show his heightened metal reality visually?

MG: No, because in that moment, I think the audience could better understand the situation, from the point of view of the wife. So, we wanted to switch perceptions, otherwise, his mental state would have just become, after a while, repetitive. So we switched points of view, to the wife, and the parents, and the family. And in this story, they have a big complicity, because they pushed him to audition. That also happened in real life, but maybe not so aggressively. That’s why I think it’s a movie about illusion, but also, about capitalism. Because, you know, you never are satisfied with what you have, always grappling with the desire to have something else making you happy. I always said Luciano is not so far from myself. I get very weak from the seduction of our society, you know, and it’s very easy sometimes to lose your way, your identity…. Because, another important aspect of the movie is that Luciano builds a new character for himself, like in a Pirandello story.  That’s the beginning of the tragedy. Because he starts to act like a saint. But he’s not a saint. (Laughs some more) I think this aspect of the element of the story was what pushed me to tell this story, and I found this way to create a very close relationship with Luciano-he was close to me. We don’t want to put ourselves at the top, and judge. We all live in this world. That would not be fair. So we found a way to be close to the character, to tell the story with humanity.

VIMOOZ:  Is it a goal of yours to bring the societal problems so present in Italy, and which, say, Americans are rarely even aware of, to the forefront of your films?

MG: When I work on my project, I try to do my best. In this case, I can say that my references are related to the greatest Italian directors-De Sica, De Filippo, the early movies of Fellini, Visconti- there are so many… My influences come from them, but then I try to find my own way. It would be suicide to try and be a Fellini! (laughs) When you make a movie, you hope it can reach the largest number of audiences. I try to find my personal way.

Reality opens Friday, March 15th. See it in NYC HERE at the Angelika this weekend! Don’t miss it