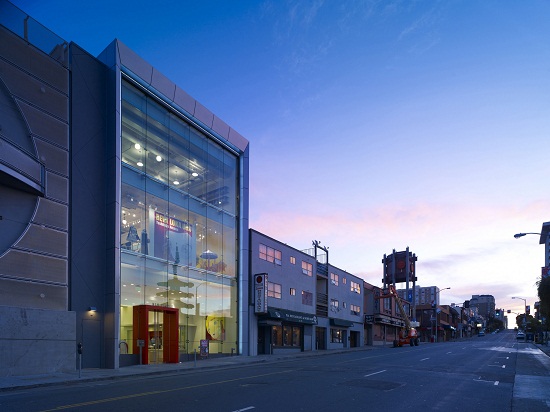 The San Francisco Film Society today announced the 13 finalists for the 2013 SFFS Documentary Film Fund awards totaling $100,000, which support feature-length documentaries in postproduction. The SFFS Documentary Film Fund was created to support singular nonfiction film work that is distinguished by compelling stories, intriguing characters and an innovative visual approach. Finalists were selected from more than 200 applications, and winners will be announced in late July.

Previous DFF winners include Shaul Schwarz’s Narco Cultura, which premiered at this year’s Sundance Film Festival; Joe Brewster and Michèle Stephenson’s American Promise, which also premiered at Sundance and won the festival’s Special Jury Prize in the documentary category; and Zachary Heinzerling’s Cutie and the Boxer, which won Sundance’s Directing Award for documentary, has played at film festivals worldwide and will be distributed theatrically by Radius-TWC.

2013 DOCUMENTARY FILM FUND FINALISTS
Above All Else — John Fiege, director/producer/cinematographer
Above All Else is the remarkable story of how one man’s struggle to protect his family from the Keystone XL pipeline transformed the fight against climate change in America. For more information visit aboveallelsefilm.com.

Art and Craft — Jennifer Grausman, codirector/coproducer and Sam Cullman, codirector/coproducer/cinematographer
Examining the curious story of a prolific art forger who isn’t in it for the money—but chooses instead to donate his work to museums—Art and Craft uncovers one of the most intriguing cases of deception in art history. Filmed at the moment his ruse is exposed, this story of obsession opens an unlikely window onto questions of mental health, art and philanthropy in the 21st century.

The Babushkas of Chernobyl — Anne Bogart and Holly Morris, co-director/producers
As Fukushima smolders, and the world grapples with a dangerous energy era, an unlikely human story emerges from Chernobyl to inform the debate. The Babushkas of Chernobyl is the story of an extraordinary group of women who live in Chernobyl’s post-nuclear disaster “Dead Zone.” For more than 25 years they have survived—and even, oddly, thrived—on some of the most contaminated land on earth. For more information visit thebabushkasofchernobyl.com.

Evolution of a Criminal — Darius Clark Monroe, director
Ten years after robbing a Bank of America, filmmaker Darius Monroe returns home to examine how his actions affected the lives of family, friends and victims. For more information visit facebook.com/evolutionofacriminal.

Freedom Fighters — Jamie Meltzer, director
There’s a new detective agency in Dallas, Texas, started by a group of exonerated men who have all spent decades in prison for crimes they didn’t commit. They call themselves the Freedom Fighters, and they’ve recently started working their first cases. For more information visit freedomfightersfilm.com.

Homestretch — Anne De Mare and Kristen Kelly, co-director/producers
Four homeless teenagers brave Chicago winters, the pressures of high school, and life alone on the streets to build a brighter future. Against all odds, these kids defy stereotypes as they learn to reach out for help and create new, surprising definitions of home.

One in a Billion — Geeta Patel, codirector/producer and Ravi V. Patel, codirector
When Ravi Patel breaks up with his white girlfriend and finds himself almost 30 and still single, he decides to give the traditional Indian matchmaking system a try. His entire family starts a search for his future wife and sends him on a whirlwind of dates around the country in hopes that he’ll find “the one.”

Radical Love — Hillevi Loven, director
Radical Love follows the journey of Cole, a transgender Christian teen growing up in rural North Carolina. Upon graduating from high school, he finds love and a sense of belonging with Ashley, a Christian woman. Together, they struggle to gain acceptance in a conservative Bible belt community that is grappling with the changing values of today’s Christian youth.

Redemption — Amir Soltani and Chihiro Wimbush, co-director/producers
As with the poor living in the urban slums of India, Egypt and Brazil, a surprising number of Americans make their living off of a vast river of trash. These are America’s untouchables. Through the lives of four recyclers, we are introduced to the art, science, economics and politics of recycling: what it offers, how it touches the poor and why it matters to all of us. For more information visit redemptiondoc.com.

Rich Hill — Tracy Tragos and Andrew Droz Palermo, co-director/producers
Rich Hill chronicles the turbulent lives of children living in a dying Midwestern town, witnessing their struggles up close as they yearn to find self worth and imagine a future beyond poverty. For more information visit richhillfilm.com.

Street Fighting Man — Andrew James, director/cinematographer
In a new America where the promise of education, safety and shelter are in jeopardy, three Detroit men fight to build something lasting for themselves and future generations in a city that is abandoning its citizens. As we witness each man’s fight to claim his piece of the American Dream, Street Fighting Man reveals that no one can do it alone. For more information visit streetfightingmanthemovie.com.

Tomorrow We Disappear — Jimmy Goldblum and Adam Weber, co-director/producers
When their homes are illegally sold to real estate developers, the magicians, acrobats and puppeteers of Delhi’s Kathputli Colony must unite—or splinter apart forever.