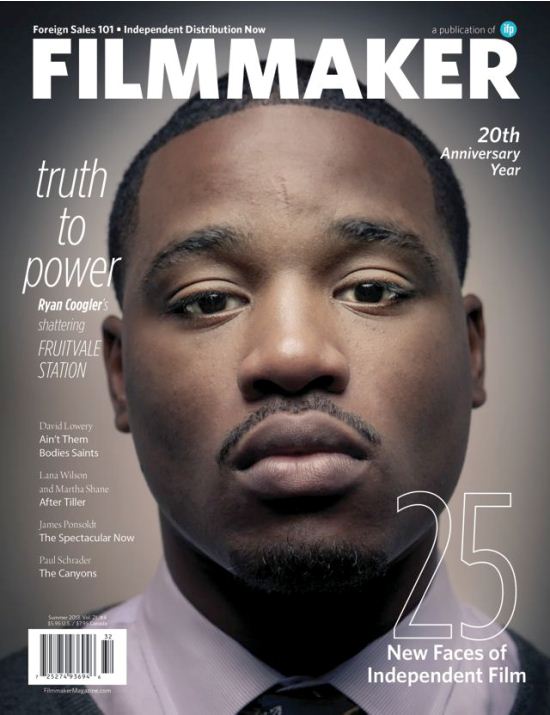 Filmmaker Magazine released the 16th edition of its annual “25 New Faces of Independent film” – its bet on the individuals who will be shaping the independent film world of the future. The Summer 2013 issue features on its cover Fruitvale Station director Ryan Coogler, who himself was selected for the “25 New Faces” series just one year ago.

“The 2013 ’25 New Faces’ series finds young filmmakers fascinated by an incredible diversity of global stories,” said Filmmaker Editor-in-Chief Scott Macaulay. “The U.S.-Mexico border, Iceland, villages in Senegal and Malawi, a Lakota Native American reservation, economically-battered Cyprus and the frontier American West are just a few of the places these young filmmakers have ventured in search for new tales and characters.”

Breakthroughs appearing on the list over the past 16 years include: Ryan Coogler, (Fruitvale Station) Lena Dunham (Girls, Tiny Furniture), Derek Cianfrance (The Place Beyond the Pines), Craig Brewer (Hustle & Flow), Ryan Fleck and Anna Boden (Half Nelson), Barry Jenkins (Medicine for Melancholy), Miranda July (Me and You and Everyone We Know), Joshua Safdie (Daddy Longlegs) and Peter Sollett (Raising Victor Vargas). Notable actors include several high profilers in the early days of their careers such as Ryan Gosling (The Believer), Ellen Page (Hard Candy), Peter Sarsgaard (Another Day in Paradise) and Hilary Swank (Boys Don’t Cry).

Filmmaker’s 25 New Faces of Independent Film of 2013 are:

Scott Blake’s 25-minute, masterful and mysterious short Surveyor, a 19th-century-set existentialist Western, has flown beneath the industry radar, playing the Tacoma Film Festival and then appearing online at Vimeo. He’s currently at work on a thriller set in the world of private security firms.

Emily Carmichael. Among the many short works of animator and filmmaker Emily Carmichael are the web series The Adventures of Ledo and Ix and her recent, acclaimed short RPG OKC, a lo-fi love affair captured as a sidescrolling arcade game.

Josephine Decker. Director, actress and performance artist Josephine Decker has had a varied career that includes startling Marina Abramovic at MoMA and premiering the unclassifiable short feature Butter on the Latch — about two women whose friendship dissolves at a Balkan folk music camp — at the 2013 Maryland Film Festival.

Mohammed Gorejestani. Bay Area-based, Tehran-born Mohammed Gorejestani directed for ITVS Refuge, a chillingly imagined tale of an Iranian cyber-attack on the U.S. — and the U.S. government’s response. He’s also a branded content director and software developer with a 1991-set feature about New Economy have-nots, Somehow These Days Will Be Missed, in the works.

Daniel Hart. Dallas-based composer Daniel Hart has created one of the best scores you’ll hear all year for fellow Texas resident David Lowery’s Ain’t Them Bodies Saints. And in addition to his solo work, Hart has played with bands like The Polyphonic Spree and Broken Social Scene and has scored several other films due for premiere next year.

Eliza Hittman. New York-based Eliza Hittman was one of Sundance 2013’s most exciting discoveries. Her first feature, It Felt Like Love, is a bold, honest and formally rigorous tale of teenage sexuality set in the seaside neighborhoods of south Brooklyn.

Boyd Holbrook. Currently filming a lead role in former “25 New Face” Sara Colangelo’s debut feature, Little Accidents, Boyd Holbrook appeared on screen this year in the Sundance picture Very Good Girls and Steven Soderbergh’s Behind the Candelabra, co-stars in the next Terrence Malick film, is directing a short based on a Sam Shepard story and is at work developing The Vacancy of Your Heart, his directorial debut.

Lou Howe. AFI grad Lou Howe was nominated for a Student Academy Award for his short film My First Claire, and he is in post on his feature debut, Gabriel, a Rory Culkin-starring drama that is currently part of the IFP Narrative Lab.

Jason Osder. Jason Osder’s searing look at the Philadelphia Police Department’s 1985 attack on the black separatist group MOVE, Let the Fire Burn, was a documentary discovery at this year’s Tribeca Film Festival. The D.C.-based George Washington University professor is currently at work on his follow-up, another true tale of political killing set in 1985.

Andrew Droz Palermo. Columbia, Mo.-based cinematographer and now director Andrew Droz Palermo has a number of releases set for the next year, including, as d.p., Adam Wingard’s horror picture, You’re Next, for Lionsgate, and Hannah Fidell’s A Teacher. He’s also directing with Tracy Droz Tragos Rich Hill, a documentary portrait of three boys in the Missouri town.

Iva Radivojevic. After having shot and directed numerous short, travel-based essay films for her website Iva Asks, New York-based director, cinematographer and editor Iva Radivojevic is in post on her debut feature, Evaporating Borders. Executive produced by Laura Poitras, it’s a visual essay about political refugees and asylum seekers in Cyprus, shot in the wake of its banking sector collapse.

directed his own debut, The Men of Dodge City, and, with Weintraub, launched the online site Simple Machine, a distributor start-up he describes as “the Airbnb of cinema.”

Rodrigo Reyes. With his experimental feature Memories of the Future and his recent documentary about the U.S.-Mexico border, Purgatorio, the latter of which recently premiered at the Guadalajara and Los Angeles Film Festivals, L.A.-based Rodrigo Reyes is creating a new visual language that unites the personal with the political.

Leah Shore. With the SXSW-premiering short film Old Man, Leah Shore combined her own frenetic animation style with audio interviews of Charles Manson to create a dazzling, psychotropic romp through the latter half of the 20th century.

Jeremy Teicher. New York filmmaker Jeremy Teicher traveled to rural Senegal to make his first feature, Tall as the Baobab Tree. Shooting it himself and working with next to no budget and actors speaking in a rural dialect that had never been used in a narrative film, it is a smart, rhythmic and moving tale of two sisters trying to self-actualize in their small village. The film has played the London, Rotterdam, San Francisco and New York Human Rights Watch Film Festivals.

Michael Tyburski and Ben Nabors. The production team of Michael Tyburski and Ben Nabors won the 2013 SXSW Grand Jury Documentary prize with William and the Windmill, which Nabors directed and Tyburski shot. The film follows William Kamkwamba as he travels the international circuit following his building of a windmill for his Malawi village. The two also co-wrote Tyburski’s prize-winning Sundance short, Palimpsest, an eerie, quasi-romantic narrative about an urban sonic feng shui specialist.

Lauren Wolkstein. With her short film Social Butterfly, which premiered at the Sundance Film Festival, New York-based Lauren Wolkstein turned the tale of a female American grifter’s infiltration into a French teenage house party into a surprisingly moving lesbian coming-of-age story. It’s just one of several striking shorts by Wolkstein, including The Strange Ones, which she co-directed with Christopher Radcliffe.

Chloé Zhao. Beijing-born, New York-based writer/director Chloé Zhao has been traveling back and forth to the Lakota Pine Ridge reservation in North Dakota in preparation for her debut feature, Lee, about an insurgent teen working his way towards adulthood in an environment in which teen suicide is rampant. The winner of the NYU Christopher Columbus/Richard Vague Film Production Grant, the project has also been supported by IFP, Sundance, and Film Independent.