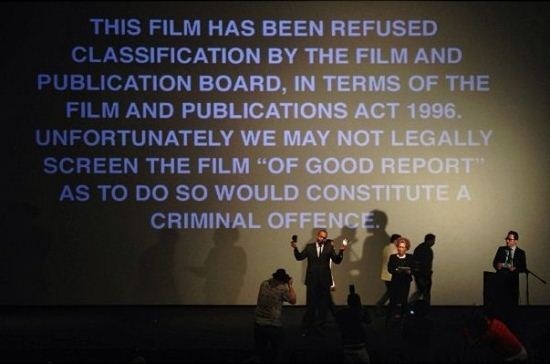 As we reported earlier, the World Premiere “OF GOOD REPORT” from South African director Jahmil XT Qubeka was scheduled to open the 34th Durban International Film Festival (DIFF), in Durban, South Africa, on Thursday, July 18, 2013. However, just before the festival was scheduled to begin, the filmmakers tweeted that the opening night film screening had to be canceled at the last minute after the South African government Film and Publication Board effectively censored the film. Instead an image was displayed on the screen that read, “This film has been refused classification by the Film and Publication Board, in terms of the Film and Publications Act of 1996. Unfortunately we may not legally screen the film, Of Good Report, as doing so would constitute a criminal offense.”

This didn’t go over too well with the filmmakers, who tweeted

@diffest opening film @ofgoodreportogr has been cancelled by the South African Film and Publications board. Full press release to follow.

“Unfortunately, the film and publication board has refused to allow the release of OF GOOD REPORT. According to their communication to the festival, the film contains a scene, which constitutes child pornography, and we are unable to legally show the film. I am very sorry about this,” said Durban International Film Festival manager Peter Machen.

“This is unconstitutional and we will fight it! On Mandela’s birthday we’ve returned to the dark days of apartheid censorship” – Producer

I’ve seen #OfGoodReport. There was nothing that hasn’t been shown before. Can’t believe it was censored for child pornography @DIFFest

“This is unconstitutional and we will fight it! On Mandela’s birthday we’ve returned to the dark days of apartheid censorship” – Producer

OF GOOD REPORT is described as “a passionate homage to classic film noir”, tells the somber tale of a small-town high-school teacher with a penchant for young girls.”

The trouble for Parker Sithole (Mothusi Magano) begins when he accepts an invitation to a drinking session at the local tavern. Here, he meets the undeniably gorgeous Nolitha Ngubane (Petronella Tshuma). Captivated by her beauty, Parker experiences an ecstasy he’s never known before and truly feels like a man reborn. From this mutual attraction, an illicit affair ensues. However, there ’s just one problem: the beautiful Nolitha is one of Parker’s pupils and just sixteen years old. Parker quickly spirals into a deep obsession that ultimately turns to a tragedy.

Six months later, the sociopathic Parker has moved on from his previous job. Trudging along the barren landscape, he stumbles upon an opportunity for a fresh start. According to a caption on an old strewn newspaper, there is a shortage of teachers in Zimbabwe. A qualified educator like him shouldn’t struggle to find a post; after all, he does come ‘of good report’.

In Qubeka’s words, Of Good Report, “is a serial killer origins story about how a social misfit turns into an inadequate man hell-bent on satisfying his shameful lust. It is Little Red Riding Hood, told from the wolf’s perspective.”

DIFF manager, Peter Machen said the University of KwaZulu-Natal, as the organizing body of the Durban International Film Festival would appeal and he hoped it could still be screened before the festival ends on July 28.