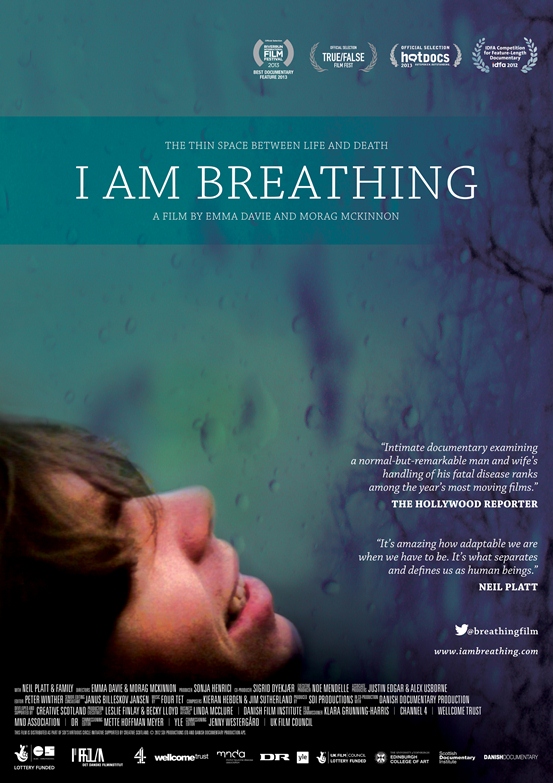 The documentary “I AM BREATHING” which played at many prestigious international film festivals will make its U.S. theatrical premiere in New York Sept. 6-12 at IFC Center and in Los Angeles Sept. 13-19 at Laemmle Music Hall with additional national screenings to follow. In I AM BREATHING, filmmakers Emma Davie and Morag McKinnon craft a life-affirming portrait of the last months of Neil Platt, a 34-year-old architect and father from England diagnosed with Amyotrophic Lateral Sclerosis (ALS) or Lou Gehrig’s Disease also known as Motor Neuron Disease (MND) in the UK.

I AM BREATHING is a film about a man, when faced with the unimaginable, shares his own story in what he called, “a tale of fun and laughs with a smattering of upset and devastation.” Within a year, Neil Platt goes from being a healthy 30-something British bloke, with a great sense of humor, to becoming completely paralyzed from the neck down, due to the devastating illness he has inherited, ALS. As his body gets weaker, his perspective on life changes. His humor remains, but a new wisdom emerges:

“It’s amazing how adaptable we are when we have to be. It’s what separates us and defines us as human beings.”

Knowing he only has a few months left to live, and while he still has the ability to speak, Neil puts together a letter and memory box for his baby son Oscar and communicates his experience and thoughts about life in a blog (The Plattitude) – and in this film, which he was determined to make. The directness of his communication mingles with images of the sensory details of a life well lived, and makes us revalue the ordinary.

His blog posts form the film’s narration as he tells his own story through memories and impressions of his life – the sheer joy of falling in love, of partying with his mates, of fast motorbike rides. Through his determination to share his final journey, Neil makes us ask questions about our own lives.

Neil Platt was diagnosed with ALS in February 2008 by Professor Chris Shaw. Sadly, Neil lost his own personal battle with the disease a year later, but through his family, friends and this documentary he wanted to continue to raise awareness around this devastating illness. ALS/MND has been described as the last truly incurable disease of the modern day. ALS/MND is a rapidly progressive and fatal disease. It can affect any adult at any time and attacks the motor neurons that send messages from the brain to the muscles, leaving people unable to walk, talk or feed themselves. Ten days after Neil died, Shaw made a very significant breakthrough in MND research by identifying one of the genes that causes it, and more discoveries are being made every day. Neil Platt was among the small proportion (5-10%) of people with MND who have a family history of the disease, caused by genetic mistakes that can be passed from one generation to the next.

Since Neil’s death, his widow Louise Oswald continues to fulfill her final promise to Neil by continuing to raise awareness of ALS/MND. Louise is working closely with the filmmaking team on the outreach campaign, providing interviews for national press and making many personal appearances to speak at screenings.

Since 2009 Louise has been writing a book about her experience of caring for her family in the eighteen months between the birth of her son and the death of her husband. Neil’s words join her in the latter part of the book as she adds comment to each entry of The Plattitude. Louise now lives in a small village near St. Andrews in Scotland with Oscar and her new husband Robin. Oscar is now in his first year of school.

According to the ALS Association, every day, an average of 15 people are newly diagnosed with ALS — more than 5,600 people per year. As many as 30,000 Americans may currently be affected by ALS. Annually, ALS is responsible for two deaths per 100,000 people. More information at:  www.alsa.org/news/media/