WHY DON’T YOU PLAY IN HELL? by Sono Sion Among 15 Films from 70th Venice International Film Festival to Screen Online 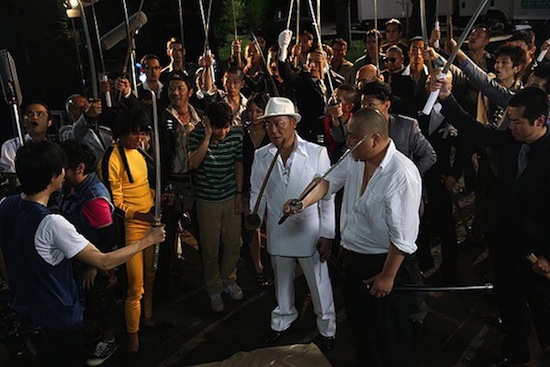 JIGOKU DE NAZE WARUI (WHY DON’T YOU PLAY IN HELL?) by Sono Sion

The films at the Web Theatre

WOLFSKINDER (WOLFSCHILDREN) by Rick Ostermann (Germany, 91’)
Germany, World War II. Several orphans from Eastern Prussia organize their survival, hiding from the Soviet occupiers, living in abandoned sites. One of thesewolf children is Hans, who is searching for his lost little brother. Rick Ostermann is a German director who made his debut in 2009 with the short film Still,but has brought his first feature-length film here to the 70th Venice International Film Festival. He has been an assistant director for many years in both television and film productions.

JIGOKU DE NAZE WARUI (WHY DON’T YOU PLAY IN HELL?) by Sono Sion (Japan, 126’)
Muto is a gangster who wants to make his daughter Mitsuko’s dream come true: to act in a movie. Ikegami is Muto’s rival and enemy, but he falls in love with Mitsuko thereby triggering a series of violent and bizarre situations for an action movie reminiscent of Kill Bill, written by the director when he was barely fifteen years old. Sono Sion is a Japanese director, poet and composer. He has made important films and in 2010 came to the 67th Venice International Film Festival for the first time with Tsumetai nettaigyo (Cold Fish). The following year he returned to present Himizu, which won the “Marcello Mastroianni” prize, awarded to Fumi Nikaidô and Shôta Sometani.

ALGUNAS CHICAS by Santiago Palavecino (Argentina, 100’)
With her marriage on the rocks, Celina goes to visit an old friend. Her attention immediately shifts to Paula, the friend’s adopted daughter, who apparently attempted suicide and nothing has been heard from her since… A mystery, suspended between reality and nightmare. SantiagoPalavecino, born in 1974, made several short films before shooting his first feature-length film, Otra vuelta, in 2002, which was presented in the Atelier section of the Cannes Film Festival. In 2011 he made La vida nueva. Algunas Chicas is his fourth feature-length film.

PICCOLA PATRIA by Alessandro Rossetto (Italy, 100’)
In the ambitious and petty atmosphere of north-eastern Italy, young Luisa blackmails Menon on sexual grounds. The situation is further complicated by the friendship between Menon and Luisa’s father, forever ruining the relationship between the protagonists. Alessandro Rossetto was born in Padua, and studied documentary filmmaking in Paris. He is known for his film Chiusura dedicated to the people that drift around his mother’s hairdresser’s shop and The Colony.

JE M’APPELLE HMMM… by Agnès B. (France, 120’)
Céline is eleven years old and has run away from an incestuous father. In her wanderings she meets Peter, 45 years old, a man deeply hurt by the loss of his wife and daughter. He will give himself completely to Céline, restoring the girl’s will to live and her carefree childhood. Agnes B. is a French fashion designer, artist and director. In 2012 she was one of the producers of Spring Breakersin competition at the 69th Venice International Film Festival. Her debut film was the short film Une sorte de journal video. In Venice this year she is presenting her first feature-length film.

MEDEAS by Andrea Pallaoro (USA, Italy, 98’)
The film is a lyrical exploration of a particular family situation and the human relationships within it. Devoid of any moral judgment, the eye of the director studies the boundaries of human behaviour and explores how far an inpidual can go, driven by love and the spirit of survival. AndreaPallaoro was born in Trento but at the age of 17 moved to California to study filmmaking. His short film Wunderkammer was presented at the Sundance Film Festival. This year he brings his first feature-length film to the Orizzonti section.

RUIN by Amiel Courtin-Wilson, Michael Cody (Australia, 90’)
Phirun is 19 years old and lives in Phnom Penh. One day he is accused of theft and involuntarily injures his employer. Phirun escapes and during his flight, he meets Sovanna; a powerful bond grows between the two of them, and develops into love. Amiel Courtin-Wilson is Australian, and made his debut at the Sundance Film Festival in 2000 with Chasing Buddha; since then he has made many films, screened at the major film festivals. In 2011 he directed Hail, presented at the 68th Venice International Film Festival in the Orizzonti section. Michael Cody, producer, director and screenwriter, has often collaborated with Courtin-Wilson and now they are back together with Ruin.

LA VIDA DESPUÉS by David Pablos (Mexico, 90’)
Two brothers, Samuel and Rodrigo, live with their mother in a suburban town. One day the mother, who has mental health problems, disappears leaving nothing behind but a note. David Pablos is a young Mexican filmmaker, born in 1982. His first short film, El mundo al atardecer, was made in 2007. La canción de los niños muertos (2008) was his second short film; he presented his first feature-length film Una frontera, todas las fronteras (2010) at the Berlinale Talent Campus before coming to Venice with his second film, La vida despues, for the 70th Venice International Film Festival.

EASTERN BOYS by Robin Campillo (France, 128’)
Gare du Nord, Paris. Young men from Eastern Europe spend all day at the station where it appears that they engage in prostitution. A fifty-year old man, Muller, sets his eyes on one of them, Marek, and invites him to his home the next day. A trap has been set for him there. Robin Campillo is a French filmmaker who has collaborated for years, first as an editor and then as a co-author for the screenplay, with director Laurent Cantet. He made his debut as a director in 2005 with Les revenants and he now brings his second feature-length film to the Venice Film Festival.

BAUYR (LITTLE BROTHER) by Serik Aprymov (Kazakhstan, 95’)
Yerken is nine years old and lives alone in a remote village in the mountains. When his older brother returns after a long absence, the young boy’s heart leaps with joy. But it doesn’t last long, his older brother has become a cold and heartless person… Serik Aprymov was born in 1960 in Kazakhstan and studied film at the Moscow Film School (VGIK). Along with other young directors from his country, he became part of the “new wave” of Kazakh cinema. At the Locarno Film Festival in 2004, he presented Okhotnik (The Hunter), in which a young boy suffers the contrast between the traditions of his people now on the decline and the progress of an increasingly urbanized new society.

LA PRIMA NEVE by Andrea Segre (Italy, 104’)
Michele is eleven years old and lives in a small town in the mountains of Trento, with his mother and his paternal grandfather Pietro; his father has recently died. The boy’s pain meets that of Dani, a boy from Togo, who is a total ‘stranger’ to that place covered in snow which he has never seen before in his life.Andrea Segre, born in 1976, is a director who has made many prestigious works. He has participated several times in the Venice Film Festival, in particular in the 68th Festival with Io son Li (2011) and in the 69th Festival with Mare Chiuso (2012), a Special Event.

MAHI VA GORBEH (FISH & CAT) by Shahram Mokri (Iran, 134’)
While camping in the Caspian region, some students end up sharing a cabin with three cooks. The latter are looking for meat for their restaurant, but the only meat there is on the students themselves. This film is shot in a single long take based on a true story. Shahram Mokri is a young Iranian director, born in 1977. He studied filmmaking at Teheran’s Soureh College. He made his directorial debut in 2009 with Ashkan, angoshtar-e motebarek va dastan-haye digar (Ashkan, the Charmed Ring and Other Stories), a film in which two blind men plan a robbery with the help of Ashkan, who wants to kill himself.

YURI ESPOSITO by Alessio Fava (director) and Max Chicco (producer) (Italiy, 73’)
Yuri Esposito is a man whose slowness pervades every action in his life and comes to constitute its essence, but his perennial lethargy is challenged by a surprise paternity. Alessio Fava was born in 1976 in Turin where he studied at the Accademia Internazionale di Arti e Media before attending the Scuola d’Arte Cinematografica in Genoa. In 2012 he made his first short film Project Genesis, an ironic film set in the future in which, reversing the stereotypes of this genre, the machines give life to human beings, whom they use for their own personal enjoyment.

MEMPHIS byTim Sutton (director) and John Baker (producer) (USA, 84’)
Ezra Jack is a soul-blues singer looking for spiritual salvation. He lives in Memphis, a decadent city immersed in music. This is where Ezra hopes to bring his personal renaissance to term. Timothy Sutton is a filmmaker from Brooklyn. He made his directorial debut in 2012 with Pavilion, which follows a laconic adolescent as he travels from a peaceful lakefront town to his father’s home in the arid state of Arizona. A film that describes adolescence as a period of great creativity, while underlining the fragility that goes with it.

MARY IS HAPPY, MARY IS HAPPY by Nawapol Thamrongrattanarit (director) and Aditya Assarat (producer) (Thailand, 125’)
Mary is a student in her last year of high school. She will be graduating in a few months, and must address the changes in her life, love and friendships. In the meantime, strange things start to happen without any apparent reason. The girl tries to make sense of it all at a moment in which her life seems to be spiraling out of control. NawapolThamrongrattanarit is from Thailand but studied filmmaking in China. In 2002 he made his first feature-length film 36,and this year presents his second film at the 70th Venice International Film Festival, thanks to the first edition of Biennale College – Cinema.