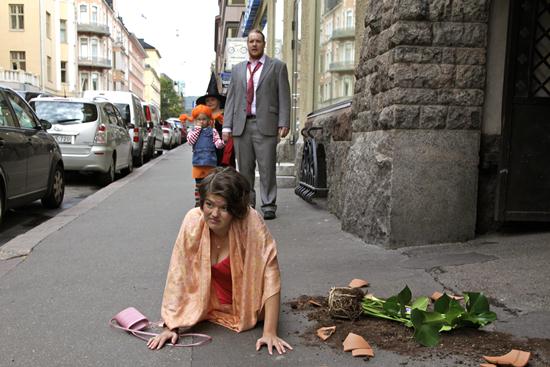 DO I HAVE TO TAKE CARE OF EVERYTHING

MANHATTAN SHORT announced the ten films to screen in the 16th Annual MANHATTAN SHORT Film Festival to take place in over 300 cinemas across six continents from Friday September 27 to Sunday October 6, 2013.

# 30 (8.53)
A talented young actress audtions for the role of Hamlet and not even Shakespeare could anticpate the result. Directed by Timothy Wilde (Australia)

DO I HAVE TO TAKE CARE OF EVERYTHING (6.35)
A comedy about a chaotic morning in a family with kids and a mother who is determined that it’s best to take care of everything herself. Directed by Selma Vilhunen (Finland)

FRIDAY (17.30)
A young man plots revenge after losing his mother in a terrorist bombing in London. Directed by Seb Edwards (England)

NO COMMENT (3.41)
A girl has two unexpected encounters with men in the Jardin du Luxembourg in Paris. Directed by Alexandra Naoum (France)

BLACK METAL (9:00)
The lead singer of a Black Metal band confronts the effects of his violent lyrics. Directed by Kat Candler (USA)

FACES FROM PLACES (9:00)
Portraits of Moscow, Pakistan, and Quebec as seen through the eyes of a traveling illustrator with a flair for adventure. Created By Bastien Dubois (France)

I AM A GREAT BIG BALL OF SADNESS (8:36)
At a swanky, rooftop party in New York City, three guests try to get past their cocktail smiles Pakistan, and Quebec as seen through the eyes of a traveling illustrator with a flair for adventure. From the short play written By Ken Urban (USA)

KIZMET DINER (9:00)
A singing waitress in a diner finds the song that opens the heart of a disinterested customer. Directed ByMark Nunnely (England)

PALE OF SETTLEMENT (17:58)
Based on a true events, The Pale of Settlement, tells the story of a 10 year old Jewish boy, Moische, who must escape forced conscription into the Russian Army during the Crimean War. Directed By Jacob Sillman (USA)