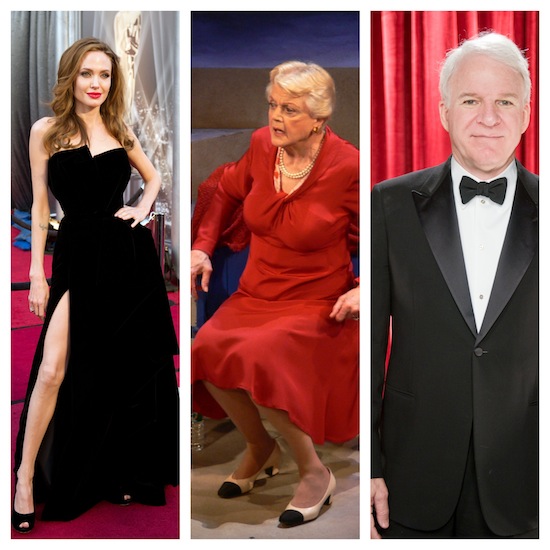 The Board of Governors of the Academy of Motion Picture Arts and Sciences will present Honorary Awards to Angela Lansbury, Steve Martin and Piero Tosi, and the Jean Hersholt Humanitarian Award to Angelina Jolie.  All four awards will be presented at the Academy’s 5th Annual Governors Awards on Saturday, November 16, at the Ray Dolby Ballroom at Hollywood & Highland Center.

“The Governors Awards pay tribute to individuals who’ve made indelible contributions in their respective fields,” said Academy President Cheryl Boone Isaacs.  “We couldn’t be more excited for this year’s honorees and look forward to bringing their peers and colleagues together to celebrate their extraordinary achievements.”

Lansbury has received three Academy Award® nominations for her supporting performances on film – the first in her 1944 feature debut in “Gaslight,” followed by “The Picture of Dorian Gray” (1945) and “The Manchurian Candidate” (1962).  Her numerous other credits include “The Long, Hot Summer,” “Blue Hawaii,” “The World of Henry Orient,” “Bedknobs and Broomsticks,” “Death on the Nile” and “Mr. Popper’s Penguins,” as well as voice work for the first animated feature to receive a Best Picture nomination, “Beauty and the Beast.”

Martin, who got his start in television, is a versatile actor, writer, comedian and musician who began to display the breadth of his big-screen talent as the screenwriter and star of the 1977 Oscar®-nominated short film “The Absent-Minded Waiter.”  He wrote and starred in “The Jerk,” “Dead Men Don’t Wear Plaid,” “Three Amigos,” “Roxanne,” “L.A. Story,” “The Pink Panther” series and “Shopgirl,” which he adapted from his critically acclaimed book of the same name.  His other acting credits include “All of Me,” “Parenthood,” “Father of the Bride” and “It’s Complicated.”  He also is a three-time host of the Oscars®, most recently in 2010 with Alec Baldwin.

Tosi rose to prominence through his collaborations with Italian director Luchino Visconti on such films as “White Nights” and “Rocco and His Brothers,” and continued to work with him on several other features, including the Costume Design nominees “The Leopard,” “Death in Venice” and “Ludwig.”  Tosi received two more nominations for his designs for “La Cage aux Folles” and “La Traviata.”  His other notable credits include “Yesterday, Today and Tomorrow,” a Foreign Language Film winner, and “Marriage Italian Style,” a Foreign Language Film nominee, both directed by Vittorio De Sica.

Jolie, who won an Oscar for her supporting performance in “Girl, Interrupted,” has been an impassioned advocate for humanitarian causes, traveling widely to promote organizations and social justice efforts such as the Prevent Sexual Violence Initiative.  Staking out a career at the nexus of entertainment and philanthropy, Jolie has worked for a number of global advocacy groups including the Council on Foreign Relations and the Office of the United Nations High Commissioner for Refugees (UNHCR), for which she was appointed Special Envoy of High Commissioner António Guterres in 2012 after twelve years of service.  Her dedication to these causes has also shaped her work in films that tackle global humanitarian issues including “A Mighty Heart” and her feature film directorial debut “In the Land of Blood and Honey.”

The Honorary Award, an Oscar statuette, is given “to honor extraordinary distinction in lifetime achievement, exceptional contributions to the state of motion picture arts and sciences, or for outstanding service to the Academy.”

The Jean Hersholt Humanitarian Award, also an Oscar statuette, is given “to an individual in the motion picture industry whose humanitarian efforts have brought credit to the industry.”