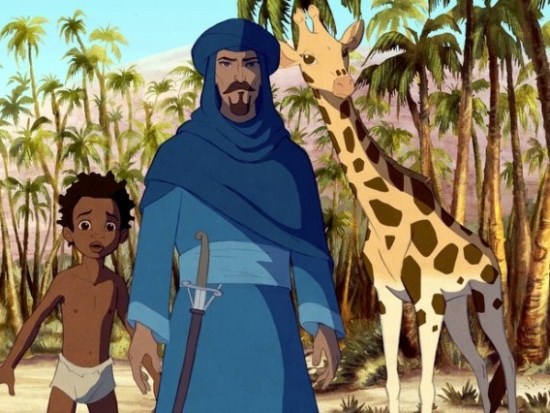 The first Philadelphia International Children’s Film Festival (PICFF), will run November 15 to 17, 2013 at the newly renovated PFS Theater at the Roxy, and will offer a variety of animated, live-action and experimental short and feature films from all around the world.  Opening night festival brings to Philadelphia the hand-animated film, ZARAFA, directed by Rémi Bezançon and Jean-Christophe Lie, based on the true story of the first giraffe to travel to France.  Closing the festival is THE ZIGZAG KID, directed by Vincent Bal, described as a whimsical and stylish detective caper.

ZARAFA –  Opening Night Film
Directed by Rémi Bezançon, Jean-Christophe Lie
France, 81 minutes
In French with English Subtitles
Recommended Ages: 7 to adult
Opening night of the First Inaugural Children’s Film Festival brings to Philadelphia this stirring and gorgeously hand-animated film, based on the true story of the first giraffe to travel to France. After freeing himself from slavers and fleeing across the moonlit savannah, young Maki meets Hassan, a nomad, and Zarafa, an orphaned baby giraffe. When the Pasha of Egypt orders the giraffe to be taken as a gift to the King of France, the three board a hot air balloon and embark on an adventure-filled ride over North African skies, through the bustling port of Marseilles before landing in Paris.  After the king accepts his gift with minimal enthusiasm, Maki becomes determined to get Zarafa back home to Africa.

PINOCCHIO
Directed by Enzo D’Alo
Italy, 83 minutes
In English
Recommend Ages: 5-10
Enzo D’Alo’s colorful telling of this classic tale hews closer to the spirit and plot of Carlo Collodi’s original story, with Pinocchio remaining for most of the picture a rambunctious little scamp, who goes from one strange adventure into another in an Alice in Wonderland-like ride that never pauses.  Though Geppetto, Cricket, and Blue Fairy point him on the right path, Pinocchio prefers to play hooky, and finds himself at the mercy of a host of outlandish characters. In the end, Pinocchio, in the belly of a giant shark, reunites with his papa and may finally have learned what it means to be good.

KIRIKOU AND THE MEN AND THE WOMEN
Directed by Michael Ocelot
France, 87 minutes
In French with English Subtitles
Recommended Ages: 7  to adult
In the third film in the Kirikou trilogy, director Michel Ocelot mixes fables and mythology and has our young hero saving his village from supernatural and human threats alike.  Kirikou does so with the eagerness and naiveté of a child, making him an incredibly endearing character.  Ocelot’s blend of Malian, Togolese, and French music and his stunning use of color create an engaging and enchanting film for the whole family.

WOLF CHILDREN
Directed by Mamoru Hosoda
Japan, 117 minutes
In Japanese with English Subtitles
Recommended Ages: 9 to adult
From acclaimed filmmaker Mamoru Hosoda, Wolf Children is about Hana, a young woman whose whirlwind romance takes an unexpected turn when she learns her boyfriend is part-wolf. Nonetheless, the two grow closer and soon add two half-wolf children to their family.  When the children’s father is suddenly taken from them, Hana must deal with the challenges that come when her begin growing fur and tearing up the furniture.  Brimming with Hosoda’s trademark visual splendor, Wolf Children is his most emotionally resonant film to date – a beautiful story about acceptance and growing up.

MEET THE SMALL POTATOES
Directed by John Selig
USA, 60 minutes
In English
Recommended Ages: 3-6
Fans of This is Spinal Tap will love this mockumentary about a band of singing potatoes.  The “Small Potatoes” have humble beginnings on an Idaho potato farm, but soon rocket to stardom in the music biz – but it isn’t long before the band must deal with diva mentalities and other perils of fame.  This faux rockumentary features interviews with fans, commentary form former managers, and musical interludes to complete the inside look at a rock band of singing spuds.

WELCOME TO THE SPACE SHOW
Directed by Koji Masunari
Japan, 136 minutes
In English
Recommended Ages: 7 to adult
It seems like a boring summer day in the Japanese countryside for Amane and her cousin Natsuki when they come across a stray dog in the woods.  They take the dog back to their cabin only to find that he is actually an alien scientist doing research on Earth. Soon, the children are whisked away to the dark side of the moon, where they encounter an interstellar melting pot of humorous aliens, spaceships, and a host of other surprises.

STARRY STARRY NIGHT
Directed by Tom Shu-yu Lin
Taiwan, 98 minutes
In Mandarin with English subtitles
Recommended Ages: 9 to adult
Starry Starry Night is the whimsical and emotionally resonant coming-of-age story of Mei.  To escape her parents’ bickering, Mei immerses herself in a fantasy world, populated by over-sized origami animals and shadowy beasts. Meanwhile, troubled newcomer Jay becomes an instant target for schoolmates’ taunting. Brought together by mutual loneliness, Mei and Jay sneak away to Mei’s grandfather’s cottage in the countryside. Based on the graphic novel by Taiwanese writer Jimmy Liao, Starry Starry Night is a charming portrayal of life-changing events that can happen when finding your place in the world.

THE DAY OF THE CROWS
Directed by Jean-Cristophe Dessaint
Canada/France, 95 minutes
French with English Subtitles
Recommended Ages: 7 to adult
Deep in the woods, Pumpkin, an ogre-like man, lives with his son and teaches him to live off the land, forbidding him from leaving the forest.  But when Pumpkin is injured, his son must leave the comfort of the woods and his spirit friends to venture into a nearby village for help.  There, he experiences the comfort of human companionship and discovers things about his family that he had never before known.  From the lushly animated forests to the bustling village, The Day of the Crows unfolds a story of courage, exploration and acceptance.

THE ZIG ZAG KID – Closing Night Film
Directed by Vincent Bal
Belgium, 90 minutes
In English, Dutch, and French with English Subtitles
Recommended Ages: 8 to adult
Closing Philadelphia Children’s Film Festival, The Zigzag Kid is a whimsical and stylish detective caper that received extraordinary reviews in Berlin and Toronto.  The son of a world-renowned police inspector, young Nono is well trained in the art of sleuthing.  When Nono comes face-to-face with Felix Glick, his father’s archenemy, a trip with his boring Uncle Shmuel turns into a rip-roaring, mystery-solving adventure reminiscent of The Pink Panther.