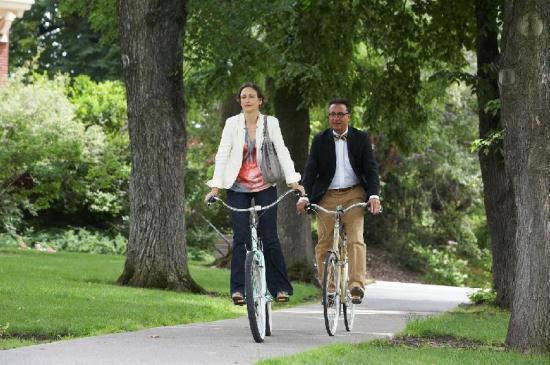 LABOR DAY – (DIRECTOR Jason Reitman, PRODUCERS Jason Blumenfeld, Helen Estabrook, Lianne Halfon, Jason Reitman, Russel Smith WRITER Jason Reitman CAST Josh Brolin, Kate Winslet, Gattlin Griffith) – Labor Day centers on 13-year-old Henry Wheeler (Griffith), who struggles to be the man of his house and care for his reclusive mother Adele (Winslet) while confronting all the pangs of adolescence. On a back-to-school shopping trip, Henry and his mother encounter Frank Chambers (Brolin), a man both intimidating and clearly in need of help, who convinces them to take him into their home and later is revealed to be an escaped convict. The events of this long Labor Day weekend will shape them for the rest of their lives. Courtesy of Paramount Pictures

AUGUST: OSAGE COUNTY – (DIRECTOR John Wells, PRODUCERS George Clooney, Grant Heslov, Steve Traxler, Harvey Weinstein WRITER Tracy Letts CAST Julia Roberts, Meryl Streep, Benedict Cumberbatch, Ewan McGregor, Abigail Breslin, Juliette Lewis, Sam Shepard, Chris Cooper) -August: Osage County tells the dark, hilarious and deeply touching story of the strong-willed women of the Weston family, whose lives have diverged until a family crisis brings them back to the Midwest house they grew up in, and to the dysfunctional woman who raised them. Tracy Letts’ Pulitzer Prize-winning play of the same name made its Broadway debut in December 2007 after premiering at Chicago’s legendary Steppenwolf Theatre earlier that year. It continued with a successful international run and was the winner of five Tony Awards in 2008, including Best Play.August: Osage County is directed by John Wells (The Company Men), who received the SDFF 25 Mayor’s Career Achievement

Award. Courtesy of The Weinstein Company

AT MIDDLETON – (DIRECTOR Adam Rodgers, PRODUCERS Andy Garcia, Glenn German, Sig Libowitz WRITERS Glenn German, Adam Rodgers CAST Vera Farmiga, Andy Garcia, Taissa Farmiga, Spencer Lofranco, Tom Skerritt, Peter Riegert) – The inaugural George Hickenlooper Award (2012) winner Andy Garcia returns to SDFF with his latest film directed by Adam Rodgers. Edith (Vera Farmiga) is a strong-willed, free-spirited and successful businesswoman who’s taking her hyper- achieving, 18 year-old daughter Audrey (Taissa Farmiga) on a tour of potential colleges. George (Garcia) is a buttoned-up heart surgeon accompanying his not very motivated son Conrad (Lofranco) (also 18), on a similar tour. Their paths cross at idyllic Middleton College, nestled in the picturesque Pacific Northwest. At first, all things point to this being the kids’ story… but as the parents’ well intentioned support backfires hilariously-so much so that they are booted from the very campus tour they traveled so far to attend – it quickly becomes clear that George and Edith are the heart of the film. Now banished together, these two time-pressed, responsible adults suddenly find themselves with a free day in the midst of a beautiful setting – and the hours they subsequently share change their lives as they play out a singular “college tour” all their own. Equal parts charming, romantic and heartfelt, At Middleton is about letting go and coming together – the story of two people who, through a remarkable, unexpected connection, are able to glimpse the potential that true romance can offer. As Edith and George eventually realize, in ways both comic and heartbreaking, their adventure proves to be “the greatest half-day” of their lives. Courtesy of Anchor Bay Films

AMERICAN MUSTANG – (DIRECTOR Monty Miranda PRODUCER Henry Ansbacher CAST Daryl Hannah, Alison Eastwood, Julia Putnam, Jim Neubert, Luke Neubert) – In an artful blend of exquisite nature documentary and character driven narrative, the majestic wild horses of the American West are revealed in stereoscopic 3D as never before. The wonder in a girl’s eye pulls us into a drama unfolding still on hundreds of millions of acres of public land. The battle lines have long been carved into very the landscape, and the players are deeply entrenched. Yet as the subtle choreography that has evolved over thousands of years begins again before our eyes, it is captivating. The intricate dance between a man and an wild horse presents lessons for us all, even the battle hardened special interest groups fighting over the place of the American Mustang.

THE ARMSTRONG LIE – (DIRECTOR Alex Gibney PRODUCERS Alex Gibney, Frank Marshall, Matthew Tolmach WRITER Alex Gibney CAST Lance Armstrong) – In 2009 Alex Gibney was hired to make a film about Lance Armstrong’s comeback to cycling. The project was shelved when the doping scandal erupted, and re-opened after Armstrong’s confession. The Armstrong Lie picks up in 2013 and presents a riveting, insider’s view of the unraveling of one of the most extraordinary stories in the history of sports. As Lance Armstrong himself says: “I didn’t live a lot of lies, but I lived one big one.”

GLORIA – (DIRECTOR Sebastia´n Lelio PRODUCERS Luis Collar, Juan de Dios Larrai´n, Pablo Larrai´n WRITERS Sebastia´n Lelio, Gonzalo Maza CAST Paulina Garci´a, Sergio Herna´ndez, Diego Fontecilla, Fabiola Zamora, Coca Guazzini) – Gloria is 58 years old and still feels young. Making a party out of her loneliness, she fills her nights seeking love in ballrooms for single adults. This fragile happiness changes the day she meets Rodolfo. Their intense passion, to which Gloria gives everything as she feels it may well be her last, leaves her dancing between hope and despair. Gloria will have to pull herself together and find a new strength to realize that, in the last act of her life, she could burn brighter than ever.

HANNA RANCH – (DIRECTOR Mitch Dickman PRODUCERS Karl Kister, Eric Schlosser) – Mitch Dickman’s documentary is an intimate portrait of three generations of a Colorado ranching family and their once prominent way of life. It focuses on “eco-cowboy” Kirk Hanna, who was featured in the book Fast Food Nation as an early adopter of Holistic Resource Management practices, fights to preserve his land in the face of urban encroachment, environmental concerns and family discord.

ONE CHANCE – (DIRECTOR David Frankel PRODUCERS Simon Cowell, Michael Menchel, Kris Thykier, Harvey Weinstein, Brad Weston WRITER Justin Zackham CAST Julie Walters, Colm Meaney, Mackenzie Crook, James Corden, Jemima Rooper, Alexandra Roach) – Most people only dream about becoming a famous superstar, but against all odds one man from Wales did just that. This is the story of his journey. One Chance is the remarkable and inspirational true story of Paul Potts, a shy, bullied shop assistant by day and an amateur opera singer by night. Paul became an instant YouTube phenomenon after being chosen by Simon Cowell for ‘Britain’s Got Talent.’ Wowing audiences worldwide with his phenomenal voice, Paul went on to win ‘Britain’s Got Talent’ and the hearts of millions.

PHILOMENA – (DIRECTOR Stephen Frears PRODUCERS Steve Coogan, Tracey Seaward, Gabrielle Tana WRITER Steve Coogan, Jeff Pope CAST Judi Dench, Steve Coogan) – Falling pregnant as a teenager in Ireland in 1952, Philomena was sent to the convent of Roscrea to be looked after as a “fallen woman.” When her baby was only a toddler, he was taken away by the nuns for adoption in America. Philomena spent the next fifty years searching for him but with no success. Then she met Martin Sixsmith, a world-weary political journalist who happened to be intrigued by her story. Together they set off to America on a journey that would not only reveal the extraordinary story of Philomena’s son, but also create an unexpectedly close bond between Philomena and Martin. The film is a compelling narrative of human love and loss that ultimately celebrates life.

TIM’S VERMEER – (DIRECTOR Teller PRODUCERS Penn Jillette, Farley Ziegler CAST Tim Jenison, Penn Jillette, Colin Blakemore, David Hockney, Martin Mull, Philip Steadman) – Tim Jenison, a Texas based inventor, attempts to solve one of the greatest mysteries in all art: How did 17th century Dutch Master Johannes Vermeer (“Girl with a Pearl Earring”) manage to paint so photo-realistically-150 years before the invention of photography? The epic research project Jenison embarks on to test his theory is as extraordinary as what he discovers. Spanning a decade, Jenison’s adventure takes him to Delft, Holland, where Vermeer painted his masterpieces; on a pilgrimage to the North coast of Yorkshire to meet artist David Hockney; and eventually even to Buckingham Palace, to see the Queen’s Vermeer.