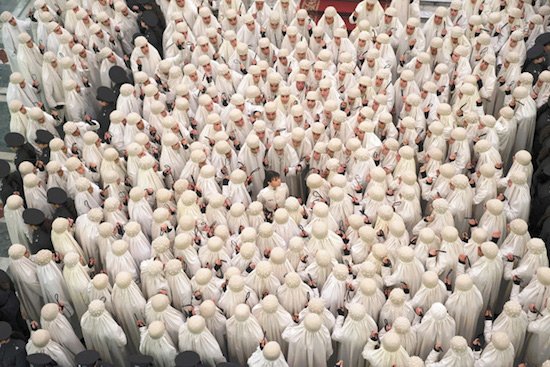 ANOTHER YEAR – Oxana Bychkova
He’s an unemployed guy who earns some money by giving lifts to strangers. She’s a graphic designer who just got her first job. The film tracks their relationship – and the way it gradually melts away – throughout a year. A subtle, moving portrait of an immature love that breaks down easily.

THE DISTANCE – Sergio Caballero
A performance artist is being held in a deserted Siberian power station following the unexpected death of his oligarch patron. Dryly comic surrealism (with an attractive soundtrack and three telepathic dwarves) from Tiger Award winner Caballero.

IT’S US – Nick Reding
Convincing proof that an educational, political film made in Africa (Kenya) can also be good fun. Even comical. A nonchalant mix of film and theatre, inspired by the election riots of 2007: on mistrust in a fragile community.

JACKY IN WOMEN’S KINGDOM – Riad Sattouf
In the Kingdom of the ‘Bubunnes’, women are in power while men wear veils and do domestic tasks. Jacky, a lovely young man who dreams of marrying the colonel (Charlotte Gainsbourg) has to struggle like a Cinderella to realize his dreams. Delightful satire on gender, power and veggies.

THE MILITANT – Manolo Nieto
Endearing second film from Uruguayan Tiger Award winner Nieto. During a strike at the university, Ariel (uniquely played by Felipe Dieste) hears that his father has died. He is forced to return to the provinces to put financial affairs at his father’s ranch in order.

OBVIOUS CHILD – Gillian Robespierre
Stand-up comedian Donna is dumped by her cheating boyfriend, loses her job, gets blind drunk and becomes pregnant from a one-night stand. She considers an abortion, and then gets to know the father. Romance, quirky humour and irresistible characters.

R100 – Matsumoto Hitoshi
Games can be dangerous. Director Matsumoto (Dainipponjin/Symbol) has certainly proven he can go further with Japanese absurdism, but can he stay unflappable when the game gets out of control? Find out that SM involves more than latex and whips.

REIMON – Rodrigo Moreno
Her days consist of commuting and cleaning all over Buenos Aires. While Reimon vacuums, her wealthy clients read to each other, fascinated, from Marx’s Capital. The latest film from the maker of The Minder is sober and socially committed.

SEE NO EVIL – Jos de Putter
Poetic, painful documentary about three retired apes: a film star, a scientist and a cripple. They look back at their lives and the intriguing relationship between humans and apes. Who watches whom, and who learns from this?

TO KILL A MAN – Alejandro Fernández Almendras
In their poor neighbourhood, hardworking, well-intentioned Jorge and his family are terrorised by local criminal Kalule’s clan. Exciting, disturbing film confronts viewers with universal questions of vigilantism and the value of a life.