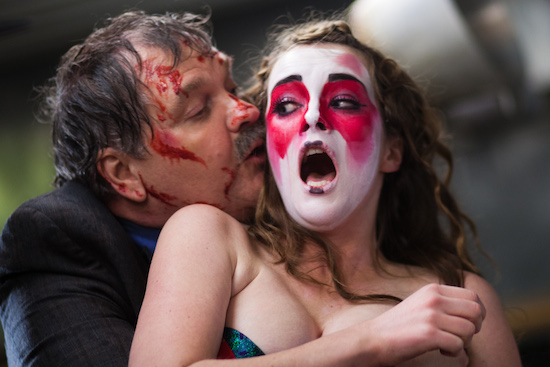 STAGE FRIGHT, described as a horror/comedy/musical about “bloodthirsty gorehounds and musical theatre geeks,” which world premieres in the Midnighters section at March’s SXSW Film Festival, will be released in the U.S. by Magnet Releasing, the genre division of Magnolia Pictures. STAGE FRIGHT is the feature film debut of writer/director Jerome Sable, director of the award-winning, festival favorite short, “The Legend of Beaver Dam” and stars Allie MacDonald and Douglas Smith, with Minnie Driver and Meat Loaf.  Magnet is releasing the film in its Ultra VOD program, launching it on iTunes and On Demand on April 3rd, followed by a theatrical release on May 9th.

“Scream” meets “Glee” in this dark comedy musical about a starry-eyed teenager Camilla Swanson who aspires to follow in the footsteps of her Broadway diva mother. Instead she’s stuck working in the kitchen of a snobby performing arts camp. Determined to change her destiny, she sneaks in to audition for the summer showcase and lands a lead role in the play, but just as rehearsals begin, blood starts to spill, and Camilla soon finds herself terrified by the horror of musical theater.

“As a fan of Magnet and the movies they release, I cannot tell you how excited I am that our film is on their roster,” said Sable. “I am honored that they’re helping me with my lifelong dream of bringing bloodthirsty gorehounds and musical theatre geeks a little bit closer together.”