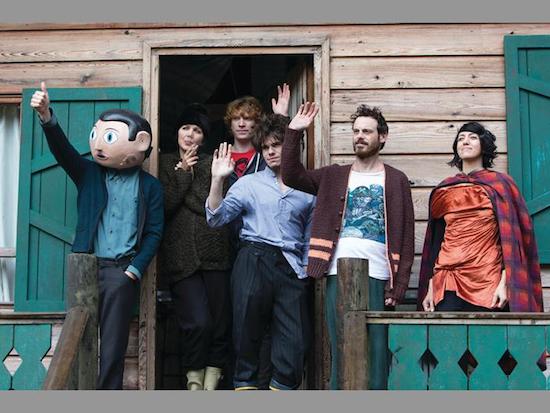 The Calgary Underground Film Festival (CUFF) announced the 2014 festival line up today. CUFF will bring 31 feature films from all over world to Calgary from April 7-13 at Globe Cinema. The festival opens on April 7, 2014 with the Canadian premiere of FRANK.  In the film, an amateur musician,Jon (Domhnall Gleeson) who finds himself mixed up with some seriously strange bandmates, led by the mysterious and enigmatic Frank (Michael Fassbender). Based on the memoir by Jon Ronson (THE MEN WHO STARE AT GOATS) and his experiences playing with ultimate outsider musician Chris Sievey.

Some highlights in the 2014 festival lineup include:

OPENING GALA – FRANK (Ireland/UK, 2014, 95 Min, Canadian premiere) April 7, 2014
An amateur musician,Jon (Domhnall Gleeson) who finds himself mixed up with some seriously strange bandmates, led by the mysterious and enigmatic Frank (Michael Fassbender). Based on the memoir by Jon Ronson (THE MEN WHO STARE AT GOATS) and his experiences playing with ultimate outsider musician Chris Sievey.

THE RAID 2 (Indonesia, 2013, 148 min, Canadian premiere) April 9, 2014
Only a short time after the first raid, Rama goes undercover with the thugs of Jakarta and plans to bring down the syndicate and uncover the corruption within his police force.

WETLANDS (Germany, 2013, 109 min, Canadian premiere) April 10, 2014
Helen (Carla Juri) is wild, brash and uncompromising, and a huge pain for her divorced parents. Based on author Charlotte Roche’s 2008 controversial and mega bestselling cult novel, WETLANDS pushes the boundaries of eroticism with an unabashedly sexual and intimate portrait of one young woman’s loves, longings and penetrating fantasies.

THE FOUND FOOTAGE FESTIVAL (USA, 2014, 90 min)  Tuesday April 8, 2014
A one-of-a-kind event showcasing videos found at garage sales and thrift stores and in warehouses and dumpsters throughout North America. Curators Joe Pickett (The Onion) and Nick Prueher (Late Show with David Letterman) take audiences on a guided tour of their latest and greatest VHS finds, providing live commentary and where-are-they-now updates on the people in these videotaped obscurities.

AS PLACES BURN (USA, 2013, 121 min) Thursday April 10, 2014
Hard touring, thrash metal supergroup Lamb of God are a force to be reckoned with. Vocalist Randy Blythe credits the band with saving his life, and after the group wraps up a global tour, he finds himself fighting for it. Charged with the death of a fan at one of the group’s shows, Blythe finds himself facing a lengthy sentence in a Czech prison. What started as a band portrait quickly becomes a nail-biting legal thriller.