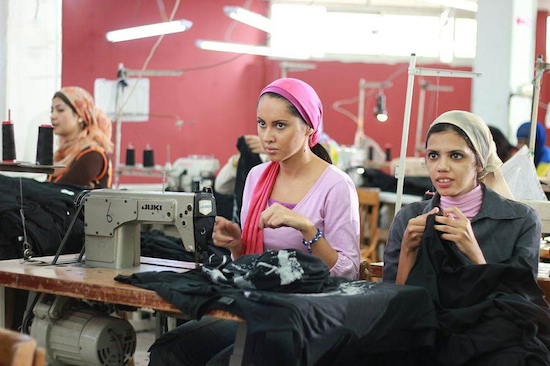 Check out the trailer for Mohamed Khan’s FACTORY GIRL which premiered last year at the 2013 Dubai International Film Festival, winning two awards, the Muhr Arab Feature Best Actress Award,  for Yasmine Raess, and the FEPRESCI (International Federation of Film Critics) Best Arab Feature award. Factory Girl was written by the director’s wife Wessam Soliman,  The film tells the story of one year in the life of Hiyam (played by Yasmine Raees), a young woman working in a clothing factory who falls in love with her supervisor.

Hiyam, a young factory worker, lives in a lower-middle-class neighbourhood, along with her co-workers. She is clearly under the spell of Salah, the factory’s new supervisor, who has expressed his admiration for her. She believes love can transcend the class differences between them. However, when a pregnancy test is discovered in the factory premises, her immediate family and close friends accuse her of sinning. Hiyam decides not to defend herself and pays an enormous price in a society that fails to accept independent women. FACTORY GIRL examines the changes that take place in her life over the four seasons of the year. From falling in love to facing heartbreak, her life comes around a full circle by the end of the year. DIFF