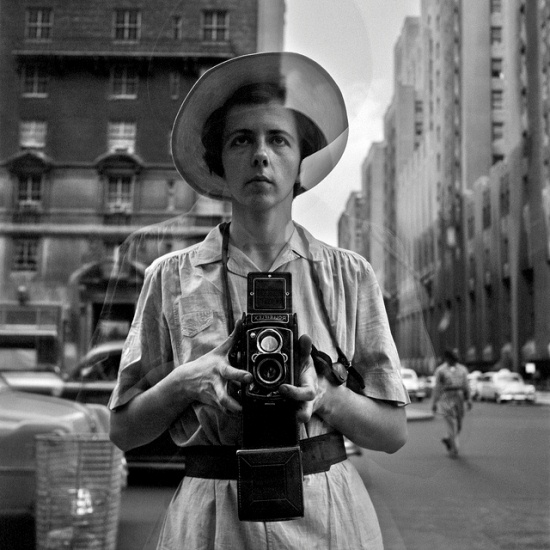 John Maloof and his brother were raised working at outdoor flea markets and swap meets with their father…From a very  early age, John Maloof could spot a deal. When working on a book about the history of Chicago, he attended an Auction at a small auctioneer’s store, sitting quietly in the back, and bidded a mere $780 for a box containing over 25,000 negatives shot by an unknown, female photographer. A savvy veteran of these auctions, and now a real estate agent and local historian, he was looking for photos and negatives of old-time Chicago, he was hoping to get a little lucky. He ended up purchasing, for even less money, tens of thousands of more negs and rolls of film, as well as most of her rmaining personal possessions from storage, from another buyer. All of these images had been taken by a woman named Vivian Maier.

As his life and work on the Chicago book took over, Maloof ended up simply  stashing away the old boxes in a closet for a long while. Dusting them off one day, hunting again for some random,  still images of Chicago, he began to discover some of the most insightful, gorgeous and timely images of street photography he had ever seen. Entranced by the glorious, black and white stills, and in possession of a sophisticated artistic instinct and taste,  he then set about to find out, exactly, just who this Vivian Maeir woman  really was.

Through meticulous research of the items and letters of hers that he had also purchased, he began the tremendous process of discovery: Maloof first started his search online, finding absolutely nothing. Being a self-proclaimed “obsessive kind of person,” Maloof tracked down a family that knew Maier well- who had in fact, had employed her. As their nanny.

During this same period, Maloof also begun further scanning several of the thousands of negatives he had (there were much, much fewer printed images of paper- and those were mostly damaged) and started sending them to art historians and museums, to see if he could somehow arrange a show, or gallery representation or opening.

He was, much to his great disappointment, systematically turned down by the art world. Maloof then set upon his newfound mission to bring Maier’s incredible photographs to the world on his own. Through actual live interviews with Maier’s now fully grown “charges,” we learn that the adults who employed her did not realize she was a serious photographer, but the children certainly did: They were dragged around to “bad” sections of town, docks, poor areas, were Maier somehow had the quiet charisma to elicit the most beguiling self-portraits from total and complete strangers. (The close-up portraits are especially, staggeringly impressive and moving.)

Maeir also lived and worked as a nanny in New York City, and this is where her photography comes into a thrilling, full, mature bloom: There are images of  ecstatic children, bums, glorious street scenes of all stripe, decaying urban landscapes and building fronts, tired businessmen, well-dressed dames, cops: All injected with incredible, dry bits of humor, gorgeous composition and highly intuitive, natural lighting. There is also her incredible ability to capture the explicit poignancy and miracle of the moment- the true gift of any street photographer. 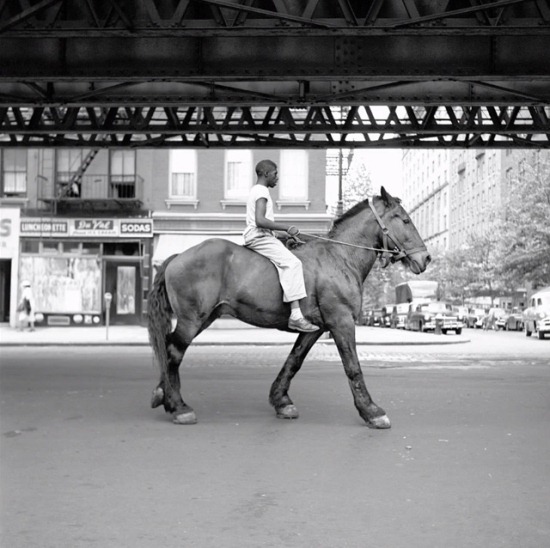 Naturally, as more of Maier’s now grown  “children” are candidly interviewed by Maloof (and his co-director and co-writer, Charlie Siskel) we realize there was a sad, haunting darkness in her a nature, and an obvious trauma from her past, that had prevented her from fully connecting with her art, and with other people, in general. As she aged, she also grew increasingly eccentric, and some of the charge’s tales turn increasingly disturbing. (Interestingly, though, it was three former young boys she cared for, who as grown men, took it upon themselves to rent her an apartment , supporting her after she retired.) 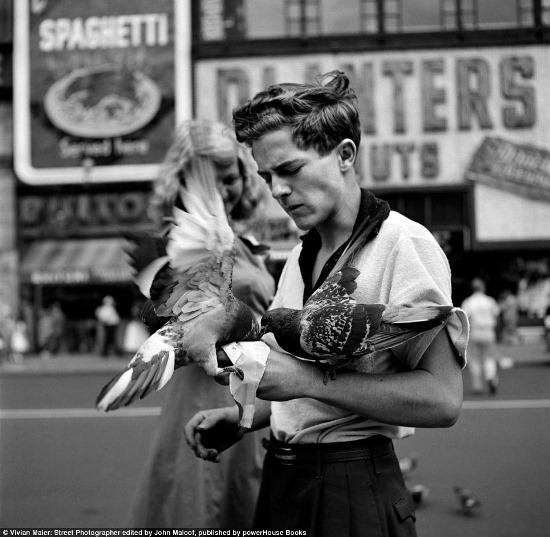 The interviews do make up the bulk of the film, as it always amazing to us to pick apart what composes the interior life of someone life- the ultimate in coulda-woulda- shoulda scenarios…But there is just enough of her work shown, in essence, to whet your appetite for more investigation into the actual images and her work, itself.

I have heard much controversy over Maloof appropriating these images and reaping the financial benefit…(Well before this film’s notoriety, he had made her a “star” already on the internet and print media with his incredible discovery) But honestly- I have to completely disagree: This “mission’ of John Maloof’s, may, in fact, eventually leave him a very wealthy man, (Maier’s prints are on sale and being collected by celebrities and collectors world-wide) but the extraordinary richness of Vivian Maier’s work, one can safely say, would not be known to us without his dedication and obsessive nature. Vivian Maier’s work is probably on par with that of  Diane Arbus and Robert Frank. Hopefully, she will be soon accepted by the art establishment just as she is by the mainstream media. This is a wonderful, inspiring film, especially if your inner-artist is dying to make a splash on the canvas, screen or page. One is left with the feeling that a person truly owes it to the world to show it what you’ve got- and that’s no mean feat for a small, wonderful film like this. Go see it- it opens March 28th in selected cities.

Lars von Trier's "Nymphomaniac Vol 2"-No Gain from Her Pain