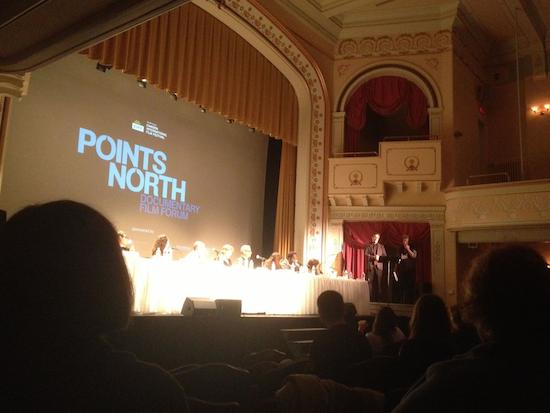 The Points North Fellowship enhances and expands upon the well-established Points North Pitch, a unique opportunity to pitch documentary works-in-progress to an international delegation of funders, commissioning editors and producers before a live audience. Five selected filmmakers (or filmmaking teams) will receive two VIP passes to the festival, four nights of accommodations and a stipend to subsidize their travel to Camden. The fellowship will begin with a day of intensive pitch training in partnership with the Maine Media Workshop (MMW) and focused industry mentorship held at the MMW’s Campus prior to the start of the festival, followed by the fifth annual Points North Pitch, held in the Camden Opera House on September 27, 2014.

In January 2015, all Points North Fellows will receive a ticket to the Cinema Eye Honors, an invitation to CIFF’s annual nominees party and two nights of accommodations in NYC. These events will give fellows an opportunity to connect with the wider documentary community and follow up on their pitches by setting up targeted meetings with industry delegates.

Submissions for the Points North Fellowship are now open through July 18, 2014. http://camdenfilmfest.org/pointsnorth

Points North Pitch Alumni currently traveling the festival circuit include Mike Attie and Meghan O’Hara’s In Country (Points North Pitch Winner 2012), which held its World Premiere at Full Frame in April, and Aaron Naar’s Mateo, which recently premiered at SXSW. Other notable films that have pitched at Points North include the critically-acclaimed Leviathan and the award-winning Betting the Farm.

The Points North Documentary Forum is made possible by the generous support of the National Endowments for the Arts, the LEF Foundation, the Maine Arts Commission, The Fledgling Fund, Maine Technology Institute and the Maine Media Workshops.