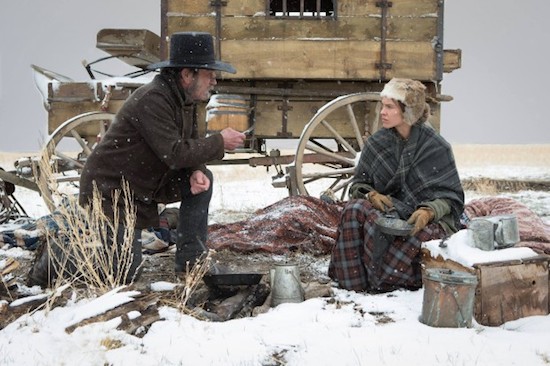 Directed by Tommy Lee Jones, THE HOMESMAN is based on the novel by Pulitzer Prize nominee Glendon Swarthout. When three women living on the edge of the American frontier are driven to the brink, the task of saving them from their surroundings falls to the pious, independent-minded Mary Bee Cuddy (Hilary Swank). Transporting the women by covered wagon to Iowa, she soon realizes just how daunting the journey will be, and employs a feisty low-life drifter, George Biggs (Tommy Lee Jones), to join her. The unlikely pair and the three women (Grace Gummer, Miranda Otto, Sonja Richter) head east, where a waiting minister and his wife (Meryl Streep) have offered to take the women in. But the group first must traverse the harsh Nebraska Territories marked by stark beauty, psychological peril and constant threat. Roadside Attractions and Saban Films will release the film on November 14, 2014.“Beginning our 22nd annual film festival announcement with the highly acclaimed film from Tommy Lee Jones as our Centerpiece and having Hilary Swank be a part of our Signature program Conversation with… is the tip of what HIFF will showcase this year,”says Anne Chaisson, Executive Director of the festival.

The Hamptons International Film Festival unveiled the first three films screening in its “Views from Long Island” section.  Set against the beautiful backdrop of the eastern end of Long Island, the upcoming SHOWTIME® series “The Affair” explores two marriages and the emotional and psychological effects of the affair that disrupts them. The provocative drama stars Dominic West, Ruth Wilson, Maura Tierney, and Joshua Jackson and premieres on Sunday, October 12, at 10:00pm ET/PT on SHOWTIME.

Lou Howe’s GABRIEL, much of which was filmed in the Hamptons, stars Rory Culkin as Gabriel. Longing for stability in the throes of mental illness, Gabriel will stop at nothing until he proposes to his high school girlfriend – never mind the fact that they haven’t seen each other in years. A sure-footed portrait of a young man on the edge, Howe’s debut feature examines our fixation with the nuclear household, and whether or not it’s all it’s cracked up to be.

The festival will hold the New York premiere of Amagansett resident Volker Schlöndorff’s DIPLOMACY. At the end of World War II, General Dietrick von Choltitz, the governor of Nazi-occupied Paris, received an order to destroy the city if the Nazis were to lose it to Allied Forces. Adapted from the stage and directed by legendary German filmmaker Volker Schlöndorff, DIPLOMACY is deeply connected with its moment in history, yet resounds with timeliness in its study of diametrically opposed ideologies and the necessary search for common ground.

The short film WEENIE will mark its world premiere at the festival. WEENIE was filmedin East Hampton, and filmmaker Dan Roe lives in Sag Harbor, teaching at the Ross School. The film’s main character Weenie is 16. Weenie wants to go to a party. Weenie has just been grounded. Weenie’s mom just doesn’t understand. What will Weenie do?

Returning for the sixth year, the Suffolk County Film Commission will present their annual Next Exposure Award, with a cash value of $6,000, to one of the full-length features in the “Views From Long Island” section.