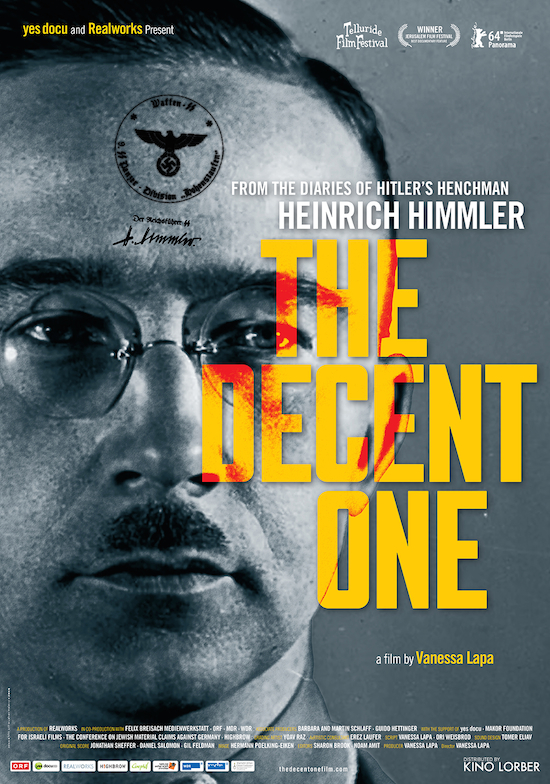 THE DECENT ONE, a documentary that reveals the secret personal writings and photographs from the private life of Nazi SS Commander Heinrich Himmler, simultaneously providing a remarkably authentic account of the reality of Nazi Germany, will be released this Fall by Kino Lorber.. Winner of the Best Documentary award at the 2014 Jerusalem Film Festival, THE DECENT ONE premiered at this year’s Berlin Film Festival, and will open at Laemmle Theaters in Los Angeles on October 10 and at Film Forum in New York on October 1. A national release will follow.

A recently discovered cache of hundreds of personal letters, diaries and photos belonging to the Nazi Gestapo chief seems to reveal a thoughtful, loving husband and devoted father to his daughter. The documents first found in the Himmler’s family house in 1945 were hidden in Tel Aviv for decades and sold to the father of the Israeli documentary filmmaker, Vanessa Lapa. Through readings of Himmler’s and his family’s most personal writings and rarely seen restored film footage from key German archives, Lapa has fashioned a fascinating case study: a portrait of the man responsible for some of the worst atrocities of the Second World War, who thought of himself in heroic terms.

On Hitler’s behalf, Himmler formed the country death squads, masterminded its concentration camps and built Nazi Germany’s extermination camps. As the facilitator and overseer of these camps, Himmler directed the killing of some 6 million Jews, between 200,000 and 500,000 Romani people, and an untold number of other victims including homosexuals, Communists, as well as Polish and Soviet citizens.

Psychologists, historians and moralists have long debated how seemingly ordinarily people can do monstrous things. The jaw-dropping discrepancies Lapa discovers between Himmler’s self-image and his historical role casts a new, piercing light on the human capacity for self-delusion and the very nature of evil.