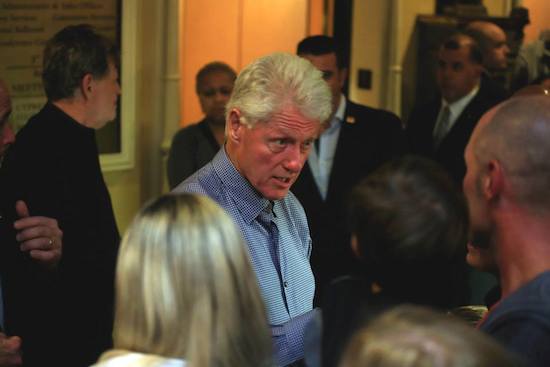 Filmmakers and special guests attended Hot Springs Documentary Film Festival held from October 10 – 19, 2014, to celebrate the best in documentary film from around the world, including visits by actor George Takei, the musical family of Arkansas icon Glen Campbell, actress/director/producer Joey Lauren Adams, former Olympic Diving Champion Greg Louganis, producer/director Harry Thomason, Arthur Agee of Hoop Dreams, illusionist James Randi and many more. Former President Bill Clinton made a stop at this year’s festival. Mr. Clinton has been a long-time supporter of HSDFF from its beginnings in 1991 as the first all-documentary film festival in North America.

Glen Campbell…I’ll be Me opened the festival on October 10, 2014. Directed and produced by James Keach (Walk The Line) and produced by Trevor Albert (Because of Winn Dixie, Groundhog Day), this powerful portrait of the life and career of great American music icon opened to the viewer the world of the singular talent who created hits like Rhinestone Cowboy, Wichita Lineman and Gentle on My Mind.

Hot Springs audiences joined actor and activist George Takei on his playful and profound trek for life, liberty, and love as Jennifer Kroot’s To Be Takei closed the festival on Saturday, October 18. Special guest Takei took part in an exclusive Q&A at the conclusion of the film and mingled with guests following the screening event.

Over seven decades, George Takei boldly journeyed from a WWII internment camp, to the helm of the starship Enterprise, to the daily news feeds of hordes of social media fans. Now a new documentary, To be Takei, takes a closer look at the many roles played by this eclectic 77-year-old actor/activist, whose wit, humor and grace have helped him to become an internationally beloved figure and Internet phenomenon with 7-million Facebook fans and counting.