Documentary ‘THE LAST PATROL’ to Debut on HBO November 10 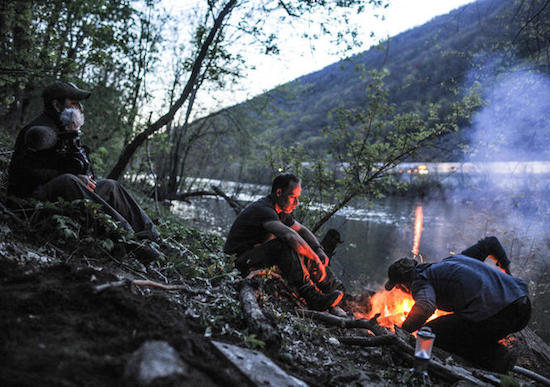 A few years ago, Oscar®-nominated filmmaker Sebastian Junger (“Restrepo”) planned a walk from Washington, D.C. to New York City along Amtrak railroad lines with his close friend, acclaimed war reporter Tim Hetherington. After Hetherington was killed covering the Libyan civil war in 2011, Junger decided to take the same trip, joined instead by a Spanish photographer who was at Hetherington’s side when he died and two combat vets they’d known in Afghanistan.

Junger was accompanied by combat veterans Brendan O’Byrne (previously seen in “Restrepo”) and Dave Roels, as well as acclaimed Spanish photojournalist Guillermo Cervera. Naming their journey The Last Patrol, they walked from D.C. to Philadelphia and then turned west, away from the cluttered Northeast Corridor, and headed for the Allegheny Mountains and Pittsburgh.

Junger chose railroad lines because, he believes, “they go straight through the middle of everything,” including ghettos, suburbs, farms and woods, and offer the only way to see the country from the inside out. The group decided not to take tents, since brightly-colored nylon attracts too much attention. Instead, they slept under bridges, in abandoned buildings or simply in the woods. This high-speed vagrancy saw them bathing in rivers, getting water out of creeks, cooking over open fires and talking their way past motorcycle gangs, COPS and suspicious homeowners.

After extensive experience in combat and the loss of good friends, all four men declared they never wanted to go to war again. The goal was to get to know America again after a decade of war, and discuss why combat is so incredibly hard to give up. The Last Patrol recreated the hardship, brotherhood and closeness of combat, without getting fired upon – except once in Pennsylvania.

In conjunction with the film’s premiere, Manhattan’s Anastasia Photo will present Guillermo Cervera’s first solo exhibition in New York, scheduled to run from Oct. 24 to Jan. 4.  In addition to photos he took during the filming of THE LAST PATROL, the show includes selections from 20 years of documenting armed conflict and social issues around the world.

Sebastian Junger is a New York-based writer, journalist and filmmaker. THE LAST PATROL concludes his trilogy on war, following 2014’s “Korengal” and “Restrepo,” which he co-directed with Tim Hetherington. “Restrepo” won the 2010 Grand Jury Prize at Sundance Film Festival and was nominated for an Academy Award® for Best Documentary Feature the following year. Junger’s accompanying book, “War,” was a New York Times bestseller. His other books include “The Perfect Storm,” which was adapted for the hit feature film of the same name, “Fire” and “A Death in Belmont.”

Junger’s other credits include the 2013 HBO documentary “Which Way Is The Front Line From Here? The Life And Time Of Tim Hetherington.”