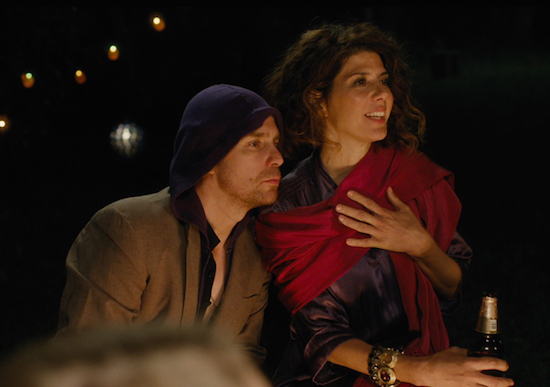 Dominic (Michael Godere) is a young actor who has little success. He works with an older, close friend Raphael (Ivan Martin) as bartenders. Raphael is also an actor who is only slightly more successful than Dominic (a character asks Raphael about a Woody Allen movie he appeared in – Martin himself had a small role in 2002’s Hollywood Ending). Frustrated by their lack of success, the two take a chance meeting with a producer as an opportunity to tell her about a script they’ve written for themselves to star in… though they haven’t actually written it yet. They have ten days to deliver a script, so they decide to hole up at Dominic’s sister Gigi’s house in the country to avoid distractions.

However, they find themselves faced by even more distractions shortly after they arrive. First, a beautiful gardener named Ava (Isabelle McNally) arrives, and shortly afterwards Gigi (Marisa Tomei) shows up wasted with a life full of problems with her boyfriend Wayne (Sam Rockwell). Raphael decides to have fun with the girls – he has a past with Gigi – but Dominic is intently focused on the script. Wayne himself shows up later with his dimwitted surfer brother Devon (Brian Geraghty). The mix of personalities not only prevents Dominic and Raphael from getting work done, but it dredges up jealousies that turn the creative getaway to a binge of drama.

LOITERING WITH INTENT has one of those plots in which the film’s setup veers into a completely different direction. If you’re expecting to see a film about two actors trying to write a script to save their careers, well, you’ll be disappointed because LOITERING WITH INTENT really has very little do with that after the first ten minutes. Once the ladies are introduced, the script gradually fades from importance in the narrative.

That is the real issue with the film, which actually was written by Godere and Martin in an art imitates life situation. A unique setup quickly turns into an undistinguished drama about a house full of people who barely tolerate each other, let alone trust each other. There are plenty of hurt feelings to go around, but not necessarily the type of drama that is unique enough to engage you. The most interesting thing about the two leads – that they’re actors who try to write a script in a desperate attempt to jumpstart their careers – is quickly forgotten. It doesn’t mean that the other characters aren’t particularly interesting – Tomei’s Gigi and Rockwell’s Wayne have a relationship whose surface is just skimmed and Geraghty’s Devon is very funny when he isn’t being a surfer dude stereotype – but what they bring to the narrative isn’t as interesting as Dominic and Raphael’s relationship and what they are working on.

Director Adam Rapp had a strong feature directorial debut with the 2005 Zooey Deschanel/Will Ferrell dramedy Winter Passing (which Martin also appeared in). He hasn’t done work as impressive as his debut since, and LOITERING WITH INTENT is not a step in the right direction for him.

LOITERING WITH INTENT opens on VOD on VOD on December 16 and in select theaters on January 16.