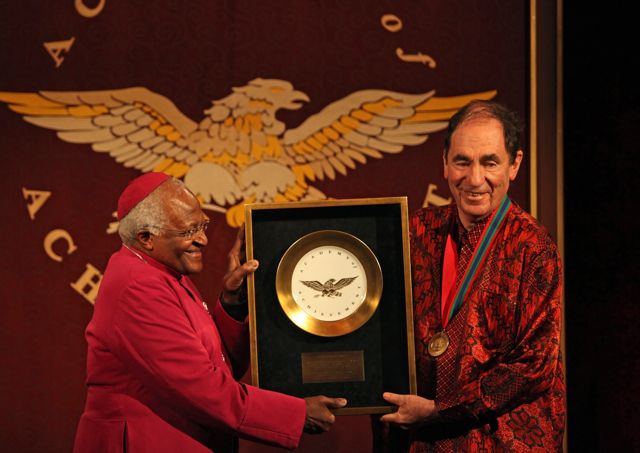 Abby Ginzberg’s feature documentary film SOFT VENGEANCE:  ALBIE SACHS AND THE NEW SOUTH AFRICA will be honored at the 74th annual Peabody Awards ceremony it was announced today by the Peabody program at the University of Georgia.  The critically acclaimed film will receive the coveted Peabody Award at a gala ceremony in New York City on May 31st.

“We hope this incredible award will help increase the visibility of Albie Sachs and inspire others to fight for human rights around the world,” commented the film’s director Abby Ginzberg.  “Albie Sachs is one of the key champions for equality of our time and we are honored to be entrusted with his legacy on film,” she concluded.

SOFT VENGEANCE is set against the dramatic events leading to the overthrow of the apartheid regime in South Africa and focusses on the lawyer, writer, art lover and freedom fighter Albie Sachs.  The human rights activist was imprisoned in solitary confinement in Cape Town, tortured through sleep deprivation and forced into exile. In 1988, he was blown up by a car bomb set by the South African security forces in Maputo, Mozambique, which cost him his right arm and the sight of one eye, but miraculously he survived and after a long year of rehabilitation in England, he recovered.  Returning to South Africa following the release of Nelson Mandela, Albie helped write the new Constitution and was then appointed as one of the first 11 judges to the new Constitutional Court.

SOFT VENGEANCE has been screening at film festivals around the world and has won the audience award for Best International Documentary at the Encounters Film Festival and the Vancouver South African Film Festival.  It has also received the Grand Prize Humanitarian Award from the Accolade Film Awards.  After premiering at the Full Frame Documentary Film Festival, it also screened at AFI Docs; DOCNYC, Movies that Matter and the Durban Film Festival in South Africa.  The film also screened at key international Jewish film festivals.

The film is executive produced by Alfre Woodard, who also serves as narrator.  Abby Ginzberg is the producer and director, Ken Schneider is the Editor and Co-Producer and Rick Goldsmith is the Consulting Producer.