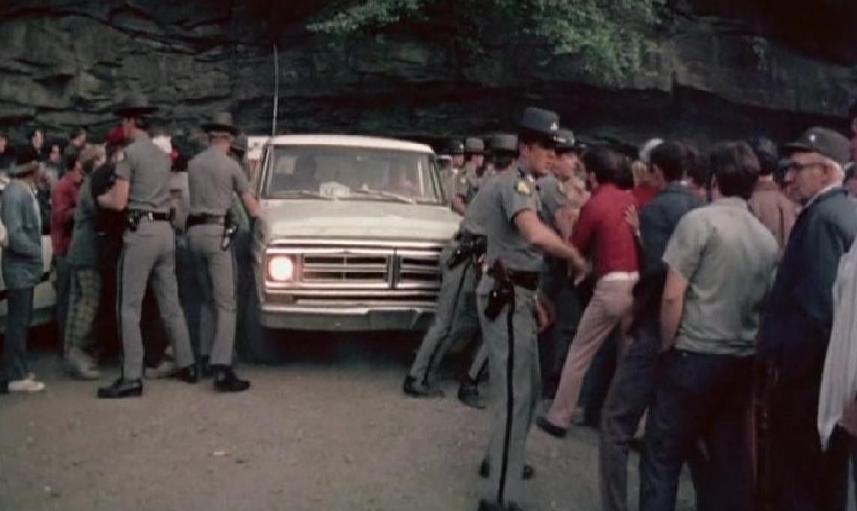 The Toronto International Film Festival announces the lineup for its 2015 TIFF Cinematheque program, featuring both 35mm prints as well as new digital restorations of classic films from around the world including Marcel Ophüls’ The Memory of Justice, Luchino Visconti’s Rocco and His Brothers and Kelly Reichardt’s River of Grass.

“We believe that cinema has a rich heritage that must be protected, celebrated and preserved for current and future generations. This year’s TIFF Cinematheque lineup highlights our commitment to both preservation and restoration,” said TIFF programmer Brad Deane. “We’re thrilled to present some of the best new digital restorations along with some beautiful new 35mm prints, embracing both the future of the medium as well as the past.”

Other works include Harlan County, USA — the debut documentaries from Barbara Kopple which also screened at the very first Toronto International Film Festival in 1976 — and Frederick Wiseman’s searing Titicut Follies, which returns to the big screen with a newly restored 35mm print. Both Wiseman and Kopple have their latest films in the 2015 TIFF Docs program.

Also screening is another TIFF-commissioned 35mm print of Jacques Rozier’s Adieu Philippine, an oft-overlooked French New Wave gem; and a digital restoration of The Round-Up (Szegénylegények), a landmark of post-war cinema from Hungarian master Miklós Jancsó.

The lineup features selections by the TIFF Cinematheque programming team led by Brad Deane, Senior Manager of Film Programmes, and including James Quandt, Thom Powers and Jesse Wente. TIFF Cinematheque is now in its 25th year.

As part of TIFF’s ongoing commitment to accessible film education, tickets to all TIFF Cinematheque screenings during the Festival are free and will be distributed at the Steve & Rashmi Gupta Box Office at TIFF Bell Lightbox on a first-come, first-served basis two hours before each film screening.

Films screening as part of the TIFF Cinematheque program include:

Adieu Philippine
Jacques Rozier, France/Italy
Set under the looming shadow of the Algerian war, Adieu Philippine follows a young television cameraman who meets and attempts to seduce two beautiful, inseparable young women. The trio’s frolicking fun takes them from the streets of Paris to a Corsican holiday tinged with melancholy.

Harlan County, USA
Barbara Kopple, USA (pictured above)
Harlan County, USA chronicles a fiercely contested labour battle in Kentucky during the early 1970s. The strike began when the miners working for the Eastover Mining Co. joined the UMW, and its corporate parent, Duke Power, refused to sign the standard union contract. By living with the 180-odd families involved in the strike, Kopple shows the backbreaking burdens of the miners’ life in the best of times and the looming fear of destitution in the worst. While the film is unabashedly partisan, it’s worth remembering that the company’s refusal to sign a contract was condemned by the National Labor Relations Board and that the corporation agreed to sign only under heavy pressure from federal mediators.

The Mask (Eyes of Hell)
Julian Roffman, Canada
Newly restored by TIFF and the 3-D Film Archive, director Julian Roffman’s deliciously creepy tale about a haunted tribal mask was the first feature-length horror movie and first feature-length 3-D film produced in Canada. Using elements from the best remaining 35mm prints, TIFF and the 3-D Film Archive have digitally restored the film’s original cut in both anaglyph and polarized 2K 3D. The Mask was restored with the support of TIFF’s donors and members, who contributed to a crowd-sourced fundraising campaign to launch the project.

The Memory of Justice
Marcel Ophüls, United Kingdom/USA/Germany
This epic documentary by Marcel Ophüls (The Sorrow and the Pity) meditates on Western society’s concepts of justice through comparisons of war crimes in Vietnam, Algeria, and Nazi Germany.
Restoration by the Academy Film Archive in association with Paramount Pictures and The Film Foundation. Restoration funding provided by The Material World Charitable Foundation, Righteous Persons Foundation, and The Film Foundation.

River of Grass
Kelly Reichardt, USA
Shot on 16mm, the story follows the misadventures of disaffected housewife Cozy, played by Lisa Bowman, and the aimless layabout Lee, played by indie legend Larry Fessenden, who also acted as a producer and the film’s editor. Described by Reichardt as “a road movie without the road, a love story without the love, and a crime story without the crime,” River of Grass introduces viewers to a director already in command of her craft and defining her signature themes.
Preserved by UCLA Film & Television Archive in conjunction with Oscilloscope Laboratories and Sundance Institute. Preservation Funding provided by Oscilloscope Laboratories, Sundance Institute, TIFF, and a number of very generous Kickstarter backers.

The Round-Up (Szegénylegények )
Miklós Jancsó, Hungary
The first of Hungarian master Miklós Jancsó’s historical epics is set in an isolated concentration camp in the 1860s, where imperial authorities use brutal methods to discover the nationalist rebels hiding within the ragtag group of prisoners.
A presentation of the Hungarian National Film Fund and the Hungarian National Digital Film Archive and Film Institute (MaNDA).
Restoration 2K image and sound by the Hungarian Filmlab from 35mm negative.

Titicut Follies
Frederick Wiseman, USA
Titicut Follies is a stark and graphic portrayal of the conditions that existed at the State Prison for the Criminally Insane at Bridgewater, Massachusetts. The film documents the various ways the inmates are treated by the guards, social workers and psychiatrists.
Preserved by Library of Congress National Audio Visual Conservation Center.

The 40th Toronto International Film Festival runs from September 10 to 20, 2015.