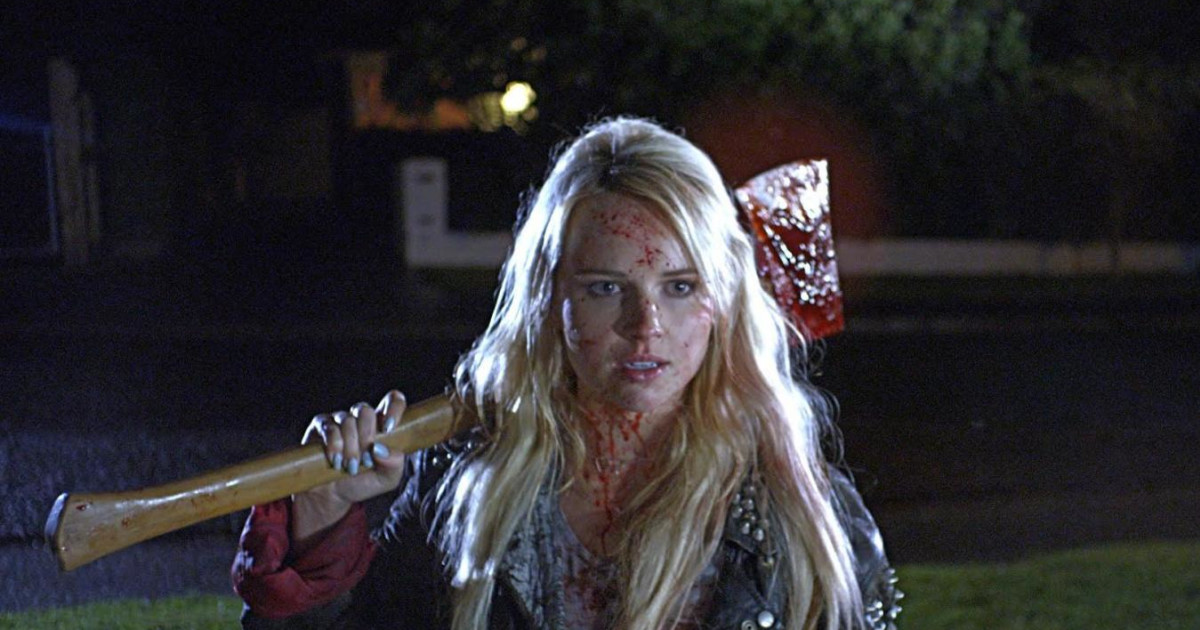 DEATHGASM (New Zealand) Toronto Premiere & Closing Gala Film (pictured above)
In the latest crowd-pleasing horror-comedy from New Zealand that’s taken the festival circuit by storm since its debut at SXSW, a group of metalhead outcasts unwittingly unleash a horde of vicious demons upon their sleepy suburban neighborhood. Now they’ll have to engage in an epic duel of blood and metal with Satan’s hordes if they’re to win back their town.

LAZER TEAM (USA) Canadian Premiere
Web series gods Rooster Teeth hit it out of the park with their feature film debut, a crowd-pleasing sci-fi action comedy. When Earth is threatened by an advanced alien race, the planet’s only hope lies in four morons, the self-proclaimed “Lazer Team” and some high tech weaponry that’s never been tested before!

NINA FOREVER (U.K.) Toronto Premiere
Winning rave reviews on the fest circuit, this twisted, messed-up, dark horror comedy from Britain is about a young man trying to start a new relationship with a supermarket co-worker while all the time being stalked by his very jealous, very dead, ex-girlfriend.

A CHRISTMAS HORROR STORY (Canada) Toronto Premiere
A delightfully creepy, Yule-themed horror tale from the same talented team behind the GINGER SNAPS movies. Living icon William Shatner stars as local radio DJ Dan working the Christmas Eve graveyard shift, when all hell breaks loose around him in the snow-covered town of Bailey Downs. Santa’s having the most terrible night of them all, having to fight off an outbreak of zombie elves heralding the arrival of his evil nemesis, the monstrous Krampus!

TAG (Japan) Toronto Premiere
From the warped mind of acclaimed Japanese director Sion Sono (SUICIDE CLUB, LOVE EXPOSURE, WHY DON’T YOU PLAY IN HELL)  comes a shocking, satirical, horror-action-thriller about three Japanese schoolgirls in the race of their lives as they try to outrun a mysterious malevolent force that’s brutally killing every girl around them.

LOVE & PEACE (Japan) Toronto Premiere
A wildly imaginative Japanese fantasy/monster movie mashup about a down-trodden office worker who aspires to be a rock star and his pet turtle who wants to grow up to be a giant city-destroying creature like Godzilla! Don’t miss this one-of-a-kind cinematic delight from the eccentric mind of director Sion Sono (SUICIDE CLUB, LOVE EXPOSURE, WHY DON’T YOU PLAY IN HELL) that’s rightfully winning Audience Awards!

THE DEMOLISHER (Canada) Toronto Premiere
A hypnotic, dark, award-winning thriller about a mentally unstable vigilante, The Demolisher, who deals with his personal frustrations by donning a suit of body armour and prowling the streets at night, delivering brutal justice to those he feels deserve it. The film’s atmospheric nocturnal city landscape is superbly enhanced by a fantastic synth score from Glen Nicholls aka Future Funk Squad!

SYNCHRONICITY (USA) Toronto Premiere
From Jacob Gentry (Sundance hit THE SIGNAL) comes another smart, dark, sci-fi thriller, this time heavily influenced by the noir ambiance of BLADE RUNNER. A brilliant young scientist tries to crack the secret of time travel whilst thwarting the advances of a sinister corporate leader (portrayed by fan fave villain Michael Ironside), while falling for a mysterious woman whose suddenly appeared in his life.

PATCHWORK (USA) International Premiere
A delightfully dark, Frankenstein-themed horror comedy about a re-animated corpse, made from the stitched together body parts of three murdered young women, that decides to go on a bloody quest to find their killer and avenge their deaths!