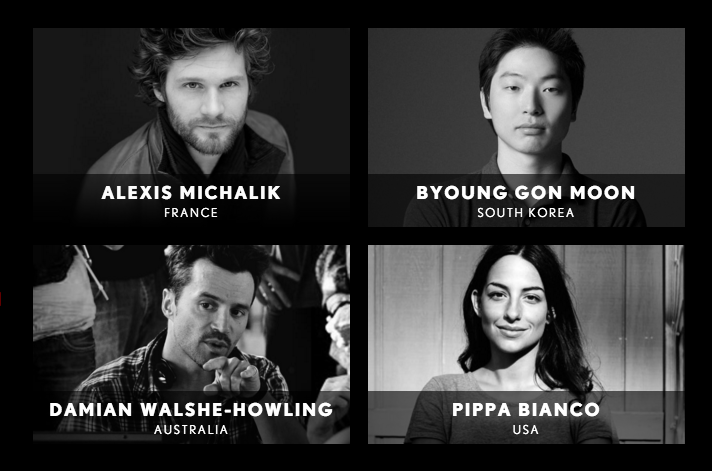 The four finalists will also receive promotional theatrical distribution for their short films, participate in a tour of top film festivals around the world and receive an at-home filmmaking and editing suite.

The Weinstein Company co-chairman Harvey Weinstein said, “The Lexus Short Films series has been a fantastic partnership to help discover young filmmakers while shining a light on the short film format. This year’s Lexus Short Films series provided an opportunity to reach aspiring filmmakers around the world looking to gain exposure and experience through the chance to work with Lexus and The Weinstein Company. We have been truly impressed by the number and quality of submissions received with more than 4,000 submissions from over 100 countries. We look forward to helping the finalists turn their visions into truly great films.”

1. Alexis Michalik (France, Europe)
Alexis is an actor and filmmaker who has starred in several television movies and series, such as Petits meurtres en famille, Terre de lumière and Kaboul Kitchen and feature films directed by Billy Zane, Diane Kurys, Safy Nebou, Yann Samuel, Fernando Colomo, Danièle Thompson and Alexandre Arcady. Alexis is also known for acting successfully in theater in the comedy Le Dindon, staged by Thomas Le Douarec, and Ibsen and Strindberg’s Les Fleurs Gelées. He is the founder of the theater company Los Figaros and after directing two short films, Au Sol, in 2013 and Pim-Poum le petit Panda, in 2014, Alexis continues to pursue his writing career and will direct his first feature film Escort Boys.

3. Damian Walshe-Howling (Australia, Oceania)
Damian is an acclaimed actor and filmmaker best known for his latest short film, Suspended, which recently screened in the official competition at international film festivals including St Kilda, Flickerfest, Nashville and Locarno in Switzerland. He is also known for his 2007 debut short film The Bloody Sweet Hit. Damian has a passion for storytelling which has taken him all over the world in pursuit of culturally diverse stories and roles. He received an AFI Award for Best Supporting Actor in 2008 for his performance of Melbourne’s “Most Loved Murderer”, Andrew Benji Veniamin, in the original Underbelly series.

4. Pippa Bianco (United States of America, North America)
Pippa is a filmmaker who studied photography at Yale University and is currently writing and producing at Beyoncè’s Parkwood Entertainment, directing a commission for the Los Angeles County Museum of Art, and a writing credit on the upcoming film Bleed For This. Pippa started her career by working in independent film – assisting on Braden King’s Here (Sundance 2011) and Leslye Headland’s Bachelorette (Sundance 2012). Since then, Pippa’s films have been selected and won awards at numerous festivals including Telluride and SXSW. Pippa was also chosen as one of nine filmmakers for the American Film Institute’s Women’s Directors Program fellowship in 2014, where her short film submission, Share, won the 1st Prize in the Cinéfondation category at this year’s Cannes Film Festival. Continuing her success with AFI, she is a Yaddo Filmmaker-in-Residence for the 2015-2016 term.

"Pardon the Intrusion" "Keep in Touch" "Omo Child: The River and the Bush" Among Winners of 2015 Charleston International Film Festival