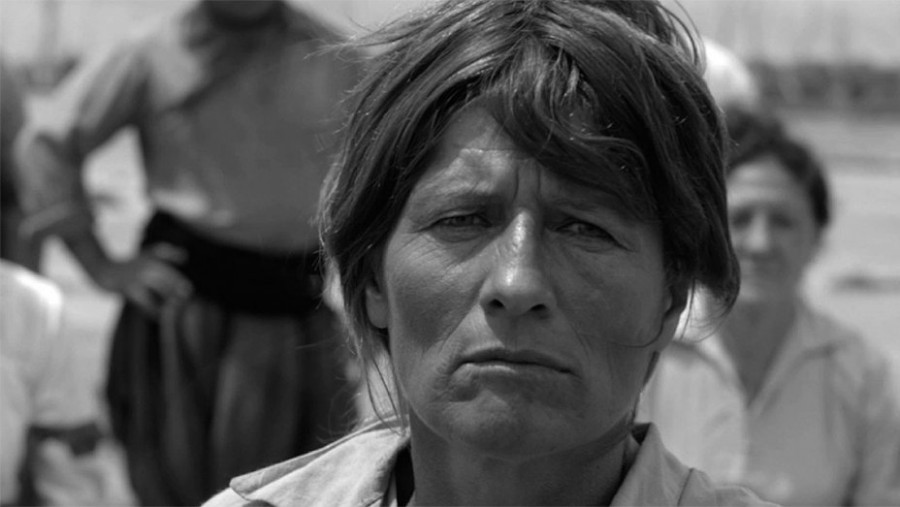 The Film Society of Lincoln Center in New York City announces Neighboring Scenes, a new showcase of contemporary Latin American cinema co-presented with Cinema Tropical. Opening the series is Benjamín Naishtat’s El Movimiento (pictured above), a stark, black-and-white snapshot of anarchy in 19th-century Argentina and follow-up to his acclaimed debut, History of Fear.

“It’s been some years since Latin American cinema ‘reemerged,’” said Programmer at Large Rachael Rakes. “Now, as the output from countries like Mexico, Argentina, and Brazil continues to be some of the most compelling and engaged cinema today, new scenes are establishing themselves all across the map, showcasing fresh talent and ideas, and challenging the notion of an identifiable contemporary Latin American cinema. We’re pleased to highlight a few of the most impressive recent films from the region.”

Opening Night
El Movimiento
Benjamín Naishtat, Argentina, 2015, DCP, 70m
Spanish with English subtitles
Continuing his preoccupation with violence and Argentina’s past, Benjamín Naishtat (History of Fear, a New Directors/New Films 2014 selection) dramatizes a crucial moment in that nation’s history characterized by political zealotry and terrorism. Pablo Cedrón portrays the fiery, unhinged leader of a mysterious militia (modeled on Confederacy-era dictator Juan Manuel de Rosas’s Mazorca) who wantonly roam the pampas in an effort to “purify” and unite society, killing and plundering settlers along the way. Characters emerge from and disappear into dark expanses—the film is masterfully shot in black and white—heightening its intense, chilling atmosphere. Funded by the Jeonju Digital Project.

Alexfilm
Pablo Chavarria Gutiérrez, Mexico, 2015, DCP, 60m
Spanish with English subtitles
Marked by a light touch and emphasizing openness over conventional, linear narrative, biologist-turned-filmmaker Pablo Chavarria Gutiérrez documents the rhythms of a man awaiting an important event that never comes. As he cooks breakfast, naps, paints, tries on sunglasses, and wanders through different rooms in his home, Chavarria Guitérrez lovingly frames every action in beautiful natural light, allowing each moment to flow to the next while maintaining its own transcendent essence. North American Premiere

Gulliver
María Alché, Argentina, 2015, DCP, 25m
Spanish with English subtitles
Flawlessly transitioning from a highly naturalistic family tale to something overtly surreal and back again, Gulliver captures the circumstances—imagined or not—of one of those evenings when siblings come to a deeper understanding of one another. After hanging out at home with their mom (Martín Rejtman regular Susana Pampin) and older sister Mariela (Agustina Muñoz), Agos and Renzo go to a raging party where Agos ends up drinking too much. Upon stepping outside to recover, the pair wander into a strange but familiar landscape, and begin to ask questions about the world and themselves.

Bleak Street / La calle de la amargura
Arturo Ripstein, Mexico/Spain, 2015, DCP, 99m
Spanish with English subtitles
Based on a true story, the latest feature by Arturo Ripstein is an unflinching look at the mean streets of El Defectuoso. Two prostitutes, Adela (Nora Velázquez) and Dora (Patricia Reyes Spíndola), are burdened by horrible marriages and financial problems stemming from their long-departed youth. In an attempt to make ends meet, they drug and rob dwarf twins (Juan Francisco Longoria and Guillermo López)—who themselves barely scrape by as doubles for professional luchadores. Ripstein masterfully contrasts the grittiness of alleyways and seedy apartments with gliding Steadicam cinematography, siding with neither the victims nor the perpetrators. A Leisure Time Features release. U.S. Premiere

The Club / El Club
Pablo Larraín, Chile, 2015, DCP, 98m
Spanish with English subtitles
Pablo Larraín (director of No and Post Mortem) continues to explore the long shadows of Chile’s recent past with this quietly scathing film about the Catholic Church’s concealment of clerical misconduct. Four aging former priests peacefully live out their days together in a dumpy seaside town, focused on training their racing greyhound rather than doing penance for their assorted crimes. Their idyll is shattered when a fifth priest arrives and, confronted by one of his victims, commits suicide. A young priest begins an investigation into the retirees’ pasts, setting off a series of events that call into question faith, piety, and complicity. Winner of the Silver Bear at the 2015 Berlinale and Chile’s Oscar submission. A Music Box Films release.

The Gold Bug, or Victoria’s Revenge / El escarabajo de oro o Victorias Hamnd
Alejo Moguillansky & Fia-Stina Sandlund, Argentina/Denmark/Sweden, 2014, DCP, 102m
Spanish and Swedish with English and Spanish subtitles
Fusing elements of Edgar Allan Poe’s titular short story and Robert Louis Stevenson’s Treasure Island, Alejo Moguillansky and Fia-Stina Sandlund’s meta-film follows an Argentine-Swedish co-production in Buenos Aires shooting a biopic of the 19th-century realist author and proto-feminist Victoria Benedictsson. After a hustling actor finds a treasure map detailing the location of ancient gold hidden near a town in the Misiones province named after the 19th-century politician Leandro N. Alem, he successfully persuades the producers to reframe the project as a portrait of the radical Alem (swapping feminist politics for anti-Eurocentric ones) and move the production there—so he can better search for the treasure. Fast-paced and hilariously self-reflexive, the film takes a playful approach to texts and history that is reminiscent of Borges.

Hopefuls / Aspirantes
Ives Rosenfeld, Brazil, 2015, DCP, 71m
Portuguese with English subtitles
Focused on the alluring promise of wealth and fame that professional soccer holds for Brazilian youth, Ives Rosenfeld’s directorial debut features a host of excellent performances from its cast. Junior (Ariclenes Barroso) ekes out a living working nights at a warehouse while playing by day in an amateur league with his talented best friend Bento (Sergio Malheiros). When Bento gets signed to a professional team, Junior struggles with his crippling jealousy—which becomes heightened by his pregnant girlfriend and alcoholic uncle. Artfully lensed and deliberately paced, the film silently builds toward a legitimately shocking climax that provides a grim reality check.

It All Started at the End / Todo comenzó por el fin
Luis Ospina, Colombia, 2015, DCP, 208m
Spanish with English subtitles
Luis Ospina (The Vampire of Poverty, Paper Tiger) turns the camera toward his radical roots—and his own intestines—for this documentary about the Cali Group, the Colombian artists’ collective that revolutionized art, cinema, and literature amid drug-related terrorism in the 1970s and ’80s. Boasting a wide array of never-before-seen archival material, Ospina (the group’s only surviving member, who was diagnosed with cancer during the making of the film) focuses on telling the stories of co-founders Andrés Caicedo and Carlos Mayolo. Never maudlin or self-important, this kaleidoscopic inside view of “Caliwood” is essential viewing for anyone looking for darkly comic, anarchic inspiration. U.S. Premiere

Ixcanul
Jayro Bustamante, Guatemala, 2015, DCP, 93m
Kaqchikel and Spanish with English subtitles
Maria (María Mercedes Coroy) is set to marry a much older foreman at the coffee plantation, but she has a crush on Pepe, who has fanciful dreams of getting rich in the U.S. After consummating their flirtation, Pepe leaves for the States—without Maria, who soon learns she is expecting a baby. A difficult pregnancy assisted only by traditional medicine finally leads her to the hectic big city, but on very grim terms. Shot in collaboration with the Kaqchikel Mayans of Guatemala’s coffee-growing highlands, Jayro Bustamante’s exquisitely shot debut feature (winner of a top prize at the Berlinale and Guatemala’s Oscar submission) explores what tradition and modernity mean for women living in marginalized communities. A Kino Lorber release.

Land and Shade / La tierra y la sombra
César Augusto Acevedo, Colombia, 2015, DCP, 94m
Spanish with English subtitles
A poetic and devastating statement on how environmental issues impact every aspect of life, César Augusto Acevedo’s Caméra d’Or–winning directorial debut is not to be missed. The elderly Alfonso (Haimer Leal) returns to the small house in Valle del Cauca he left 17 years earlier in order to care for his bedridden son Geraldo (Edison Raigosa), who suffers from a mysterious ailment related to the harsh farming techniques of the sugar-cane plantations around them. Tensions quietly simmer between Alfonso and his ex-wife (the wonderful Hilda Ruiz), but familial ties and pride keep them tied to the land in Acevedo’s meditative and painterly allegory.

Mar
Dominga Sotomayor, Chile, 2014, DCP, 70m
Spanish with English subtitles
Reminiscent of the films of Josephine Decker and Joe Swanberg, this low-key drama centers on the problems between Martin, aka Mar (Lisandro Rodríguez), and his girlfriend, Eli (Vanina Montes). On vacation in the Argentine resort town of Villa Gesell, conflicts arise concerning expectations and long-term commitments—having a baby, home ownership—but get pushed aside or elided. A visit from Martin’s gregarious, wine-guzzling mother and a random act of God threaten to push the couple to breaking point. Dominga Sotomayor matches her characters’ frustrations with the film’s expert framing, which often obscures faces and bodies, visually emphasizing their mutual misunderstanding.

A Monster with a Thousand Heads / Un monstruo de mil cabezas
Rodrigo Plá, Mexico, 2015, DCP, 74m
Spanish with English subtitles
Developed in tandem with his wife’s novel of the same title, Rodrigo Plá (The Delay, The Zone) crafts another airtight thriller, this time taking on a health-insurance system that prefers profit to adequate medical care. Refused treatment that would alleviate her terminally ill husband’s pain—yet not the frustrations of dealing with maddening bureaucracy—Sonia (Jana Raluy) snaps and, gun in hand, single-mindedly goes up the chain of command with a vengeance. The series of increasingly harrowing provocations are interspersed with moments of dark comedy, and coalesce into a final, shocking climax.