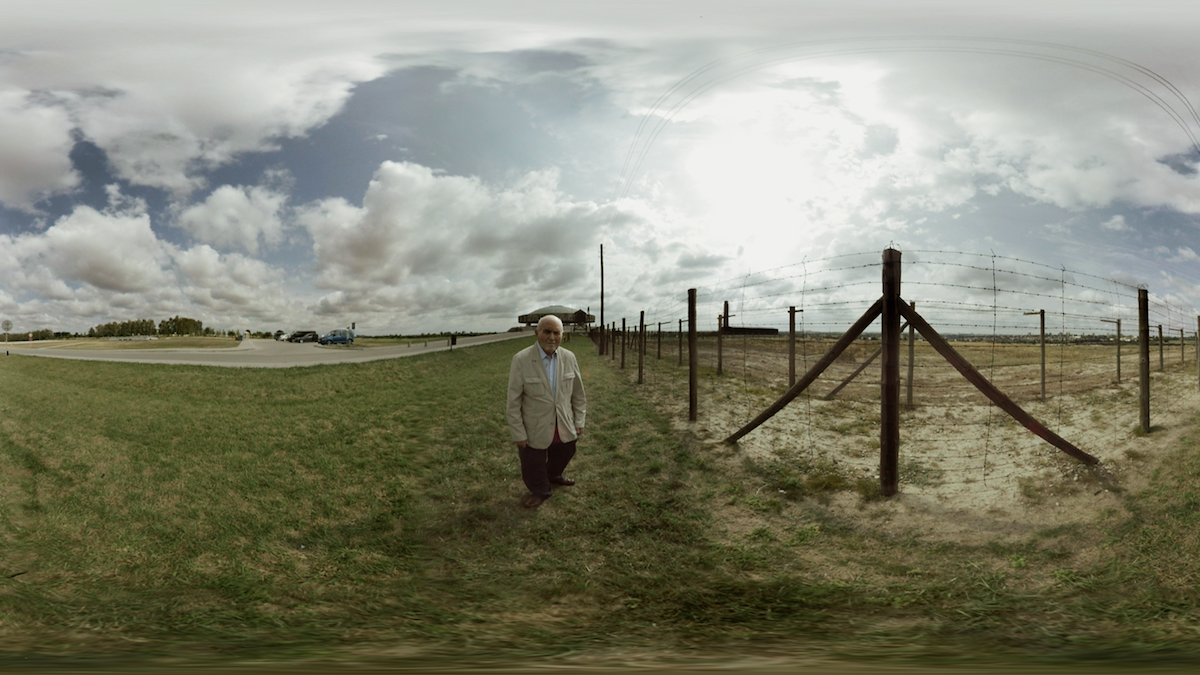 Billed as the first-ever Holocaust survivor testimony in room-scale VR, THE LAST GOODBYE will world premiere on Friday, April 21 at the 2017 Tribeca Film Festival.

In The Last Goodbye, powerful personal testimony of the Holocaust is preserved for the first time in poignant, room-scale VR, as survivor Pinchas Gutter takes audiences with him on his final visit to Majdanek, the Nazi German concentration and extermination camp where his parents and sister were murdered during World War II.

“Today when I see suffering of genocide victims and refugees, I feel their pain. I want my testimony to speak to the world to help avoid that pain. If my testimony can be a warning to the world, it would make my sharing of my own pain worthwhile,” Gutter said.

The photoreal experience presents an entirely new way of capturing truth for the future, encouraging viewers to explore the spaces depicted. USC Shoah Foundation will archive Gutter’s testimony in support of their mission to use testimony as a compelling voice for education and action.

“Just as USC Shoah Foundation forged new frontiers by collecting the world’s largest searchable archive of video testimony from genocide survivors, so too are we proud to be a part of this pioneering project with HERE BE DRAGONS, MPC VR and OTOY Inc.,” USC Shoah Foundation Executive Director, Stephen Smith said. “Every generation needs to bear witness to these atrocities, but our tools for learning and preservation change. We felt that doing the first Holocaust survivor testimony in roomscale VR, for education and preservation purposes, would engage our audience in understanding that the Nazi concentration camp system was highly developed where the SS authorities could kill targeted groups of real or perceived enemies of Nazi Germany. The consequences of such human behavior continue, and the best way to understand it and prevent it from happening again it is to gaze an unflinching eye upon it.”

In late 2016, the team traveled with Gutter to Poland to capture hours of 3D video and tens of thousands of photos on site, to create an experience that enables viewers to virtually walk with Gutter as he revisits the railway car, gas chamber, shower room and barracks of Majdanek. The groundbreaking collaboration of the industry’s top talent integrated a capture pipeline created by OTOY with HERE BE DRAGONS’ 3D video testimony, and brought to life with dozens of photogrammetry artists and engineers from MPC.

Tim Dillon, Head of VR & Immersive Content at MPC said, “Our ambition has been to create entirely an entirely new grammar for what’s possible within a narrative and room scale mix, in a documentary format. We’ve faithfully recreated the rooms of the Majdanek camp so you can inhabit them with Pinchas, you can feel his story by being there with him, eye to eye.”

“It was important that we go beyond spherical 360 video for this particular piece and allow viewers to explore Majdanek with real agency,” said Patrick Milling Smith, president and co-founder, HERE BE DRAGONS. “This freedom of movement contributes to an even more powerful sense of presence while heightening the emotional impact.”

To transport the viewers to Majdanek, the experience will be screened within a custom installation created by acclaimed scenic and production designer, David Korins.

“The ultimate goal of the experience was to build-in a contemplative pulse that people could naturally attach to their own personal landscape; to connect, not only with the atrocity of concentration camps, but grasp how inhumane man can be against man when hate is paramount and emerge as a more enlightened individual.” said Korins.