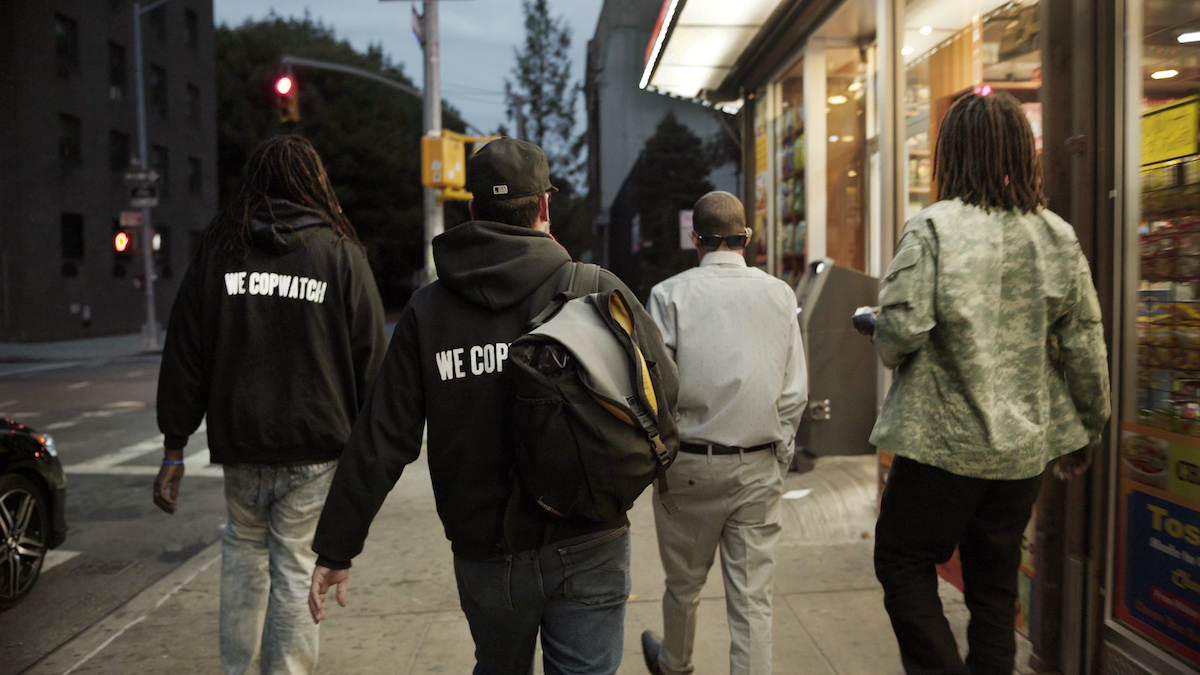 Copwatch, directed by Camilla Hall, is a true story of WeCopwatch, an organization whose mission is to film police activity as a non-violent form of protest and deterrent to police brutality.  The documentary will premiere at the 2017 Tribeca Film Festival on Sunday, April 23rd.

The Copwatch documentary profiles several WeCopwatch members – revealing how their mission to film police activity and brutality has impacted their lives. “Copwatch is not about what happened in front of the cameras, but it’s about those who stood behind them. It’s about a sense brotherhood that developed through the shared trauma of standing up to police brutality,” shares Camilla.

Some of the people featured in the documentary include:

Jacob Crawford (co-founder) who has spent the last 15 years with a camera in his hand documenting police activity.

David Whitt (co-founder) a young father who lived in Ferguson and started filming after Michael Brown’s “Hands Up” shooting.

Kevin Moore (Baltimore) awoke to the screams of his friend and neighbor Freddie Gray. He grabbed a camera and ran outside, filming as police dragged the injured young man into the back of a paddy wagon. Freddie Gray would die from the injuries and Kevin’s video, like those before his, were shown to the entire world by news broadcast and online. Like Ramsey, Kevin became a target for making his voice heard and was arrested shortly after he filmed the video while attending a protest.

Ramsey Orta who captured Eric Garner’s final words “I Can’t Breathe” on his cell phone in currently incarcerated, however we’re looking into phone opportunities for him.  Capturing Garner’s death was life changing for Ramsey, the only person from the scene of the fatal Staten Island arrest to go to jail.

The director Camilla Hall explains the inspiration for Copwatch: “The idea for COPWATCH came out of a call I had with an ex-cop some time ago. He told me how it was normal to go after people who had filmed the police, whether looking up warrants or enforcing traffic stops, anything possible to harass people who had tried to film them. I had been reading about Ramsey Orta and Kevin Moore, who had both been arrested after they filmed their videos. I tried to get in contact with Ramsey, only to be shut down by his lawyers, but refused to give up and managed to reach him through Jacob Crawford, the founder of WeCopwatch. Those initial conversations started a bigger conversation about how to tell the story of the group as a whole. I couldn’t understand why no one was telling the story behind people who film the police. I started to raise the money from friends and family to scrape through shoots with a young DP, Adriel Gonzalez. We’d borrow lavalier mics and anything we could to make sure we didn’t miss a moment. The story moved very fast but we had to keep shooting. Bow and Arrow Entertainment jumped on board and helped us to take the film to the next level.”

“In many ways, I am an unlikely director for this film, but at the time, there were no other options. I spent weeks at the start looking for others to direct but the story moved faster and faster; the story mattered more to me than the role. I had the access and, for whatever reason, the group trusted me as I was willing to go through hell to shoot what I needed to get. We were shot at on numerous occasions, spent a week without running water, and dealt with situations where we had no idea what was going to play out. In many ways, I became a confidant for each person in WeCopwatch, they opened up and revealed themselves in a way that seemed to be part of a process for them. I was drawn to them because they had allowed me to understand – for the first time – what it was like to grow up hounded and harassed by the cops because of where they’d been born or what they looked like. As a journalist, I knew that if they were communicating this to me, then others would also be able to learn from them.”