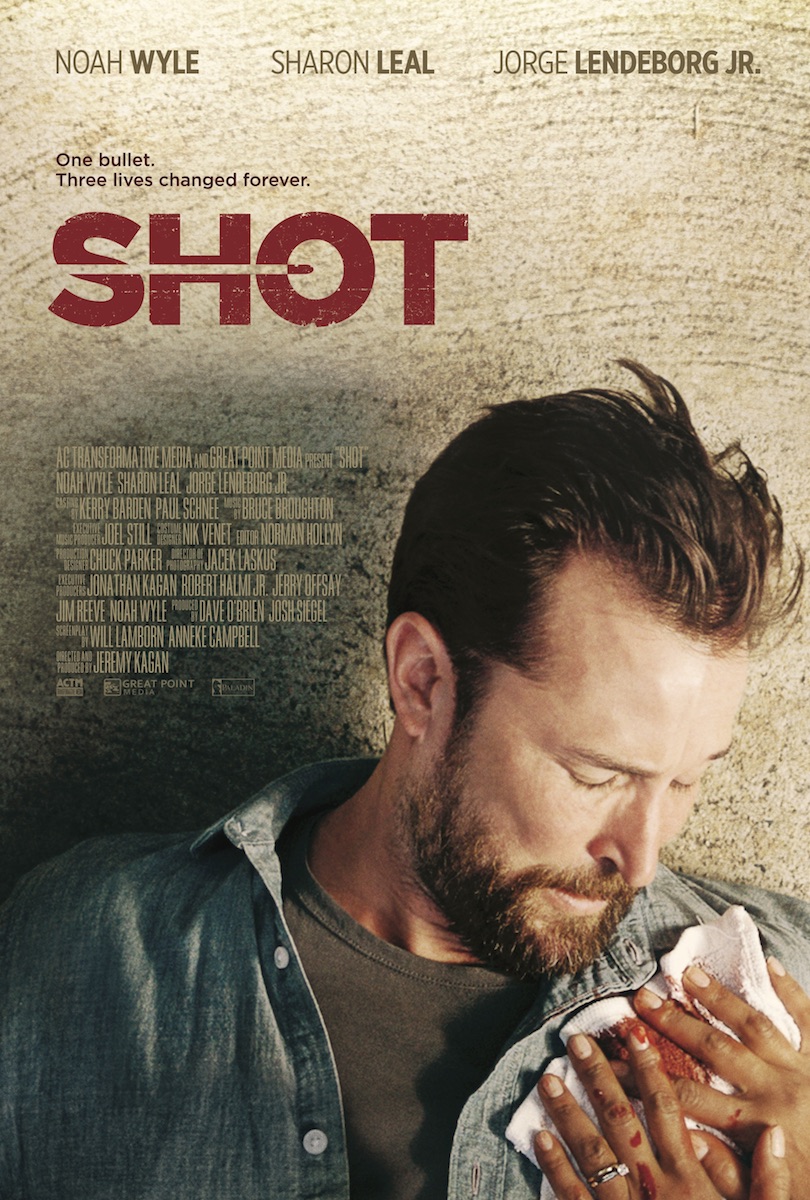 SHOT, starring Noah Wyle and Sharon Leal, and introducing newcomer Jorge Lendeborg, Jr. in his first leading role, is a gripping drama about three lives irrevocably changed when a gun is accidentally fired on a busy Los Angeles street.  The film is a visceral roller coaster ride unflinchingly exploring the consequences of gun violence in America. Directed and produced by veteran filmmaker Jeremy Paul Kagan (The Chosen, Roswell, Conspiracy), SHOT is eying a Fall release, via Paladin.

Based on an original story by Kagan and a screenplay by Anneke Campbell and Will Lamborn, SHOT begins as movie sound mixer Mark Newman (Wyle), is pumping up the volume on a bloody shootout in an action film. Hours later, after an argument with his wife Phoebe, Mark is suddenly felled by a real random bullet, and lies bleeding on the pavement with a chest wound. With Phoebe desperately trying to stop the bleeding, they both agonizingly wait for an ambulance to arrive as Mark franticly fights for his life. Meanwhile, hidden behind a fence across the street, a teenager, Miguel (Lendeborg), watches in horror with the still smoking gun in his hand that was just passed to him by his cousin. A gun that was meant to protect him against gang bullies.

From the moment the shot rings out, Kagan’s camera in real time daringly follows Mark from street, to stretcher, to gurney, to examining table, as we watch the paramedics and medical teams in full life-saving mode. We share Mark’s shock, pain, anger, fear, gallows humor, guilt, and resignation, and how this all effects his troubled relationship with his estranged wife. We experience the pain in his body from the trauma of a gunshot wound as well as the terrors in his mind via a stream-of-semi-consciousness that conveys his panic and confusion as he wonders if he will survive. Through the imaginative use of split-screen, Kagan juxtaposes Mark’s medical crisis with Miguel’s moral one, as we simultaneously see the frightened young man wrestle with the fact that an innocent man was injured – or worse – as a direct result of his actions. And, in the film’s thrilling climax, the two meet face to face. But now a gun is in Mark’s hands.

About the film Paladin president Mark Urman says, “SHOT deals with the urgent social issue of gun violence in a striking and original way. What makes it particularly effective is that it is devoid of polemics and rhetoric—no speeches are made. Rather, through action and character alone, the viewer is drawn into a situation that is emotionally moving and disturbing. Anyone concerned about the lack of sensible gun control in our society, will want to see this film, and will tell others to see it as well.”

For Kagan: “This has been a passion project for me.I wanted to make a film where we get intimately involved in what happens when someone gets shot. I want us to care about these people and I didn’t want us to turn away, like we get to do with most movie violence. This isn’t about ‘no guns,’ it is about responsible living. It’s about sanity and gun safety to prevent the staggering loss of lives. They say you save a world when you save a life. Wouldn’t it be amazing if this movie could save a life!”

A key component to Paladin’s marketing campaign will be coordinated audience-engagement activity with wide array of gun control advocacy groups, organizations, and activists, both national and regional. John Raatz, an associate producer on SHOT, who coordinated grass roots outreach on Paladin’s highly successful release of Tom Shadyac’s “I AM,” will once again be spearheading this initiative.

SHOT is directed by Jeremy Kagan and written by Anneke Campbell and Will Lamborn, based on a story by Kagan. The film stars Noah Wyle, Sharon Leal, and Jorge Lendenborg Jr. Producers are Jeremy Kagan, Dave O’Brien, and Josh Siegel. Cinematography by Jacek Laskus, editing by Norman Hollyn, and original music by Bruce Broughton.