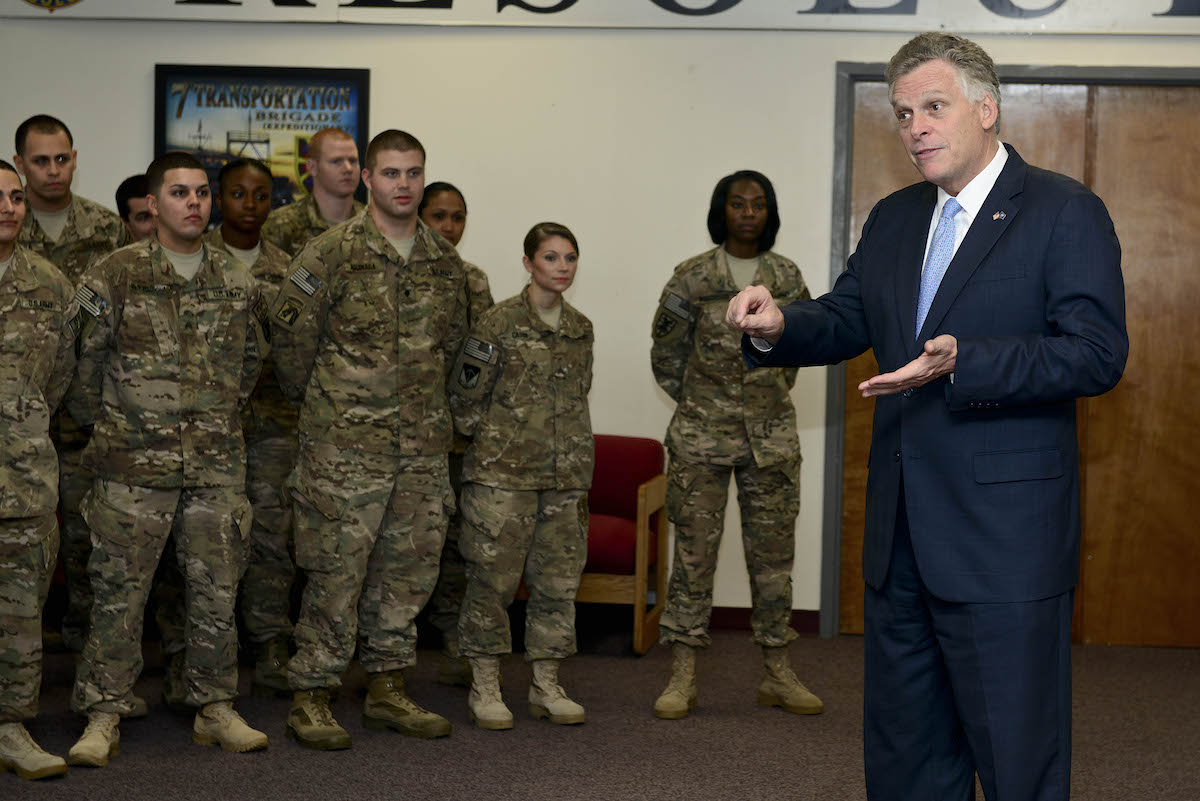 Each year Richmond International Film Festival honors state and national leaders who are paving a future path in leadership and evoking inspiring change in our communities. This year the festival’s Pioneer Award for Excellence in Public Service & Leadership will be awarded to Governor Terry McAuliffe for his extraordinary work in public service, national leadership, and in successfully ending veteran’s homelessness in Virginia as he promised and helping get them into programs that create new purpose upon transitioning to civilian life. The Pioneer Award will be presented to Governor Terry McAuliffe by Governor Ralph Northam during RIFF”s Sunday, April 29 Military Spotlight at 2:30pm.

The Military Spotlight will feature a screening of Thank You For Your Service, a groundbreaking feature documentary that investigates the failed mental health policies within the US military and the deadly consequences to the troops. The film will screen Sunday, April 29 at 2:30pm at the Byrd Theatre, and will be followed by the Pioneer Award presentation and an extensive Q&A with filmmaker, Tom Donahue & leading experts Carrie Ann Alford (Director of Policy and Planning, Virginia Department of Veterans Services, William Rodriguez MSW (Founder at Torii Coaching and Consulting), and Brian Meyer (Clinical Psychologist and Post-Traumatic Stress Disorder/Substance Use Disorders Specialist at the H.H. McGuire Veterans Administration Medical Center).

RIFF will bring another special guest to the festival, Rene Balcer, a top influencer in television and film who will present his feature documentary, Above the Drowning Sea with co-executive Producer, Carolyn & Hsu Balcer. The film is a documentary about WWII and Austrian immigrants who fled to Shanghai to escape Hitler and the Nazis and narrated by Julianna Margulies, Tony Goldwyn, and Nick Mancuso. It will screen Thursday, April 26th at 8pm at the Byrd Theatre with an extensive Q&A to follow. Rene Balcer is a co-Creator, writer, and executive producer of Law & Order.

Image: Terry McAuliffe, Virginia governor, meets with Soldiers during a visit to Fort Eustis, Va., Dec. 2, 2014. During his visit, McAuliffe asked the Soldiers questions about their military experiences, and thanked them for their service. (U.S. Air Force photo by Senior Airman Kimberly Nagle/Released)

Above The Drowning Sea THANK YOU FOR YOUR SERVICE