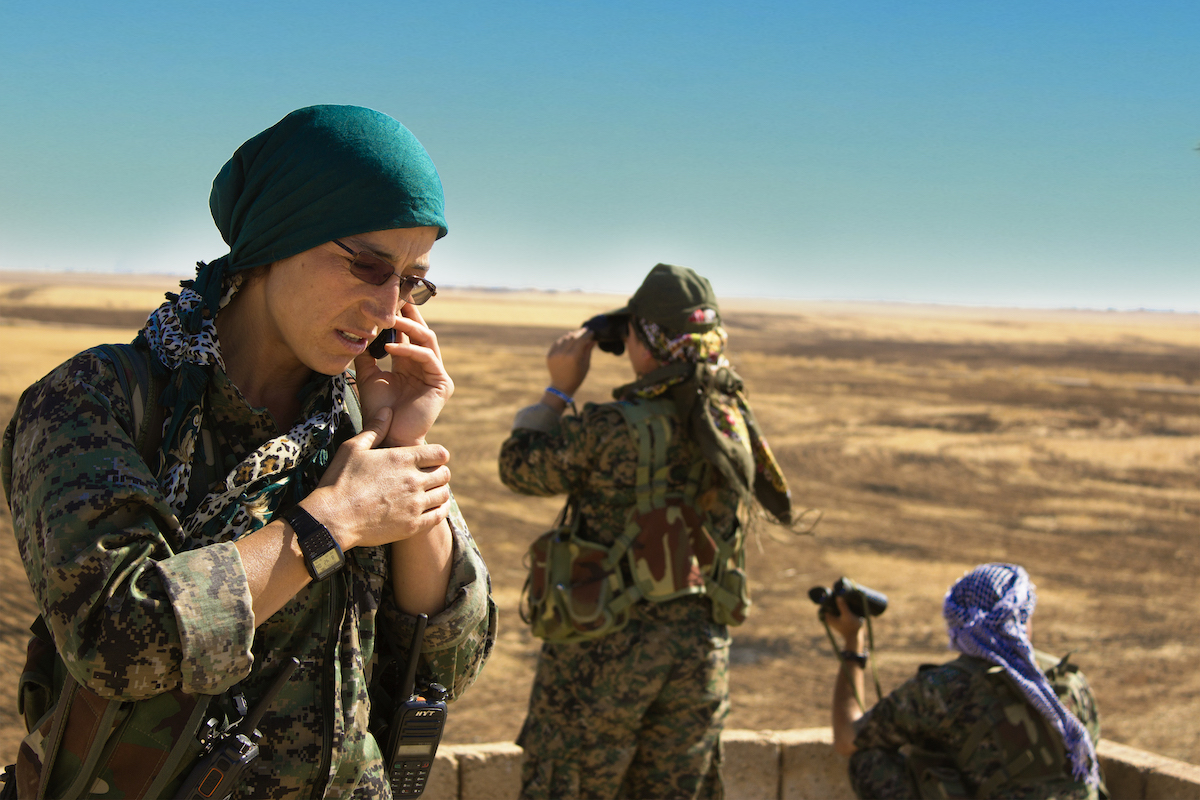 When we meet Arian, a 30-year-old commander of the YPJ, the Kurdish-Syrian Women’s Protection Unit, she is struggling to recover from multiple ISIS sniper wounds. But her greatest worry is to be sent home. “If I live an ordinary life, I will be scared of death,” she says.

The words reflect the dual motivations that inspired Kurdish women to literally take arms against the Islamic State of Iraq and Syria as it gobbled territory and slaughtered villagers in their homeland. She and her all-female comrades know the stakes involved in stopping the ultra-fundamentalist insurgency from overrunning them.

“To them, a piece of fabric is worth more than a woman,” Arian says angrily in an earlier interview from the battlefield. “To end their threat to women, we will fight them until there is no one left.”

But Alba Sotorra’s riveting documentary Commander Arian – A Story of Women, War and Freedom, is about more than the threat in front of these women. It’s about their camaraderie. And it’s about what they left behind that they would like to see change in the face of a victory over the Islamic extremists.

The documentary jumps regularly between the post-recovery Arian – who wants nothing more than to get back in battle – and the YPJ fighters as they make village-by-village progress to the occupied Syrian city of Kobane, “the heart of Kurdistan.” We witness Arian in her role as a de facto life coach toward fellow soldiers who have left a life where they were only expected to be wives and mothers. “What kind of woman do you want to be?” she repeatedly asks those under her command.

As a fellow fighter named Nupelda offers in advance of the next fire-fight, “Here, there is a goal, to enrich my thoughts and be free.” There is tragedy along with the high ideals. Some of the women we meet en route to Kobane will be injured and killed. But the push forward continues, along with the dreams for a better life than before.

“When the war in Syria broke out, Kurdish women took arms against Daesh (ISIS),” director Sotorra says. “Having followed the news about the atrocities committed in the region, especially against women, I thought it was incredible that a female force was emerging as the fiercest power against these monsters.”

When the YPJ was taking back Kobane and repelling attacks, Sotorra undertook a risky filmmaking mission via contacts in Turkey, arriving in time to see a city in ruins and without power. “I decided to travel to Kobane and meet the women who had led that battle. I wanted to share their feminist struggle and, as a woman filmmaker, it almost felt like my duty to document it.

“It was an adventure. I had no idea what I was getting into. Sometimes I think if I had been aware of all the things I would experience, I wouldn’t have had the courage to go. But ignorance is bliss and this is a story about courage.”

Commander Arian – A Story of Women War and Freedom

First Look at 'SAY HER NAME: The Life and Death of Sandra Bland' Documentary Premiering At Tribeca Film Festival [VIDEO]