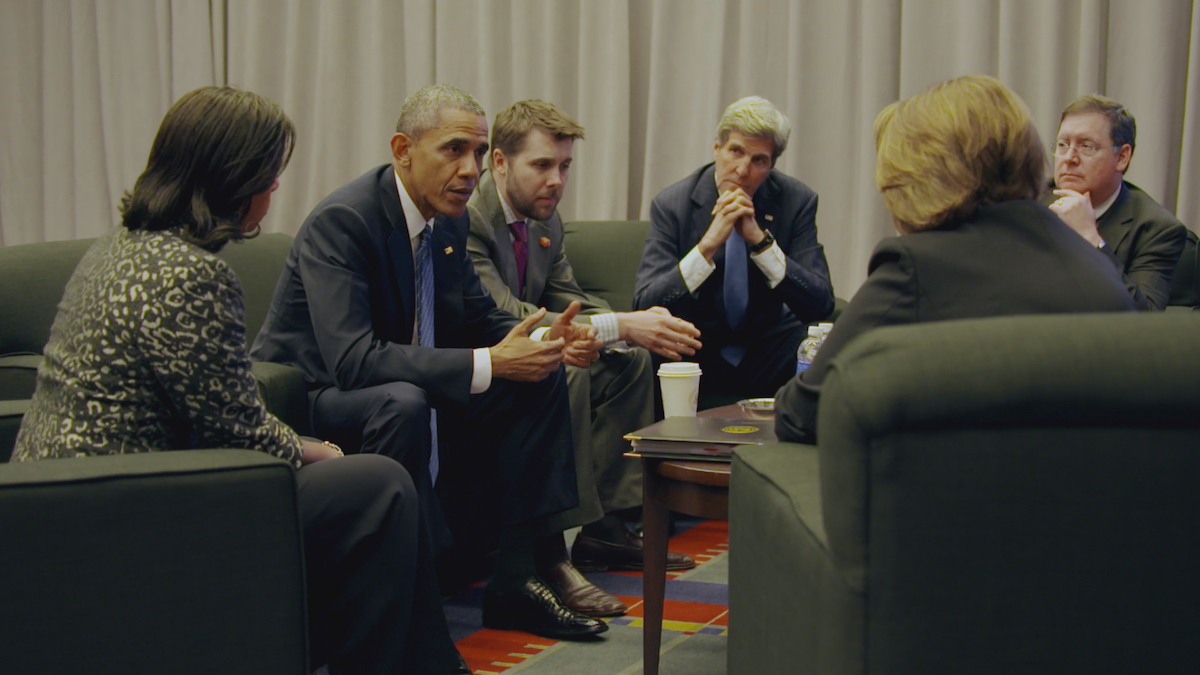 During his last year in office, President Obama’s foreign-policy team worked to solidify the administration’s policies amidst immense challenges. The Final Year offers an insider’s look at key figures, including Secretary of State John Kerry, UN Ambassador Samantha Power, Deputy National Security Advisor Ben Rhodes and National Security Advisor Susan Rice, as they sought to promote diplomacy and redefine how the U.S. confronts questions of war and peace, all while preparing to hand over the machinery of American power to a new administration.

Directed by Greg Barker (HBO’s Emmy(R)-winning “Manhunt: The Inside Story of the Hunt for Bin Laden”), the revealing behind-the-scenes documentary debuts Monday, May 21 (8:00-9:30 p.m. ET/PT), on HBO.

The film will also be available on HBO On Demand, HBO NOW, HBO GO and partners’ streaming platforms.

Shooting from late 2015 until 3:00 a.m. on the morning of Inauguration Day, Jan. 20, 2017, director Greg Barker and his crew filmed extensively in the White House, the State Department and the United Nations, following their subjects to 21 countries, among them Austria, Cameroon, Chad, Cuba, Germany, Greece, Greenland, Japan, Laos, Myanmar, Nigeria, the UK and Vietnam.

Among the events chronicled in The Final Year:

Secretary of State Kerry is in Vienna for the Iran Nuclear Deal, which he calls “as serious a moment in diplomacy as you can get.” Meanwhile, the president is in Vietnam, where he holds a forum for young people. Advisor Ben Rhodes is focused on writing President Obama’s unprecedented upcoming speech in Japan to mark the 71st anniversary of the Hiroshima bombing.

In Vienna, Secretary Kerry attends more than 30 meetings on the situation in Syria over two days, while UN Ambassador Power sits down with Syrian refugees to hear their heartrending stories. While Kerry and Power try to broker peace for Syria, Advisor Rhodes is in Havana, where he reflects on the newly open relationship between the U.S. and Cuba, saying, “If these two countries can try to put the past behind them, maybe we all can do that.”

In Laos prior to a presidential visit, Advisor Rhodes notes that the rhetoric of the presidential campaign is worrying people around the world. In the U.S., Ambassador Power speaks at the citizenship ceremony for her babysitter, Maria, noting emotionally that she is an immigrant herself. Next, she visits high security-risk areas in Cameroon, Chad and Nigeria to help bring attention to the hundreds of girls kidnapped by Boko Haram, who have not been found after two years.

After becoming the first U.S. president to visit Laos, site of the 1964-1973 “secret war” that still claims victims from unexploded bombs, President Obama and his team prepare for UN General Assembly meetings in New York. With the situation in Syria front and center, there are heated arguments for and against military intervention, but National Security Advisor Rice points out that disagreement is important, noting, “You don’t want groupthink around a table.”

On election night 2016, Ambassador Power hosts a gathering with Madeleine Albright, Gloria Steinem and female UN ambassadors, but the mood is dampened when it becomes clear Hillary Clinton won’t be the next president. Although his successor will likely reverse his policies, President Obama, visiting Athens on his final trip as head of state, is hopeful. “History doesn’t follow a straight line,” he says. “It zigs and zags.” In the days before Donald Trump’s inauguration, Kerry, Rhodes and Power pack up their offices. Vowing to continue their work, Power says, “We’re in this for the long haul.”

The Final Year, which had its world premiere at the 2017 Toronto International Film Festival, was hailed as “compelling… irresistible… deeply moving” by the Hollywood Reporter, while the Wrap called it “immense and intimate.”

In addition to the Emmy(R)-winning “Manhunt: The Inside Story of the Hunt for Bin Laden,” director Greg Barker’s HBO credits include “Homegrown: The Counter-Terror Dilemma,” “Koran by Heart” and the Emmy(R)-nominated “Sergio.”