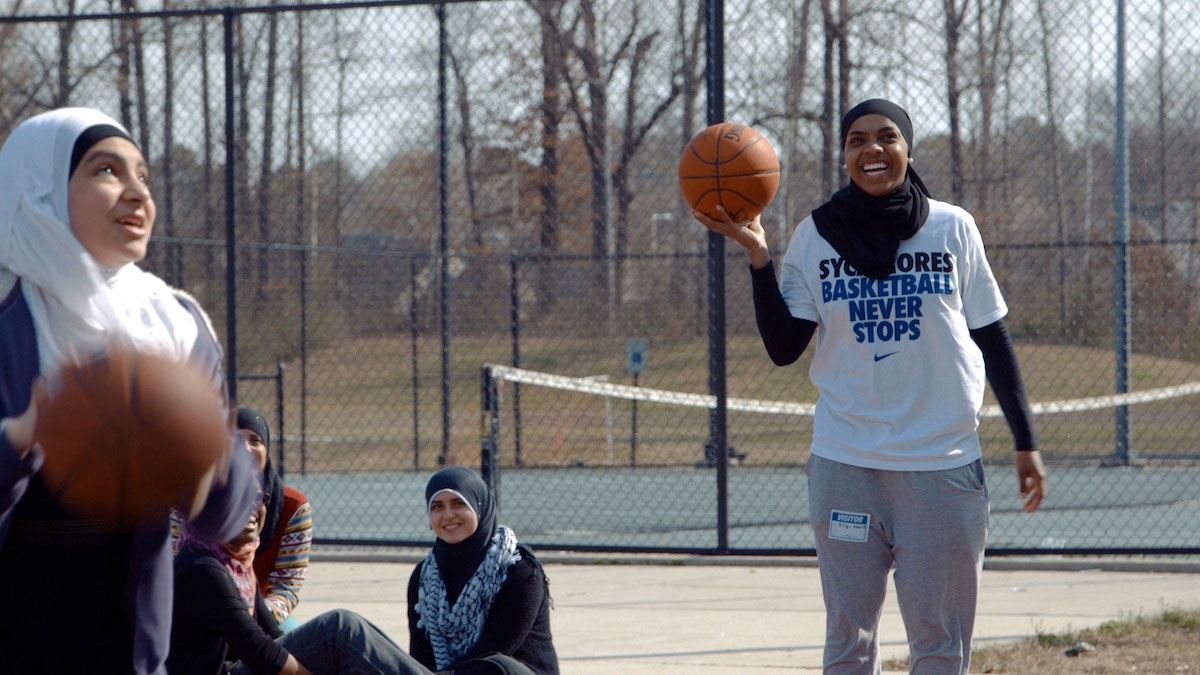 Life Without Basketball is an intimate and revealing look at the life and career of Bliqis Abdul-Qaadir, a 5’2 pioneering, powerhouse basketball player from Springfield Massachusetts, who broke records and barriers on her way to becoming the first Division I basketball player to play wearing a hijab. When a controversial FIBA (International Basketball Federation) uniform rule ends her chances of playing professionally, she must reexamine her faith and identity as a Muslim-American.

Life Without Basketball documentary, presented by Pixela Pictura and directed by Tim O’Donnell and Jon Mercer, will have its World Premiere at DOC NYC, America’s Largest Documentary Festival, on Saturday, Nov 10, 2018.

Bilqis Abdul-Qaadir’s story began in Springfield, Massachusetts, the birthplace of basketball. Bilqis excelled as an honor student and on the basketball court from an early age. In January 2009, while a senior at New Leadership Charter School, she shattered the Massachusetts state scoring record (male or female) that was previously held by female hoops legend Rebecca Lobo, averaging over 40 points a game, and finishing with 3,070 career points.

Following her record-breaking high school career, Bilqis received a scholarship to play for the University of Memphis. She appeared in Sports Illustrated and on ESPN, was named the 2008-09 Gatorade Massachusetts Basketball Player of the Year, and was invited to the White House for a Ramadan dinner with President Barack Obama. In 2011, Bilqis was awarded the United States Basketball Writers Association “Most Courageous” award at the NCAA Women’s Final Four for being recognized as the first Muslim-American woman to play covered in NCAA history. After completing her final year of NCAA eligibility at Indiana State University, Bilqis began preparing to play internationally. When her agent discovered a little-known FIBA uniform rule which prohibited players from wearing religious head coverings, such as hijabs, turbans, and yarmulkes on the court, her professional career was abruptly halted. Unwilling to stray from her religious beliefs, Bilqis prepared for the toughest challenge of her life.

Life Without Basketball is an essential American story about hope and courage, and an exploration of identity and consequence. The film examines the personal impact of Bilqis’s encounter with this career ending rule and the complex world of being Muslim in America, where family tradition and popular perception are often at odds. Through persistent advocacy and dedication to youth empowerment, Bilqis’s story engages viewers in a new conversation about social and political dynamics at home and abroad.

Co-director Tim O’Donnell says “As a former Springfield (MA) high school art teacher and wrestling coach, I first heard about Bilqis’s story from a former student who played basketball with her. I was struck by the discriminatory nature of the FIBA rule, I teamed up with co-director Jon Mercer and we started filming right away, as Bilqis began her fight for the right to play. What originally was thought of as short production quickly turned into four years as the filmmakers were fully welcomed into Bilqis’s family and their private lives. Life Without Basketball continues Pixela Pictura’s mission of working within marginalized communities to share stories of overcoming personal challenge or conflict…”

Life Without Basketball will have its World Premiere at DOC NYC, America’s Largest Documentary Festival on the following date/times:
Saturday, November 10th at 5pm. Cinepolis Cinema

Life Without Basketball won best pitch at the 2015 DOC NYC, and materials were adapted into FIBA Allow Hijab, a short documentary co-created with Jon Mercer and distributed through CNN Films and UNINTERRUPTED. His Boston based company Pixela Pictura is currently in post-production on Finding My Dad’s Memories, a personal documentary filmed during his father’s recovery from a traumatic brain injury. His past work includes The Last Time I Heard True Silence and For The Love of Dogs. Tim was a former high school art teacher and wrestling coach.