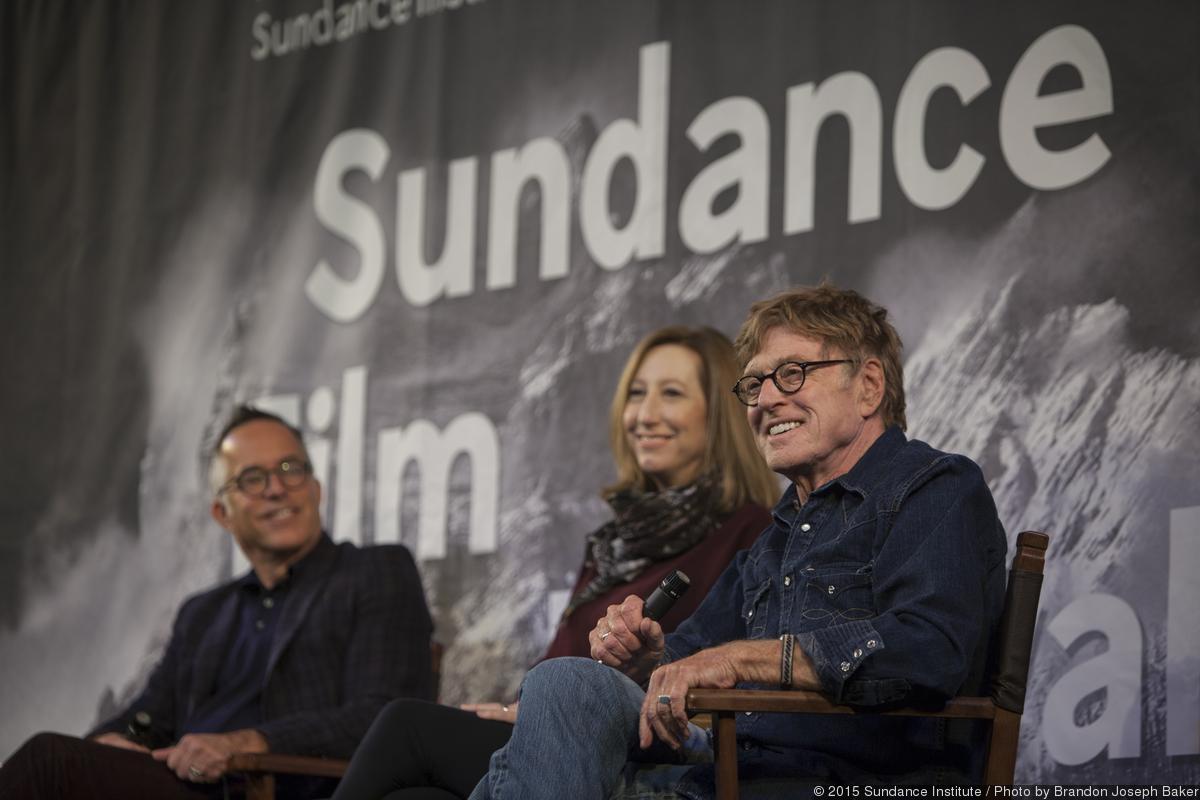 Thirty-three nonfiction works from seventeen countries comprise the latest Sundance Institute Documentary Fund and Stories of Change Grantees. 81% of the supported projects have at least one woman producer or director; 48% originate from outside the US.

That support takes the form of grants to films in the development, production, post-production and audience engagement stages, and includes custom grants from The Kendeda Fund, which provides specific support for projects addressing environmental themes or the challenges of gun violence; John D. and Catherine T. MacArthur Foundation, which provides specific support for journalistic projects, prioritizing diverse, Native and Indigenous voices; and the Stories of Change Fund, a creative partnership with the Skoll Foundation, which supports social entrepreneurs and independent storytellers. This slate of Institute grantees join those supported by Science Sandbox, a collaboration with the Simons Foundation, and the Art of Nonfiction Fellowship and Fund, announced last month.

“From renowned Argentinian director Lucrecia Martel addressing the legacy of 500 years of colonial history in her first feature documentary, to first-time Chinese director Runze Yu exploring a profoundly intimate domestic space, these are the vivid individual threads that form the narrative tapestry of our culture and we are proud to support them.” said Tabitha Jackson, the Documentary Film Program’s Director.

“These wildly diverse projects from around the globe encompass a staggering scope of subjects,” said Hajnal Molnar-Szakacs, the Documentary Fund’s Director. “We are thrilled that our grants and tailored support opportunities can play a catalytic role across the lives of these projects, from developing creative languages to securing additional funding and finally launching the films on the world stage.”

Sundance Institute has a long history and firm commitment to championing the most distinctive nonfiction films from around the world. Recently-supported films include Shirkers, Hale County This Morning, This Evening; Minding the Gap; The Silence of Others; I Am Not Your Negro; Last Men in Aleppo; Casting JonBenet; Strong Island; Hooligan Sparrow.

Chocobar (Argentina / US)
Dir. Lucrecia Martel
Prod. Benjamin Domenech, Joslyn Barnes, Santiago Gallelli, Matías Roveda
Javier Chocobar was shot dead fighting the removal of his indigenous community from their ancestral land in Argentina. His death appeared in a video on YouTube. This film unravels the 500 years of “reason” that led to this shooting, both with a gun and a camera, and contextualizes it in the system of land tenure that emerged across Latin America.

Cowboy Love (Argentina / Mexico)
Dir. Manuel Abramovich
Prod. Manuel Abramovich
A gay cowboy community in Mexico reinvents the classical heteronormative cowboy figure. Like a documentary remake of ‘Brokeback Mountain’ with the tone of Mexican telenovela, ‘Amor vaquero’ is the movie these cowboys always wanted but never had: the one about their own love stories.

Democrats II (Denmark)
Dir. Camilla Nielsson
Prod. Signe Byrge Sørensen
Zimbabwe is at a crossroads. The new leader of the opposition party, MDC, Nelson Chamisa, challenges the old guard, ZANU-PF, represented by the acting president Emmerson Mnangagwa, also known as ‘the crocodile’. The election is the ultimate test for both the party in power and of the opposition. How do they interpret the principles of democracy in a post-Mugabe era – in discourse and in practice?

Gabi (Sweden)
Dir. Engeli Broberg
Prod. Anna J. Ljungmark and Jacob Eklund
Gabi just wants to be Gabi. A simple wish one would think, but as it turns out, it is not. Showing the perspective of a child that refuses to be put in a box, we follow Gabi from age eight to thirteen, struggling to find a place in a society dictated by adult rules and gender categorizations.

Mayor (US)
Dir. David Osit
Prod. David Osit
With startling and unprecedented access, Mayor follows a charismatic leader’s quixotic quest to build the city of the future in a land paralyzed by its past.

My Mom and My Little Secret (China)
Dir. Runze Yu
Prod. Runze Yu
This film is an intimate portrait of the relationship between the closeted filmmaker himself and his estranged mother. In a fast-changing society like China, where traditional values collide with the new ones. Will revealing the secret bring the family together or rip it apart?

Alabamaland (US)
Dir. April Dobbins
Prod. April Dobbins, Moira Griffin, Trevite Willis
Jones Farm is a lush, 688-acre farm situated in the heart of western Alabama. Three generations of black women explore their very different ties to this place that shaped them and continues to exert a strange hold on their identities. This is the same plot of land that their ancestors once worked as slaves—a history that is important to their identities and to how they navigate the world.

Aleph (US / Croatia)
Dir. Iva Radivojevic
Prod. Madeleine Molyneaux, Vilka Alfier, Iva Radivojevic
Aleph is a mysterious portal that contains the entire universe. The portal is hidden in a splintered labyrinth of magic and meaning and encompasses the thoughts, ideas and dreams of ten protagonists in ten countries, spanning five continents. These collective stories serve as pieces of a puzzle that lead to what the writer Jorge Luis Borges called “the unimaginable universe.”

The Fight (Bolivia & Australia)
Dir. Violeta Ayala
Prod. Redelia Shaw, Daniel Fallshaw, Fernando Barbosa, Andrea Monasterios
People with disabilities are amongst the most discriminated in Bolivia, with the majority living in dire poverty. Fed up with being ignored, a group of them decide to take their fight to the streets; Feliza and her husband Marcelo lead the way, as the protest grows into a movement. They embark on an unimaginable journey, marching 260 miles over the Andean mountains in their wheelchairs to go toe-to-toe with the Bolivian government.

Heaven Through the Backdoor (US)
Dir. Anna Fitch and Banker White
Prod. Sara Dosa
Heaven Through the Backdoor is a multi-platform documentary that explores identity, judgement and family bonds through the experience of Swiss émigré Yo (Yolanda Shae), a fiercely independent 88-year old woman who we meet as she prepares for her next great adventure: death. The project juxtaposes cinematic interpretations of Yo’s stories using intricately built sets and miniatures,with raw, intimate documentary footage her present life.

Just a Band (Kenya / Canada)
Dir. Anjali Nayar, Wanuri Kahiu
Prod. Katie Doering, Senain Kheshgi
Just a Band is a story about four nerdy Nairobians, who drop out of university and form an Afro-electric pop band, a counter narrative to the lives expected of them by their middle-class families. Playing on popular band movie tropes (the story of every great band that’s ever broken up), while borrowing from a post-modern cultural mishmash of Sun Ra, Kung Fu Movies, Hip Hop and a thousand other bits of detritus, the film Just a Band presents a fresh coming-of-age story in the midst of the post-dictatorship art renaissance in Kenya.

Outta The Muck (US)
Dir. Ira McKinley & Bhawin Suchak
Prod. Tracy Rector, Bhawin Suchak, Ira McKinley, Sam Pollard
Family, football, and the forgotten history of the Deep South come to life in this intimate portrait of generational struggle and resilience in Pahokee, Florida. Outta The Muck tells a story about the power of community, the echoes of trauma, and the strength of Black families in rural America.

Softie (Kenya)
Dir. Sam Soko
Prd. Toni Kamau and Sam Soko
A young idealistic Kenyan challenges the status quo, facing questions on the cost of sacrifices made, past and present.

Through the Night (US)
Dir. Loira Limbal
Prod. Loira Limbal
To make ends meet, Americans are working longer hours across multiple jobs. This modern reality of non-stop work has resulted in an unexpected phenomenon: the flourishing of 24-hour daycare centers. Through the Night is a vérité documentary that explores the personal cost of our modern economy through the stories two working mothers and a childcare provider – whose lives intersect at a 24-hour daycare center.

The Last Out (US)
Dir. Sami Khan and Michael Gassert
Prod. Michael Gassert, Jonathan Miller, Sami Khan
Three young Cuban baseball players are pushed to their limits as they flee their homeland, leaving their families and everything they’ve ever known behind, to chase their dreams of playing in the Major Leagues.

The Letter (Kenya)
Dir. Maia Lekow and Chris King
Prod. Maia Lekow and Chris King
In coastal Kenya, a frenzied mix of consumerism & christianity is turning hundreds of families against their elders, branding them as witches as a means to steal their land. Filmed with a gentle pace and incredible closeness, The Letter is an intimate family portrait that weaves a complex story of shakespearean proportions.

Harvest Season (US)
Dir. Bernardo Ruiz
Prod. Bernardo Ruiz and Lauren Capps Rosenfeld
Like studio musicians or backup singers, the behind-the-scenes players in the premium California wine industry are essential, yet rarely recognized for their efforts or contributions. Following three people whose lives and livelihoods are intimately tied to winemaking in the Napa and Sonoma Valleys, Harvest Season delves into the “backstage” action over the course of one dramatic grape harvest and during a period of of rapid change for the California wine industry.

Inventing Tomorrow (US)
Dir. Laura Nix
Prod. Diane Becker, Melanie Miller, Laura Nix
Meet passionate teenage innovators from around the globe who are creating cutting-edge solutions to confront the world’s environmental threats – found right in their own backyards – while navigating the doubts and insecurities that mark adolescence. Take a journey with these inspiring teens as they prepare their projects for the largest convening of high school scientists in the world, the Intel International Science and Engineering Fair (ISEF), a program of the Society for Science & the Public.

And She Could Be Next (US)
Dir. Grace Lee, Marjan Safinia, Yoruba Richen, Amber Fares, Deb Esquenazi, Geeta Gandbhir. Anayansi Prado, Ramona Emerson
Prod. Grace Lee, Marjan Safinia, Jyoti Sarda
In a polarized America, where the dual forces of white supremacy and patriarchy threaten to further erode democracy, women of color are claiming power by running for political office. And She Could be Next, made by a team of women filmmakers of color, asks whether democracy itself can be preserved — and made stronger — by those most marginalized.

Stories of Change Fund
A creative partnership with the Skoll Foundation, which supports social entrepreneurs and independent storytellers.

Untitled Water Inequality in Kenya Project (Kenya), scripted short
Dir. Judy Kibinge
Prod. Emily Wanja
A young women working as a house help in a middle class home in Kenya discovers that her affluent employers are paying less for water than she and her community do. She soon discovers the source of the problem is far closer to home.

First Time Stories (India), feature documentary
Directors: Shirley Abraham, Amit Madheshiya
Deep inside the Amazon, rainforests flourish untouched from horizon to horizon, guarded by mountains never climbed, and cut by rivers unmapped. And yet, they have all been claimed by stories told by elders around a fire. Keepers of the oral storytelling tradition in Suriname for 300 years, frail Matawai elders seek to pass them to the young, who are lured away by gold mining, far from the secrets of the forest.

Mystery of Epilogue (Denmark/Syria), feature documentary
Dir. Feras Fayyad
Prod. Kirstine Barfod
In the chaotic war-torn world of Syria, three lawyers and judges attempt to re-establish the rule of law amid the collapse of the justice in the ongoing civil war.

Untitled Government Technology Project (US)
Prod. Kate Osborn, Josh Penn, Elizabeth Lodge Stepp
A comprehensive look at our nation’s contemporary infrastructure that matters most: technology. Examining how government works in this digital age, largely at the expense of the American people.

The Widow Champion (US), short documentary
Dir. Heather Courtney
Evicted from their land and homes by their in-laws, widows in Kenya are forced to live destitute with their children in empty market stalls, or even under trees out in the open. But now these women are coming together to fight for what is rightfully theirs — their land, their homes and their lives.