Directed by Conrad Jackson, Falling Overnight is those rarest of indie gems- genuinely heart-felt and a pleasure to watch. Young photographer Chloe (Emilia Zoryan) and skinny, appealing Elliot (Parker Croft) meet uber- cute in a café in LA, the audience having learned only moments before that he is scheduling a rather profound surgery for the very next day, without the help or support of any noticeable friends, or family, around him. We are immediately drawn in…

Elliot is young, but one of those rare early 20-somethings- he appears to be completely financially independent, somewhat of an internet start-up wunderkind who wisely cashed out early. Not one to dwell, or feel sorry for himself,  Elliot spontaneously decides to go to Chloe’s art show, where she has casually invited him along. After an awkward start, with Chloe having to actively let him know, more than once, that she is in fact interested in hanging out with him, their big evening begins…

Like another pretty, self-aware couple I remember from another sweet micro-budget gem filmed in Los Angeles, Chad Hartigan’s Luke and Brie Are On a First Date, their chemistry and attraction is almost unbearably awkward, cloying, reticent, adorable, all at once, and finally, truly undeniable.

I simply cannot think of a more instantly reflective little film that makes one really wonder not what they should be doing with their lives, but what they really want to be doing, at this very moment in time. “I always wanted to go Spain…” Elliot gently weeps, near the end of the film. We wish the both of them the happiest of futures together, if possible- while- at the same time, longing for the very same promise ourselves.

The two leads are, quite simply terrific, in performances that are highly naturalistic yet minimal in the nicest of ways. VIMOOZ had the pleasure of catching up with one of Falling Overnight’s lovely stars, Emilia Zoryan, who has a preternatural self-possession on screen that manages to be innocent, knowing and sultry at the same time. She isabsolutely someone to watch. Here, she tells us here about filmingFalling Overnight, the director’s process, and how she came to be cast: 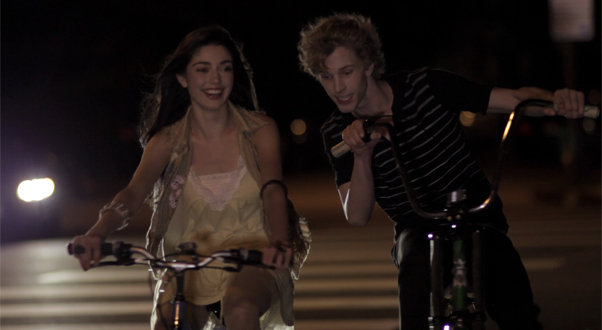 Vimooz: You were so wonderful in Falling Overnight! How did you first get involved with the film?

Emilia Zoryan: Thank you very much! The audition process was very competitive, actually. Everything was riding on my performances in those rooms. Funny thing was, there was an error, and I didn’t get my sides until 10 minutes before I went in that first time! Thankfully, I memorize lines very quickly. Each time going in, I became aware of the fact that the stakes got higher and higher. Luckily, my final audition stole the role. I am told now that I was the “dark horse.” I like that. But honestly, I feel fate got me involved in this film.

Vimooz: Your performance is incredibly natural. How long have you been acting?

Emilia: I have been acting ever since Falling Overnight, so, a bit over two years now. I was studying Economics at UCLA while filmingFalling Overnight. I realized how miserable I was at University. Now that I have graduated, I will seriously pursue a career in acting. I have modeled, acted in commercials, and danced most of my life, but acting in film is a totally different animal.

Vimooz: Did Conrad let you and Parker improvise a lot? Parker Croft, your co-star, co-wrote the script, is that right?

Emilia: Parker, Aaron, and Conrad wrote the script and laid a very firm foundation for the film as a whole. I was given the freedom to change things or add to their work. Sometimes, Parker would play with his lines and I would follow his lead. The only improvised scene is probably the dialogue for the biking scene.

Vimooz: How did the director (Conrad Jackson) rehearse with both of you?

Emilia: We took the rehearsals scene by scene, tackling the heavy stuff early on. Conrad would tape rehearsals to see what worked, and what didn’t. I loved that he would whisper directions in our ears so the other wouldn’t see what change was coming. Filming out of chronological order is very difficult, but rehearsals allowed me to learn the arc of my character to the point where I understood where Chloe was, emotionally, every time in every separate moment. Rehearsals were also where I got to know the gang, and we messed around a lot and bonded. It was hard work, but also, a very exciting time in my life.

Vimooz: The subject matter is extremely heavy, yet is handled with such a wonderful lightness and truth. The ending of the film is particularly poignant. Can you can encapsulate what the entire experience felt like, briefly, for us?

Emilia: I knew I had to “approach with caution” from the very beginning, because it was immediately evident that this story, this subject matter in general, was very sensitive for the filmmakers. I have seen loss all around me, but thankfully have never experienced losing a close one. So I really had to figure out how to put myself in the mind of a girl who is a free spirit, but, simultaneously, wants to protect her heart from loss. At the time, I had never been in an acting class, so I invented my own method of acting. Later, I studied film theory at UCLA, and discovered that the method I thought I came up with on my own had already existed and that “The Magic If,” and “Substitution” were tools that were very popular. Imagine how hard I laughed at myself!

Vimooz: Tell us about some of your favorite films, and who you would like to work with next….?

Emilia: My favorite performance in film is, without a doubt, Sean Penn’s in She’s So Lovely. Robin Wright was phenomenal in that film, as well. I am a big fan Darren Aronofsky’s work: Black Swan,Requiem for a Dream, and The Fountain. It would be an honor to work with him. The Fountain is one of my favorite films showing death in a new light- “Death frees every soul.”

I think that is a beautiful idea.

Pllease check out Falling Overnight, opening today, July 27th, in NYC at Cinema Village West. Vimooz recommends you grab a friend and GO. This film will seriously lift your heart…