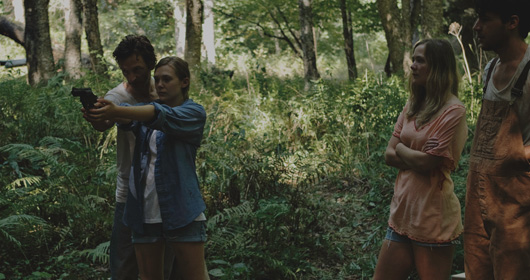 Haunted by painful memories and suffering from increasing anxiety, Martha escapes an abusive cult and returns home to live with her older sister, Lucy, and Lucy’s husband, Ted. With no other family to lean on, Martha tries desperately to assimilate into Ted and Lucy’s upper-middle-class lifestyle. But nightmares of the cult that brainwashed her into living as Marcy May prevent her from connecting with the only people who may be able to save her. As Martha’s isolation grows, her severe paranoia escalates. Ultimately, she descends into a dizzying state of panic as the growing fear that she is being hunted grips her every move.