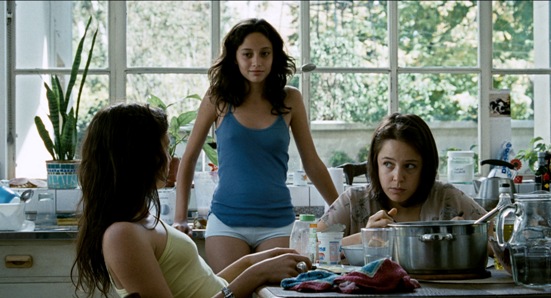 The 55th San Francisco International Film Festival (April 19 – May 3) announced the films in competition for the New Directors Prize and the Golden Gate Awards for documentary features.

Back to Stay
Milagros Mumenthaler, Argentina 2011
U.S. Premiere
Buenos Aires at the end of summer. Marina, Sofia and Violeta are alone in the family home after their grandmother, who had brought them up, has died. This strange situation will affect their interactions with one another and with the world.

Choked
Jong-hyn Kim, South Korea 2011
In a recession-battered Seoul, a young man in the dodgy relocation business must deal with loan sharks and aggrieved parties owed large sums by his vanished entrepreneur mother. Director Kim Joong-hyun gradually turns up the heat and watches his characters boil in this intelligent and nuanced feature debut.

Found Memories
Júlia Murat, Brazil 2011
A young photographer drifts into the tiny Brazilian village of Jotuomba, charming the elders with her camera and learning the fine art of baking bread in this disarming meditation on memory, aging and letting go of the past.

Land of Oblivion
Michale Boganim, France/Ukraine 2011
This compelling debut feature tallies up the fragile human cost of one of the first truly global disasters, the cataclysm at the nuclear power facility at Chernobyl. Ukrainian Bond girl Olga Kurylenko plays emotionally damaged Anya, one of many unanchored survivors whose memories and ambitions are impacted by the strangely magnetic pull of a desolate hometown.

Last Winter
John Shank, Belgium 2011
A young farmer in central France tries to sustain his spiritual connection to the land amid the crushing pressures of modern agriculture in this elegiac drama. Vincent Rottiers is the taciturn Johann, who goes it alone in the landscape he loves, a terrain captured in shimmering cinematography.

Mosquita y Mari
Aurora Guerrero, USA 2011
Set in Huntington Park, near downtown Los Angeles, this earnest and beguiling coming-of-age tale follows two Chicana teens in the midst of the delicate dance of self-discovery and sexual awakening as they explore a new friendship and young love.

Neighboring Sounds
Kleber Mendonça Filho, Brazil 2012
This magnificently sculpted story about life on an upscale street in the bustling city of Recife encompasses an entire city block’s worth of characters, incidents and encounters. The totality becomes symphonic in its structure and power.

OK, Enough, Goodbye.
Rania Attieh, Daniel Garcia, Lebanon 2010
A forty-something Lebanese pastry shop owner who looks like an escapee from a film by Judd Apatow and still lives with his mother is the unlikely protagonist of this marvelously crafted deadpan comedy. After his mother skips town, he searches cluelessly for various maternal substitutes.

17 Girls
Delphine Coulin, Muriel Coulin, France 2011
A young girl’s decision not to terminate an accidental pregnancy sets off something like an airborne outbreak of teen reproduction, transmitted via loneliness and peer pressure, in this startling debut feature based on real-life events.

Valley of Saints
Musa Syeed, India 2012
Using Kashmir’s picturesque Dal Lake as its backdrop and underpinned by the political unrest in the region, this heartfelt drama explores the relationship between two best friends and the female researcher, studying environmental degradation, who threatens to distract them from their dreams of escape.

In addition to these 11 first features in competition, the New Directors section of SFIFF55 includes 19 out-of-competition films, which will be announced at the Festival’s press conference Tuesday, March 27.

Golden Slumbers
Davy Chou, Cambodia 2011
This exceptional documentary summons the spirits of Cambodian cinema’s golden age, which ended during the Khmer Rouge’s reign of terror between 1975 and 1979. Blending interviews with surviving filmmakers, classic songs and poetic examinations of former movie palaces, Golden Slumbers is a testament to the captivating power of art in the face of tragedy.

In My Mother’s Arms
Atia Jabarah al-Daradji, Mohamed Jabarah al-Daradji, Iraq 2011
In violence-ridden Baghdad, one determined man tries to create a safe haven: an independent orphanage with no government support, where 32 Iraqi boys live, eat, play, sleep and go to school together. It is a fragile ecosystem shielding them from a life of suffering and extreme danger.

It’s the Earth Not the Moon
Gonçalo Tocha, Portugal 2011
Filming on the remote Azores island of Corvo, director Gonçalo Tocha aims “to be everywhere at the same time and not miss a thing.” The result is a wonderfully poetic take on the anthropological documentary, the travel essay and the armchair adventure, made with almost naïve sincerity.

The Law in These Parts
Ra’anan Alexandrowicz, Israel 2011
This film, winner of the Sundance 2012 World Documentary prize, offers a rare insider’s view of the logic, structure and moral cost of Israel’s parallel military legal system that governs Palestinians under occupation. Interviews with the men who created and uphold these laws, artfully juxtaposed with archival footage, call into question concepts of justice and rule-of-law.

Meanwhile in Mamelodi
Benjamin Kahlmeyer, Germany 2011
U.S. Premiere
Set against the raucous backdrop of the 2010 World Cup, this beautifully crafted portrait of a place and a family features stunning cinematography and a lively score, as the Mtswenis’ day-to-day struggles and victories echo the promise of a new South Africa.

Off Label
Donal Mosher, Michael Palmieri, USA 2011
An alternatively tragic and bleakly comic road trip through the methods and madness of pharmaceuticals in our culture. Setting personal storytelling against archival and industrial footage, it examines the medicated margins of American life, from the testing, marketing and consumption of pharmaceuticals to the alienation, perseverance and spiritual striving of individuals living in a society that pathologizes our desires for health, happiness and even our sense of identity for profit.

Patience (After Sebald)
Grant Gee, England 2012
This moving tour through the landscape of W.G. Sebald’s genre-bending novel, The Rings of Saturn, presents a multilayered, many-voiced homage to his discursive, elegiac and perfectly illusion-free style by poets, mapmakers, novelists and acquaintances-admirers haunted and inspired by the voice of the German writer, who died in 2001.

Step Up to the Plate
Paul Lacoste, France 2011
Hawkeyed master chef Michel Bras is ready to hand the keys to his Michelin-recognized restaurant in rural southwestern France to his talented son. A sublime, contemplative study of artistry, family and tradition calibrated to the turning of the seasons, this lovely documentary is about much more than food.

Winter Nomads
Manuel von Stürler, Switzerland 2012
North American Premiere
800 sheep, three donkeys, and several dogs are led by two shepherds through Swiss fields and suburbs in a film that combines its beautifully photographed images with a keen ear for sound to situate this vanishing profession and lifestyle within a changing environment.