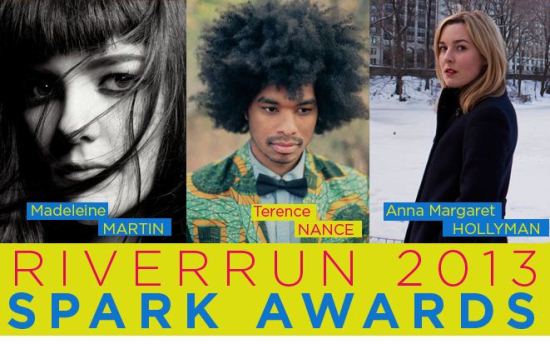 Anna Margaret Hollyman (White Reindeer), Terence Nance (An Oversimplification of Her Beauty) and Madeleine Martin ( The Discoverers) will be honored with RiverRun’s 2013 Spark Award at the 2013 RiverRun International Film Festival.

The Spark Award,which was introduced at the 2012 festival,  is intended to recognize exciting new filmmakers and breakthrough performers who are just on the cusp of gaining wider recognition for their remarkable talents.

The three will be honored at an exclusive VIP-only event on the evening of Friday, April 19th, during the second weekend of RiverRun.

Terence Nance studied visual art and his practice includes installation, performance, music, and moving images. Terence makes music under the name Terence Etc. His first feature film, An Oversimplification of Her Beauty, premiered at the 2012 Sundance Film Festival and went on to play many prestigious festivals. The film has garnered Terence recognition from Filmmaker magazine, where he was selected as one of the 25 new faces of independent film. Oversimplification… also won the 2012 Gotham Award for “Best Film Not Playing at a Theater Near You.” Terence is currently developing his sophomore feature, The Lobbyist.

Madeleine Martin (2nd from right) is best known for her role as Becca Moody, Hank Moody’s (David Duchovny’s) precocious daughter on Showtime’s Californication. In 2009 Madeleine was the recipient of the Marian Seldes’ Most Promising Young Performer Award, and The National Youth Theater award in 2008.  She also stars in a breakout performance alongside Griffin Dunne in Justin Schwarz’s debut feature film The Discoverers, an official selection of RiverRun 2013 screening in the Focus section.