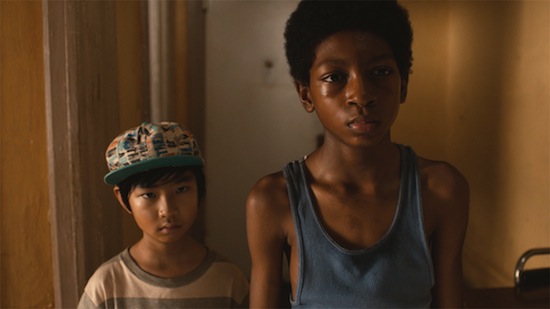 The Inevitable Defeat of Mister and Pete

The Chicago International Film Festival announced the first 21 feature-length and short films, a preview of the more than 150 films that will be presented during the 49th edition of the festival taking place October 10 – 24, 2013.  Films include THE INEVITABLE DEFEAT OF MISTER AND PETE directed by George Tillman which follows 13-year-old Mister whose mother, played by Chicago native Jennifer Hudson, is apprehended by the police, leaving Mister and his nine-year-old brother Pete alone to forage for food while dodging child protective services and the destructive scenarios of the projects.

BIG BAD WOLVES (Directors: Aharon Keshales, Navot Papushado • Israel): When the lead suspect in a brutal child murder is released due to a police blunder, a vigilante police detective and a grieving father take the law into their own hands in this fantastically intense, darkly funny revenge thriller from one of the pioneers of Israeli horror cinema.

BLUE IS THE WARMEST COLOR (Director: Abdellatif Kechiche • France): Teenager Adèle’s life is turned upside down the night she meets blue-haired Emma in this scandalous winner of the top prize at Cannes. Adèle’s passionate sexual awakening and the couple’s ensuing relationship – spanning several years – are depicted in searing, intimate detail with sharp, controlled direction and breathtaking performances from the two leads.

ELAINE STRITCH: SHOOT ME (Director: Chiemi Karasawa • USA): A ferocious, funny and poignant portrait of the one-of-a-kind Broadway legend as she reaches her 87th year, “Elaine Stritch: Shoot Me” showcases the brash, uncompromising Tony and Emmy Award-winner both onstage and off. Stritch’s inimitable personality is on full display in this hilarious, affectionate tribute.

THE GIRLS ON LIBERTY STREET (Director: John Rangel • USA): A teenager on the verge of leaving for the army, Brianna spends her last week at home trying to mend tensions with her friends and family. Eschewing melodrama, the film imbues this simple story with a deft style and effortlessly natural performances, creating an assured portrait of a young woman in transition.

GRIGRIS (Director: Mahamat-Saleh Haroun • Chad): Despite a paralyzed leg that keeps him on the fringes of society, Grigris comes alive at the local nightclub, tearing up the dance floor every night. When a relative falls critically ill, the desperate Grigris turns to black market kingpin Moussa to pay the hospital bills and soon finds himself in over his head.

HELI (Director: Amat Escalante • Mexico): In a misguided attempt to finance his elopement with 12-year-old Estela, police cadet Beto steals two large packages of cocaine, setting off a string of increasingly violent consequences for him and for Estela’s family in this unflinching look at the cycle of drugs and violence in contemporary Mexico.

THE INEVITABLE DEFEAT OF MISTER AND PETE (Director: George Tillman • USA): During a sweltering summer in New York City, 13-year-old Mister’s hard-living mother (Jennifer Hudson) is apprehended by the police, leaving Mister and his nine-year-old brother Pete alone to forage for food while dodging child protective services and the destructive scenarios of the projects. “The Inevitable Defeat of Mister and Pete” is a beautifully observed, moving film about salvation through friendship.

LIKE FATHER, LIKE SON (Director: Kore-eda Hirokazu • Japan): The lives of success-driven architect Ryota and his shy wife Midori are turned upside down when they discover that, due to a hospital mix-up six years earlier, their son Keita is not their own. The foundations of their identities as loving parents begin to crumble as they meet their biological child.

THE MISSING PICTURE (Director: Rithy Panh • Cambodia): How do you document a genocide when no footage of the atrocities exists? Rithy Panh attempts to answer this question in this Cannes prize-winning film recounting a childhood under the Khmer Rouge, illustrating his memories with hand carved clay figures. This innovative documentary explores the intersection of historical memory and the power of images.

MONSOON SHOOTOUT (Director: Amit Kumar • India): As heavy monsoon rains lash Mumbai, rookie cop Adi raises his gun to a criminal and must decide whether or not to pull the trigger. “Monsoon Shootout” presents three alternate scenarios, each sending Adi spiraling on a downward journey that pits him against fate and a system that presents a quagmire of moral ambiguity.

MY SWEET PEPPER LAND (Director: Hiner Saleem • Iraq): A godforsaken border town in newly-autonomous Kurdistan serves as the setting for this Western-inspired tale of justice and honor. Both Baran, a former Kurdish independence war hero, and Govend, a beautiful young woman defying tradition to become a teacher, are determined to see order and civilization restored to their damaged country.

SALVO (Directors: Fabio Grassadonia, Antonio Piazza • Italy): Mafia hitman Salvo is solitary, callous, and ruthless. His deep-rooted cold-bloodedness is tested, however, when, on his latest job, he discovers his target’s sister, a blind woman named Rita. Disturbed by her unseeing stare, Salvo spares her life, fully aware of the inexorable consequences of this ill-fated choice.

UNDER THE RAINBOW (Director: Agnès Jaoui • France): “Look At Me” writer-director-star Agnès Jaoui returns with a witty, charming, modern day mélange of familiar fairy tales. When young Laura meets Sandro at a party, she thinks she may have met her Prince Charming. And then she meets Maxime. Laura must choose between them as they, and their families, deal with the tragicomic realities of romance.

WALESA: MAN OF HOPE (Director: Andrzej Wajda • Poland): Legendary director Andrzej Wajda tells the inspiring story of Lech Walesa, Nobel laureate and Poland’s first post-Soviet president. The charismatic Wałesa rises from the shipyard to union leadership and becomes the voice and face of the growing solidarity movement, standing up to the feared Soviet Union and leading Poland’s fight for independence.

DIE WELT (Director: Alex Pitstra • Tunisia): In the summer of 2011, Tunisia is finally free of its dictatorial shackles, but 23-year-old Abdallah still dreams of escaping to Europe. Following a chance encounter, Abdallah’s passion to reach the other side of the Mediterranean burns brighter than ever before, prompting a desperate gamble for escape.

WILL YOU STILL LOVE ME TOMORROW? (Director: Arvin Chen • Taiwan): Introvert Weichung’s measured life as a family man is shaken when a chance encounter revives feelings from his long suppressed gay past, forcing him to choose between love and security. Fantastical flourishes color this bittersweet romantic comedy that is all at once wise and funny in its exploration of formal notions of family, sexuality, and friendship.

Short Films: Highlights from this year’s program include: 23-year-old Tim attempts to seduce the ladies, but his stutter gets in the way in “Stammering Love.” In “Needle,” a young girl’s feelings about her parents’ divorce are explored when she goes to get her ears pierced. A teenager develops an awkward attraction in “Peach Juice.”