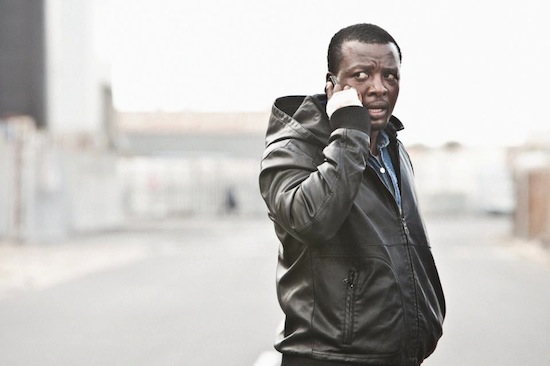 African films will get international exposure at 49th Chicago International Film Festival, thanks to a three-year grant from the Academy Foundation of the Academy of Motion Picture Arts and Sciences.  The Spotlight Africa Program, the third year of the World Cinema Spotlight Program will highlight films from across the African continent including MANDELA: A LONG WALK TO FREEDOM, OF GOOD REPORT and the World Premiere of BLACK SOUTH-EASTER.  The 49th Chicago International Film Festival runs October 10 to October 24, 2013.

The Battle of Tabatô Guinea-Bissau/Portugal (Director: João Viana) – After years of European exile, Imatur returns to his native village of Tabatô to attend his daughter’s wedding, his head still saturated with horrific visions of a war he fought long ago. When tragedy strikes on the road to Tabatô, the entire village must come together in this entrancing, surreal film that blends music and magic with the lingering effects of Guinea-Bisseau’s history. US Premiere.

Black South-Easter South Africa (Director: Carey McKenzie) – When a body washes up on a Cape Town beach, ambitious township cop Sizwe seizes the opportunity to prove himself and earn the promotion he desperately needs. But when the investigation leads him to a black market smuggling ring, Sizwe is caught in the middle of a deadly power play orchestrated by an old friend. With no one left to trust, Sizwe must take the law into his own hands in this gritty crime drama. World Premiere.

Burn It Up Djassa Ivory Coast/France (Director: Lonesome Solo) – Shot on a miniscule budget but positively bursting with style and energy, this hugely inventive DIY crime thriller follows Tony, a young cigarette seller in an Abidjan ghetto. Ignoring the pleas of his policeman brother to stay on the right side of the law, Tony gets increasingly mixed up in local gambling and criminal activities until a moment of violence puts him on the run from the law. Chicago Premiere

Comrade President Zimbabwe (Director: Mosco Kamwendo) – An inspiring portrait of Mozambique’s founding president, Comrade President traces the life and legacy of revolutionary leader Samora Moisés Machel. At the forefront of a popular uprising, Machel helped establish a fledgling government and continued fighting for justice until his suspicious death in 1986. With candid interviews from those who knew Machel best – including his opponents – this documentary examines the indelible legacy of a revolutionary hero. US Premiere

Grigris Chad (Director: Mahamat-Saleh Haroun) – Despite a paralyzed leg that keeps him on the fringes of society, Grigris comes alive at the local nightclub, tearing up the dance floor every night. When a relative’s hospital bills start piling up, Grigris must turn to the black market for work. After double-crossing his new boss in a desperate attempt at fast money, Grigris finds himself on the run in this sensitive depiction of a desperate, marginalized man by one of Africa’s most celebrated directors. Chicago Premiere

Imbabazi: The Pardon Rwanda (Director: Joel Karekezi) – Best friends Manzi and Karemera find themselves on opposing sides in Rwanda’s ethnic civil war, with Tutsi Karemera’s family paying a horrific price for Manzi’s allegiance to his Hutu heritage. When Manzi is released from prison fifteen years later, his return re-opens old wounds. Filmmaker Joel Karekezi draws from his own experience as a survivor of Rwanda’s violence in creating this moving account of two former friends who must contend with the unimaginable horrors in their past. Chicago Premiere

Malak Morocco (Director: Abdeslam Kelai) – When 16-year-old Malak discovers that she’s pregnant, she quickly finds herself alone in a community that marginalizes and mistreats single mothers. Abandoned by the baby’s father, shunned by her family, and in dire need of cash, Malak is forced to take desperate measures. An elegantly-photographed portrait of a young woman’s struggles, Malak garnered major awards at Morocco’s National Film Festival, including the Jury Prize, Best Screenplay, and Best Actress for its young star Chaimae Ben Acha. US Premiere

Mandela: A Long Walk To Freedom UK/South Africa (Director: Justin Chadwick) – Mandela: A Long Walk To Freedom is based on South African President Nelson Mandela’s autobiography of the same name, which chronicles his early life, coming of age, education, and 27 years in prison before becoming President and working to rebuild his country’s once segregated society. Idris Elba (Prometheus) stars as Nelson Mandela, and Naomie Harris (Skyfall) stars as Winnie Mandela, with Justin Chadwick (The Other Boleyn Girl) directing. Chicago Premiere

Of Good Report South Africa (Director: Jahmil X. T. Qubeka) – This modern day film noir tracks Parker, a shy high school teacher arriving at a new school. While he is earnest in his passion for teaching, his extra-curricular attentions are drawn to a gorgeous young woman. When he realizes she is a student at his very school-and forbidden fruit-he grows increasingly obsessed. When the girl goes missing, a female detective comes snooping around, fueling Parker’s unstable, even dangerous, behavior as she gets closer to the shocking truth. US Premiere

Something Necessary Kenya/Germany (Director: Judy Kibinge) – Anne struggles to rebuild her life after Kenya’s civil unrest has killed her husband, gravely injured her son, and left her isolated farm in ruins. Joseph, a quiet and troubled young gang member who took part in the countrywide violence, is drawn to Anne and her farm, seemingly in search of connection and redemption. This powerful story of forgiveness and reconciliation presents an intimate look at the aftermath of violence on both perpetrators and victims. US Premiere

Die Welt Netherlands/Tunisia (Director: Alex Pitstra) – In the summer of 2011, Tunisia is finally free of its dictatorial shackles, but 23-year-old Abdallah is still a slave to his mundane life, dreaming of an escape to Europe -or “die Welt”- to fulfill his dormant ambitions. Following a chance encounter with Dutch tourist Anna, Abdallah’s passion to reach the other side of the Mediterranean burns brighter than ever before, prompting a desperate gamble for escape in this at turns comic and heartbreaking story. Chicago Premiere

Yema Algeria (Director: Djamila Sahraoui) – In an isolated house on a drought-stricken mountainside, Ouardia must bury the body of her son Tarik, a victim of the civil conflict waging between the government and the fundamentalists. She suspects her other son, Ali, a mujahedeen fighter, has had a hand in the killing. And their mutual distrust is evidenced in the young soldier that Ali has sent to guard her. Beautifully capturing the expansive Algerian countryside this minimalist tale of a single family’s tragedy takes on mythic proportions. Chicago Premiere

Shorts 5 Spotlight Africa – From Earth’s Center – These award-winning African short films tell us stories rich with sympathy and symbolism, hailing from across the continent and beyond.

A Ghanaian family, lost in America, travels to a Louisiana church to find a cure for its problem child in Boneshaker(USA). A majestic drag queen descends into a breakdown in Nairobi’s iconic central station in Fluorescent Sin(Kenya). When two best friends photograph a gigantic fish leaping out of the sea, their small town blossoms into a tourist hot spot in Jonah (Tanzania/UK). In a township divided by an age-old feud, a boy falls in love with a girl from the other side of town in KanyeKanye (South Africa). An old man is getting ready to go to an important meeting in Siggil (France/Senegal). When a small boy catches her with her lover, Fatine must pay a terrible price in The Curse (Morocco, UK). Yellow Fever (Kenya/UK) reflects on the effects that globalization is having on the African woman’s understanding of beauty.