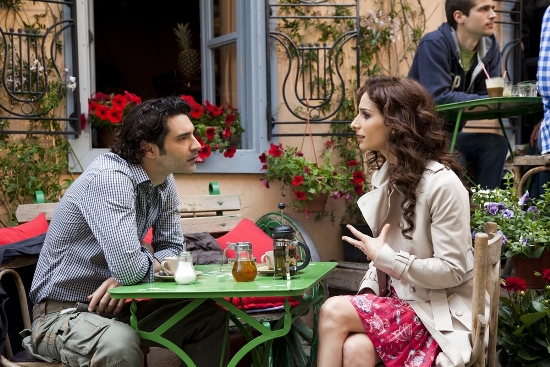 Christoforos Papakaliatis in “WHAT IF…”

Celebrating its 20th anniversary the 2013 Greek Film Festival (GFF) has announced its full program of films, many of which have made their mark on the international film festival circuit.  This year’s festival slate once again presents the best of contemporary Greek cinema with a program that will see 35 films including 9 shorts screen at the Palace Como in Melbourne and Palace Chauvel in Sydney. The festival will open in Brisbane on Thursday 31 October at Palace Centro, followed by Sydney on Wednesday 6 November and in Melbourne on Thursday 7 November with Greece’s box office smash hit, WHAT IF… The GFF then continues its tour to Adelaide (14 – 17 November at Palace Nova Eastend) and Canberra (29 November – 14 December at Palace Electric).

An adonis of the small screen, Christoforos Papakaliatis makes his leap to the big screen as both actor and auteur in a story about love set against the backdrop of the economic crisis. In a Sliding Doors style of storytelling WHAT IF… highlights the precarious nature of life and how much our future can be affected by a single life-changing decision.

Over two weeks later the captivating financial thriller, CAPITAL (Le Capital), will close the festival in Sydney and Melbourne on Sunday 24 November. In this ambitious and thrilling melodrama which screened at the 2012 Toronto International Film Festival, filmmaker Costas-Gavras  (known for his political thrillers, including the Oscar-winning Z) returns to familiar territory with this persuasively-detailed tale of boardroom politics, remorseless backstabbing and the evils of capitalism.

Alongside the full program Eleni Bertes has also been announced as a guest of the festival.  Eleni is one of the former founders of the GFF in Australia and is currently producing films in Greece, including Joy which is part of this year’s program – a startling narrative from director Ilias Yannakakis, who recounts the story of a middle-aged woman accused of kidnapping a newborn baby from a maternity ward.

From the Greek Weird Wave the GFF screens Elina Psykou’s self-assured debut – THE ETERNAL RETURN OF ANTONIS PARASKEVAS. This engaging off-beat film played at this year’s Berlinale and Toronto IFF and follows a famous Greek TV anchorman played by Christos Stergioglou (Dogtooth, GFF ‘10) who fakes his own kidnapping in a desperate bid to salvage his ailing career.  Also from Toronto the GFF brings veteran editor Yannis Sakaridis’s directing debut WILD DUCK, shot on a micro-budget, guerrilla-style in the wake of the country’s 2009 debt crisis. Smart, introspective and politically charged, the story loosely parallels the 2005 ‘Greek Watergate’ phone-tapping scandal when a pair of telephone engineers are enlisted to investigate a hacking.

There’s a strong documentary contingent in this year’s program too; Director Kostas Vakkas challenges the dominant stereotype of success and entrepreneurism in Greek American history in his direct and highly informative documentary, GREEK AMERICAN RADICALS: THE UNTOLD STORY. Much more than just a story about politics, Dimitris Athyridis’ ONE STEP AHEAD is a poignant documentary odyssey following the unconventional Yiannis Boutaris as he stands for independent candidate in the 2010 mayoral campaign of Thessaloniki. The GFF will also be holding a special free event screening of Zoe Mavroudi’s incendiary documentary RUINS, which chronicles the shockingly blatant witch-hunt of a group of HIV positive women accused of prostitution.

Greece’s creative talents are also featured in the beautiful and gripping family drama THE TREE AND THE SWING, from director Maria Douza, who delivers a powerful, multi-layered tale of one family’s estrangement, channelling universal themes of acceptance, love and repentance. Other festival highlights include Vasilis Kehagias’ uplifting LOVE IN THE END, where three real-life stories of unfulfilled love get the happy ending they never had; the poignant DO NOT FORGET ME ISTANBUl, where seven talented filmmakers of different nationalities come together in a portmanteau feature to remind audiences that this cosmopolitan city does not only belong to the Turkish people; and one of the most unique films of the 2013 GFF – BIG HIT – a noir ‘dead ringer’ from filmmaker Karolos Zonaras, which features  femme fatales, tough guys, pithy one-liners, long shadows and dramatic music stings.

As part of the 20th anniversary celebration the GFF has selected nine festival favorites to be included in this year’s special ‘best of’ program strand. The films include the multi award winning narrative A TOUCH OF SPICE – a nostalgia-steeped parable from writer-director Tassos Boulmetis, that touched the hearts of all who saw it becoming the biggest hit at the Greek box office; FEMALE COMPANY from director Nicos Perakis, which follows six emotionally-deprived, sexually-underrated wives who take matters into their own hands by renting an apartment where amorous activities abound in this lively satire; and Sotiris Goritsas’ tragi-comic road movie BALKANISATEUR which follows  35 year-old ‘teenagers’, Fotis (Stelios Mainas) and Stavros (Gerasimos Skiadaresis), on a misguided highway to Switzerland as they plan to get rich quick through a currency scam.

Lighten up your days with a wonderful selection of Greek comedy favourites from over the years including the comedy classic, BONUS, from acclaimed filmmaker Nikos Zapatinas, who proves that some laughs are universal in this infinitely appealing film about a garbage collector on the brink of retirement; Zapatinas’ Greek comedy blockbuster IN GOOD COMPANY is also featured in the ‘best of’ program, where raunchy and scatological misadventures unfold when a madman and petty criminal’s worlds collide; and the return of filmmaker Dimitris Indares’ uncomplicated and very human comedy, TOTALLY MARRIED, which wrestles with the much-debated phenomenon of the ‘seven year itch’, but does it Greek-style.

Acclaimed filmmaker Constantinos Giannaris will also feature two of his films in the ‘best of’ program. FROM THE EDGE OF THE CITY follows the leader of a gang of Kazakhstani youths who live on the outskirts of Athens – where clubbing, drugs, prostitution and petty thievery is an everyday part of life. Giannaris’ gritty depiction of this urban reality won him Best Director and the Greek Film Critics’ Prize at the Thessaloniki IFF.  Realist tones continue in Giannaris’ poignant narrative ONE DAY IN AUGUST which weaves together four different stories over 24 eventful hours. The film screened at Berlin, Chicago and Melbourne and won best screenplay at Troy and the Critics’ Prize in Thessaloniki.

The GFF program also houses a selection of nine Greek shorts including, Athina Rachel Tsangari’s (Attenberg, GFF ‘11) hauntingly beautiful short THE CAPSULE which has screened in numerous festivals including Toronto and Sundance and YOU KNOW WHAT? I LOVE YOU – a debut from Melbourne filmmaker Natalie Cunningham, a joyous meditation on family, heartbreak, adversity, and memory. The eight local shorts will screen in one program as part of the Greek-Australian Short Film Festival on Thursday 21 November, competing for the Napoleon Perdis Award for Best Short Film.

The Greek Student Film Festival and Competition returns for its 4th year in 2013, presenting another selection of imaginative films from local primary, secondary and tertiary students.