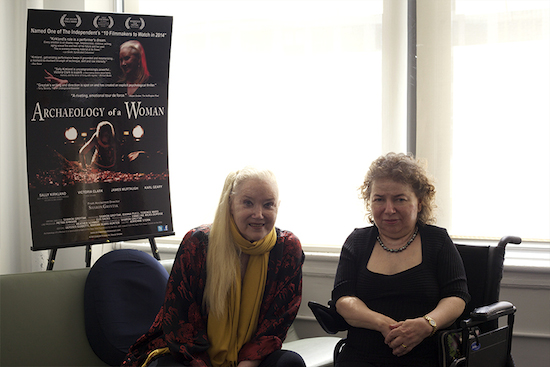 Award-winning indie filmmaker Sharon Greytak’s ARCHAEOLOGY OF A WOMAN, starring Oscar nominated/Golden Globe winner Sally Kirkland is playing at Village East Cinema Sept. 12-18.   ARCHAEOLOGY OF A WOMAN, is described as a gripping drama of a woman’s fierce determination to save her mind from spiraling into delusion as she attempts to keep a chilling secret from her past buried.

We recently sat down with director Sharon Greytak, one of the only disabled filmmakers directing, writing and producing from a motorized wheelchair, and Sally Kirkland, sporting a bandaged knee, the result of knee surgery. Earlier this year Sally fell, breaking her leg in two places while attending the Studio City Film Festival to receive an award for Best Actress.

VIMOOZ: The film took a while to be released, why did it take so long?

Sally Kirkland: Well you did 2 edits

Sharon Greytak: Yes. I did the initial edit and then I decided to do a bit more editing. I describe the process as being like a rose, and you want to remove anything that takes away from the beauty of it. So I simplified a couple of things – I sort of pruned away a few things that I thought would make it stronger. 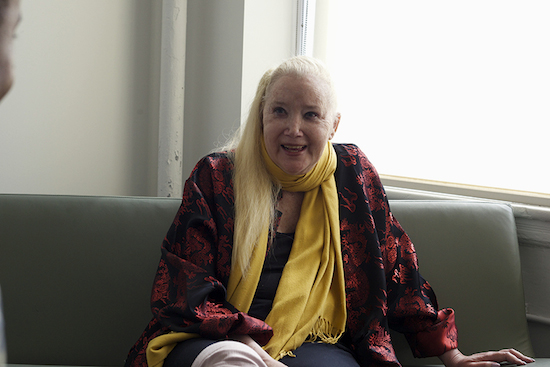 VIMOOZ: Now Sally, we have to ask about the topless scene. How did you react when you read that in the script?

Sally Kirkland: I liked it. A little bit of history you may not know, I was the first nude actress in American theater in 1968 with Terrence McNally’s Sweet Eros.  I’ve been nude in so many films you can’t believe it. I loved that she did that because it got me a chance to show people about dementia and the Alzheimer – people who don’t know where they are, or what they are doing.

Here she is, putting her bra in the refrigerator; it is such a classic piece of writing to demonstrate the pathetic stage of Margaret.

I felt great, to answer your question.

VIMOOZ: Is there anything you will not do in a film? 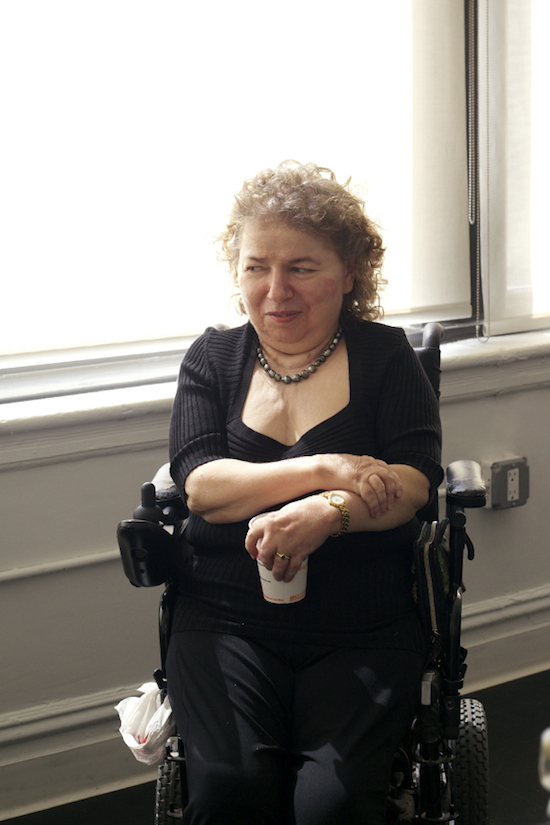 VIMOOZ: The story is very original. Where did you get the idea?

Sharon Greytak: It stemmed from my experience with my own mother who was starting to have some issues of confusion and some really early signs of dementia.

In many movies, you always see a character that’s in the late stages of Alzheimer, spiraling downhill.  The audience is superior and watching this poor character – it is so sad and a tearjerker.   You never see a character that is functioning socially, but is having these terrible moments in the early stages of dementia. And I thought, how do you show a character like that?  Where they are fiercely independent, they are very verbal, and they are use to running their own lives.  And they are certainly not going to give in and say OK this is it.  That is the character that I wanted to portray.

VIMOOZ: Tony-winner Victoria Clark plays Sally’s daughter and the resemblance is amazing.  How were you able to make that connection with casting?

Sally Kirkland: A lot of people say that.

Sharon Greytak: I went for the best talent – the best actress I can get. I worked with a casting director who helped me. I went from an isolated writer one day to having managers and agents calling setting up meeting the next.

VIMOOZ: Sally, You’ve been in the business a very long time.

VIMOOZ:  Do you stay up to date with all the latest stuff like social media?

Sally Kirkland: I’m a Facebook freak. I was on the plane the other day Facebooking everybody.  And I have friends coming in town for a movie premiere and I’m literally chatting away with them on the plane.

VIMOOZ: What about you Sharon?

Sharon Greytak:  I do. Of course

Sally Kirkland: You have to. Well, you have to tell the story.

Sharon Greytak: You do.

Sally Kirkland: Ok. So I get the call from my agent, and he says, “I have this fabulous role for you. “ And it was Friday, and I said, “great, when can I see it?”  He replied, “I’ll send it with a messenger.” The messenger came and I read it in an hour and 20 minutes or something and I thought, “Oh my God, I have to do this role”

But it’s Friday now, and all the offices are closed, so I couldn’t think what to do with my patience, my energy and determination. And so I went to Facebook and I looked up Sharon Greytak and there she was. She didn’t have a picture but she had a page and I requested her to be my friend.

But I didn’t mention the film because I thought that might be overboard. But I just wanted to get my foot in the door. So then what happened?

Sharon Greytak: I had no idea she had the script.  And when the breakdowns went out, I thought it was funny, all of a sudden my IMDB rating skyrocketed.    On Facebook, everyone was friending me left and right. I was telling friends that this was hysterical. I found this humorous. And I’m going through the list and I see Sally Kirkland. And I was like, “Really, Sally Kirkland?” So I accepted. And the weekend goes by and Monday I get a call saying, be at your phone on Tuesday, Sally Kirkland will call you.   I had no idea she had the script all weekend.  And on Tuesday she called and we talked on the phone for 3 hours.

Sally Kirkland: It was an hour.

Sharon Greytak:  It was 3 hours.

Sally Kirkland: We talked for 3 hours? I want you to put that on record.

Sally Kirkland: So yes, I was by my phone, and 7:30 she called. And we talked about the script, the character.  It was so gratifying that somebody outside of myself got the character and understood what I was writing.  And she was so smart about it.

And we exchanged some personal stories, and it was a done deal.  This is it. I don’t want to see anyone else.

VIMOOZ: What are 2 things we don’t know about Sally Kirkland.

Sharon Greytak: Should I step outside the room?

Sally Kirkland: I’m deaf in my left ear. I have tinnitus in my right ear. And I’m in love with Michael Fassbender.

VIMOOZ: What about you Sharon?

Sharon Greytak: Oh no.  I’m a director, you don’t get that stuff from me.

VIMOOZ: That counts as one, two more to go.

Sharon Greytak:  I think one is green and one is blue, which is the same as David Bowie.  There you go.