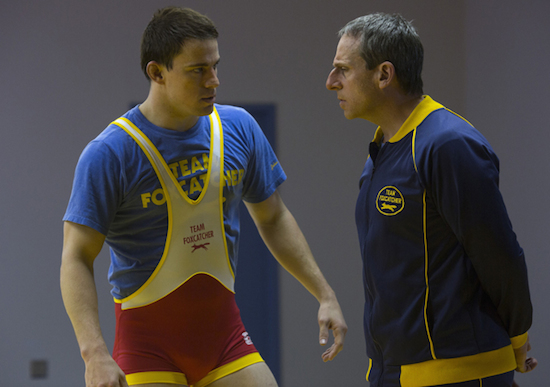 FOXCATCHER tells the story of Olympic Gold Medal-winning wrestler Mark Schultz (Tatum), who sees a way out from the shadow of his more celebrated wrestling brother Dave (Ruffalo) and a life of poverty when he is summoned by eccentric multi-millionaire John du Pont (Carell) to move onto his estate and train for the 1988 Seoul Olympics.  Desperate to gain the respect of his disapproving mother, du Pont begins “coaching” a world-class athletic team and begins to lure Mark into an unhealthy lifestyle and erodes the athlete’s already shaky self-esteem.  Fueled by du Pont’s mercurial personality, increasing paranoia and alienation from the brothers, the trio is propelled towards a tragedy no one could have foreseen.  Based on actual events, FOXCATCHER, directed by Bennett Miller, is a gripping and profoundly American story of brotherly love, misguided loyalty, and the corruption and emotional bankruptcy that can accompany great power and wealth.

”Bennett Miller and the film’s incredible cast are going to close the festival and our last night at the iconic Dolby Theatre with an enthralling psychological drama that is one of the highlights of American independent filmmaking this year,” said Jacqueline Lyanga, Director, AFI FEST.

AFI FEST will take place November 6 through 13 in Hollywood, CA, at the Dolby Theatre, the TCL Chinese Theatre, the Chinese 6 Theatres, the Egyptian Theatre and the Hollywood Roosevelt Hotel.  As previously announced, the Opening Night Gala will be the world premiere of A MOST VIOLENT YEAR (DIR J.C. Chandor) on Thursday, November 6 and Sophia Loren will be honored with a special Tribute on Wednesday, November 12.

Documentary MONK WITH A CAMERA: The Life and Journey of Nicholas Vreeland Sets Release Dates