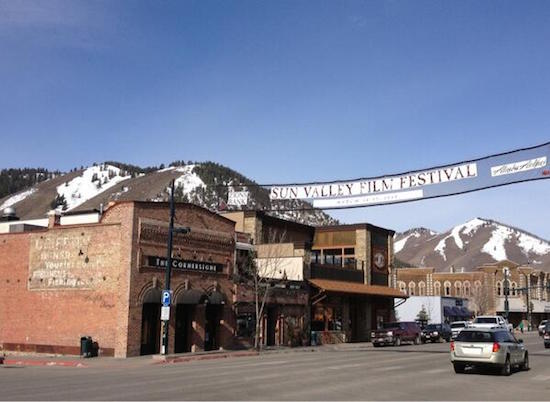 For 2015, the Festival has added a 5th day of programming and will screen more than 60-curated films followed by filmmakers Q &A sessions. Other special programs on tap are the free, standing-room only Coffee Talks with industry insiders like legendary actor Bruce Dern, the Screenwriters Lab led by Academy Award® winners Jim Rash and Nat Faxon, screenwriters of The Descendants, and the new Film Lab. Great parties, dinners, special events, and sunny spring skiing will surely top off this spirited and inspired festival weekend in Sun Valley.

Film Screenings: A curated selection of over 60 films including world premieres, shorts, narratives, and documentaries from around the globe.

Coffee Talks: Two-time Academy Award® nominee Bruce Dern, will be a featured guest at one of the Coffee Talks, during the 2015 Sun Valley Film Festival (SVFF) taking place March 4-8, 2015. The Coffee Talks are free, hugely popular, informal forums for film buffs, featuring inside-the-velvet- rope discussions with top talent from both in front of and behind the camera. Past speakers have included Jodie Foster, Kevin Smith and Mariel Hemingway. Mr. Dern is the first confirmed guest for the Coffee Talks at the 2015 Sun Valley Film Festival.

Mr. Dern, who has appeared in over 80 films, was nominated as Best Supporting Actor for the 1978 film Coming Home and Best Actor for the 2013 film Nebraska. He has had a long and illustrious career spanning over 55 years, during which time he has been the recipient of numerous awards and accolades including the Best Actor award at the 2013 Cannes Film Festival for his role in Alexander Payne’s Nebraska. Often playing unsympathetic characters in supporting roles, he has amassed an impressive body of work over his legendary cinematic calling.

Screenwriters Lab: Jim Rash and Nat Faxon, the Academy Award®-winning writers of The Descendants and 2014’s comedy, The Way Way Back, will host the 2015 Screenwriters Lab. The Screenwriters Lab, one of the many highlights of the Festival, is now accepting submissions for The High Scribe screenplay competition, which gives finalists, among other things, an opportunity for one-on-one meetings with some of the industry’s finest to discuss their work. The 2015 High Scribe judge and mentor will be film, television, and stage actor, Will McCormack. The High Scribe winner will be announced during the lab on March 5th, 2015, and a scene from their script will be brought to life.

Saturday Night Awards Bash: Hailing from Jackson, Mississippi, indie-rock band The Weeks will bring their brand of southern-fried rock to Whiskey Jacques on Saturday night during the Awards Bash.  Formed while teenagers in 2006, they have quickly amassed a loyal following with their soulful country rock sound and have recently wrapped a European tour with The Kings of Leon.

NEW! The Film Lab: This new program brings together a film’s creative forces – the writer, producer and director – in a combustible fashion.  From the writer’s pages to the screen, the audience will enjoy interactions and discussions with filmmakers in an innovative way.

NEW! One Potato Short Screenplay Competition:  The latest addition to our menu is the new One Potato short screenplay competition, which awards the screenwriter a $2500 stipend to go towards shooting their film in Idaho. The competition is part of a larger initiative to encourage filming in the state. As the producing partner on the film, SVFF will connect the winner with seasoned filmmakers, consultants, and production resources.

Wild To Inspire: Nat Geo WILD, in partnership with SVFF and the African Wildlife Foundation (AWF), is launching its second annual filmmaking competition WILD TO INSPIRE. The competition will give one lucky winner a shot at international travel for a Nat Geo WILD dream job – the opportunity to travel to Africa and document wildlife for Nat Geo WILD viewers.  The winner will share their wildlife adventure through a variety of media including video diaries, photos, social media and more as part of an online companion to Nat Geo WILD’s Destination Wild series. The WILD TO INSPIRE film competition will accept submissions from November 3, 2014, through January 16, 2015. More information and complete rules visit natgeowild.com/wildtoinspire.

Future Filmmakers Forum: A unique program that allows middle and high school students to experience the process of filmmaking, film submission and festival attendance.  SVFF will select and screen the best student short films and will award cash prizes for the best overall film and best film by an Idaho student.

SVFF Awards:  A total of seven special awards are presented including two unique to SVFF – One in a Million is awarded to a standout film produced for under $1 million and the Vision Award recognizes an outstanding producer.